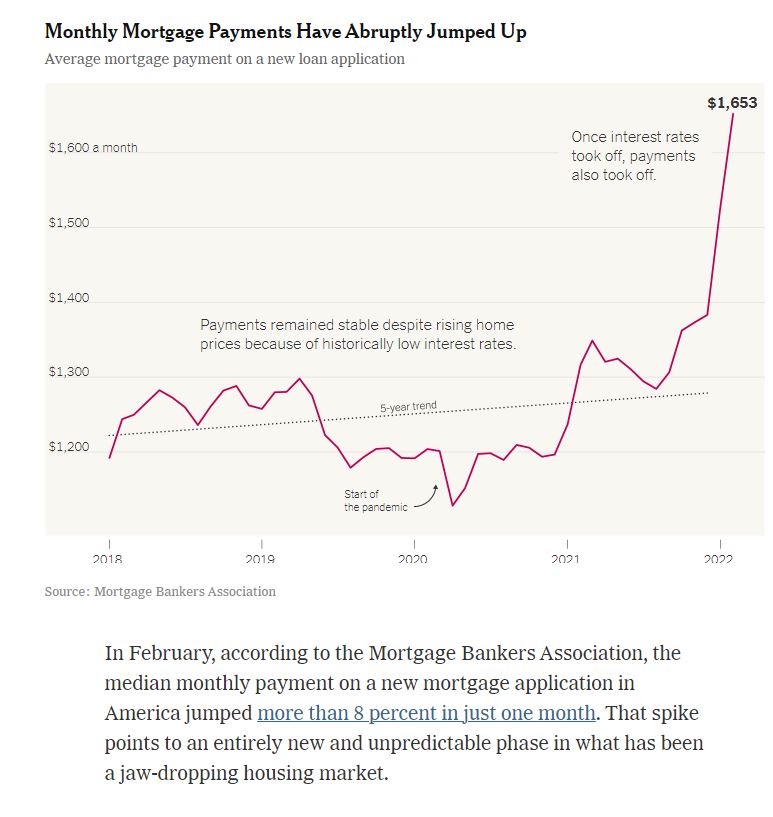 The mainstream media is taking their shots at explaining the current market.

Here is the attempt by the NYT – link should be unlocked:

Here’s a former realtor who says if it weren’t for the investors, we’d be back to normal:

Economists like to focus on demand, but as long as the supply is scarce, prices will hold or keep going up. 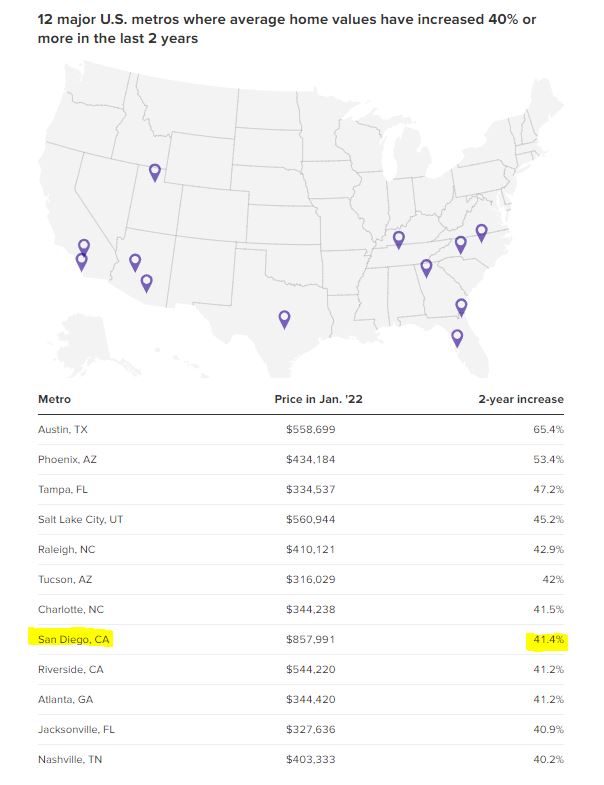 Sure all the California-feeder towns have risen 40% to 50%, but look at those price points!  You don’t see any other city on this list with home prices as high as ours.

Of all the areas in the country, San Diego has to be one of the best places to live – and the affluent who can live anywhere have to be considering San Diego as one of their top choices.

But nobody wants to leave!  We are currently offering millions of dollars to long-time homeowners to get them to move, and it’s not working! The supply and demand has never been so out of balance.

Eventually, we could have the highest home prices in the country! 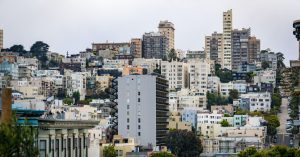 The San Diego housing market is a popular choice for those who are leaving the Bay Area (population of 6,404,512 in the five counties). It’s looks like more are coming – a report from sfgate:

“It’s the cost of living, high housing costs. I think that is the dominant thing. It’s housing housing housing,” said Russell Hancock, President and CEO of Joint Venture Silicon Valley, in a press briefing. “…That is driving almost all of the results.”

Hancock said the 53% figure is the highest percentage of people who have said they want to leave the Bay Area compared to previous polls conducted outside of Joint Venture.

Indeed, an overwhelming majority of respondents said it’s high housing costs (77%) and cost of living (84%) spurring their desire to seek out greener pastures. Homelessness, wildfires and drought were also issues respondents considered when mulling the decision to leave the Bay Area.

“We’ve long been a high-stress region. Staggering housing prices, rising homelessness, a stark income divide and a host of sustainability challenges have had us on edge for some time,” Hancock writes in the introduction to the poll. “But when you toss a highly infectious disease into the mix you get a smothering amount of anxiety.”

But as Hancock noted, these feelings go beyond the pandemic and its challenges.

The poll paints a disturbing picture of life in the Bay Area, but it’s not all doom and gloom. About 65% of respondents said “they feel a strong sense of belonging to the Bay Area” — even more so than they feel connected to their neighborhood and city. Many (66%) applauded their employers’ response to the pandemic and now feel differently about their work-life balance.

As Hancock pointed out in the briefing, polls “tell us how people are thinking. And that’s worth knowing.”

“Perception,” he added, “is also a form of reality.”

If there were 56% of their population who left, it would equal 3,586,526 people – which would create a whole new experience for those who stay!  But we know that talk is cheap, and once all the other variables are considered, most people don’t move.

But we’ll probably get a steady flow for the foreseeable future.

Yesterday, Derrick discussed the macro-economic forces that will affect real estate for years to come: 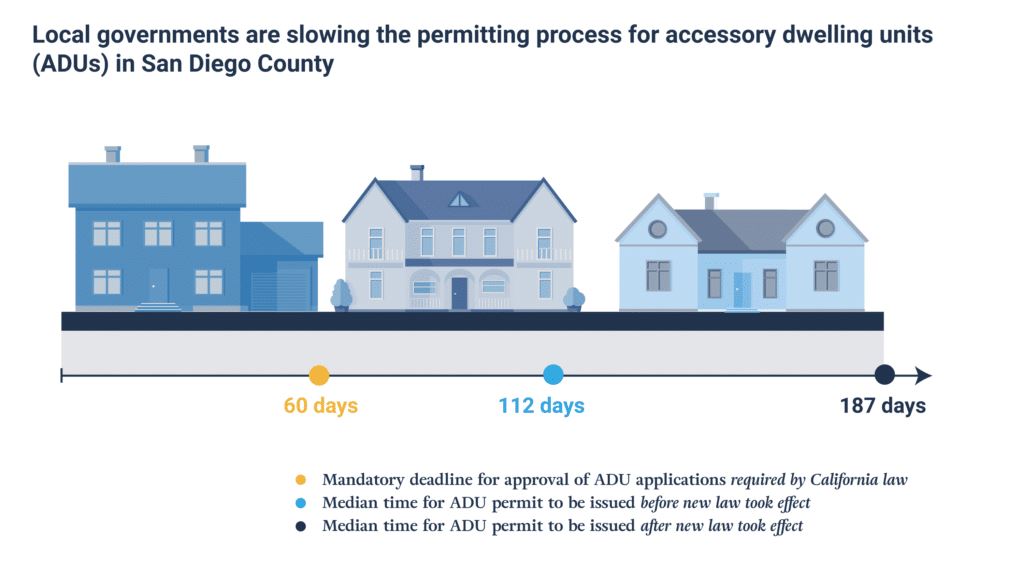 Last month, we heard from an architect on how bad the ADU permit process had been in San Diego.

Now here’s a report from our good friends at the PLF:

Pacific Legal Foundation obtained public records from San Diego and Riverside Counties (two of the most populous counties in the state) to determine whether local governments are abiding by the new 60-day permit-approval period, which took effect in January 2020.

Unfortunately for California residents, local governments are failing miserably to abide by the new state law.

Currently, only 5% of permits issued by the county met the state’s 60-day deadline. Many times, the permitting process is held up by excessive fees or approvals needed from other departments within the county. As of July 21, 2021, there are 587 pending applications, of which 90 were submitted prior to 2020. If these permits were issued today, the median wait time would be 255 days after the application was submitted.

The government, and society in general, needs to recognize how dire the housing crisis is for the citizens.  We’re going to have continued upward pressure on home prices and rents, and building ADUs is one of the best ways to alleviate the problem. It doesn’t matter if the resistance by local governments is conscious or sub-conscious, the ADU-approval process needs to improve radically to implement the will of the people, and slow down prices.

Shiller has been too conservative on his predictions because he’s an ivory-tower guy. If he were to talk to potential home sellers, he’d find that there aren’t many – if any – who have to move so badly that they would sell for “substantially lower” prices.  The next phase after the frenzy will be the stagnant/plateau stage where the demand thins out and sellers wait for that perfect nuclear family with 2.2 kids to come along some day.

Nobel prize-winning economist Robert Shiller is worried a bubble is forming in some of the market’s hottest trades. He’s notably concerned about housing, stocks and cryptocurrencies, where he sees a “Wild West” mentality among investors.

“We have a lot of upward momentum now. So, waiting a year probably won’t bring house prices down,” Shiller said.

According to Shiller, current home price action is also reminiscent of 2003, two years before the slide began. He notes the dip happened gradually and ultimately crashed around the 2008 financial crisis. 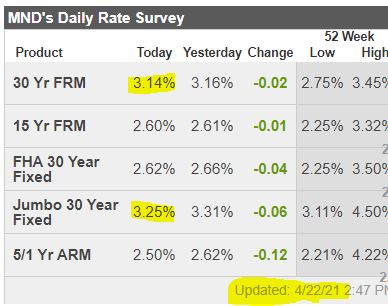 Mortgage rates have settled down nicely, and are back in the high-2s for those home buyers who don’t mind paying a half-point or so (those quoted above are with zero points paid).

I had a great conversation with a top Compass agent today discussing the market conditions.

Specifically, what do you tell buyers?

Thankfully, the market is so hot that we have more sales to rely on.  Even with the prices going up, at least there are a few recent sales nearby that help to substantiate the trend.

Is adding 1% per month to pricing enough to keep up with the actual? 1.5%?

Or how about 2.0% per month in the quality mid-range markets, both local and national? 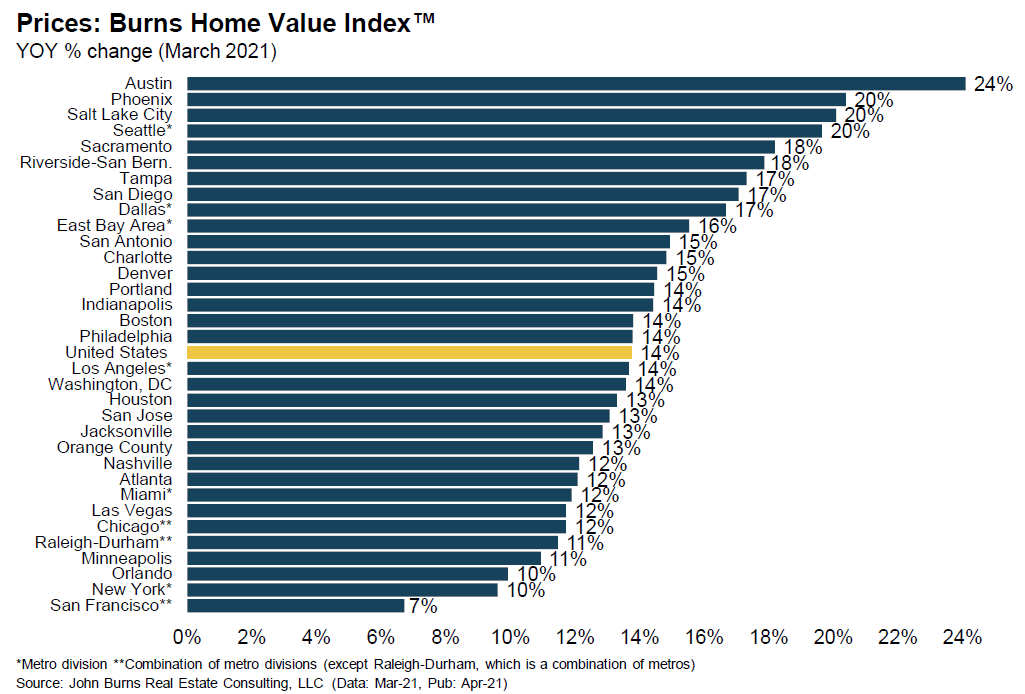 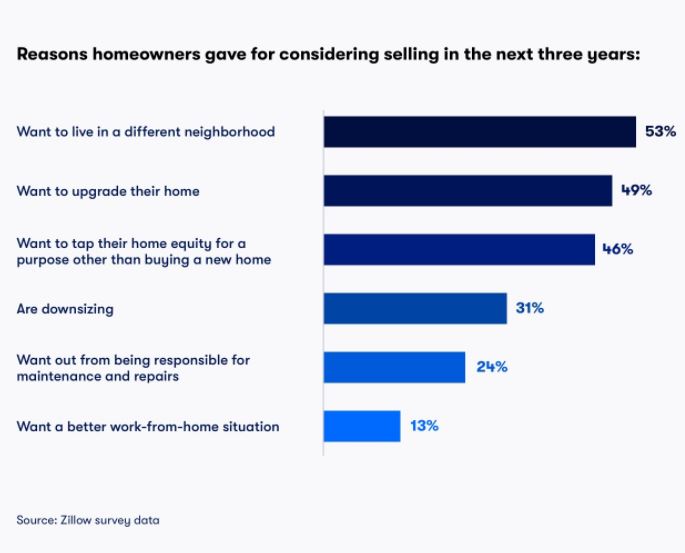 These are eye-popping numbers for all of north county – thanks Jerry Ryan! 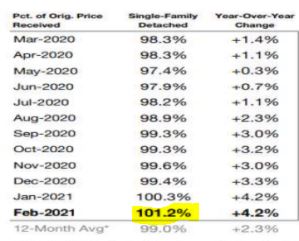 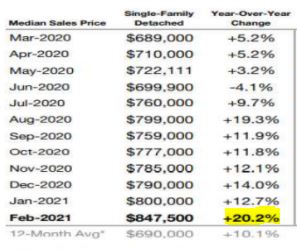 The latest month-over-month change in median SP was 6%! 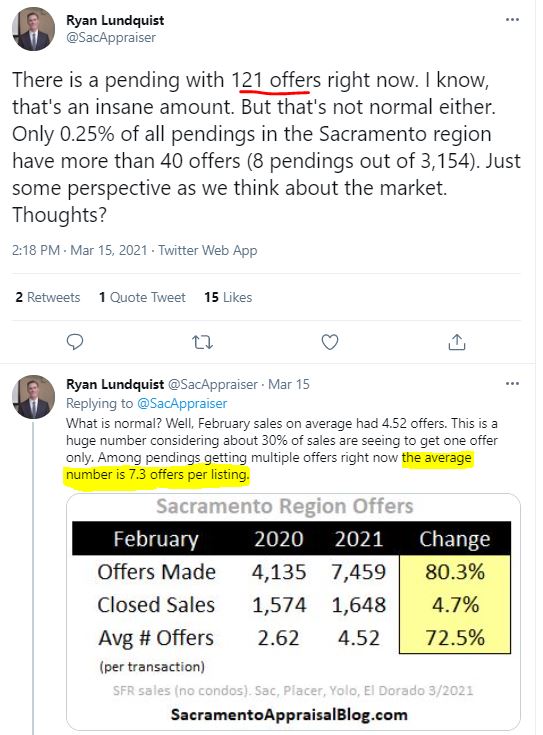