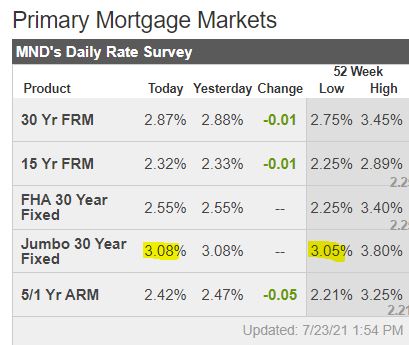 Regardless where the inventory goes (likely to retreat), the potential home buyers should stay interested, just because of rates staying low.  Many of them may be looking forward to when the foreclosures start pouring in.

What’s the latest on the delinquencies/forbearances?  From Black Knight:

The national delinquency rate is at its lowest level since the pandemic hit, even below the pre-Great Recession average.

While there’s been improvement, however, there are still 1.5 million homeowners 90 or more days past due on their mortgages but who are not in foreclosure—nearly four times pre-pandemic levels.

There are 1.5 million homeowners who are 90+ days late but who are not in foreclosure? Do you need any more evidence that lenders aren’t interested in foreclosing?  They will give loan mods when they get around to it.

It’s a great time to be a deadbeat! 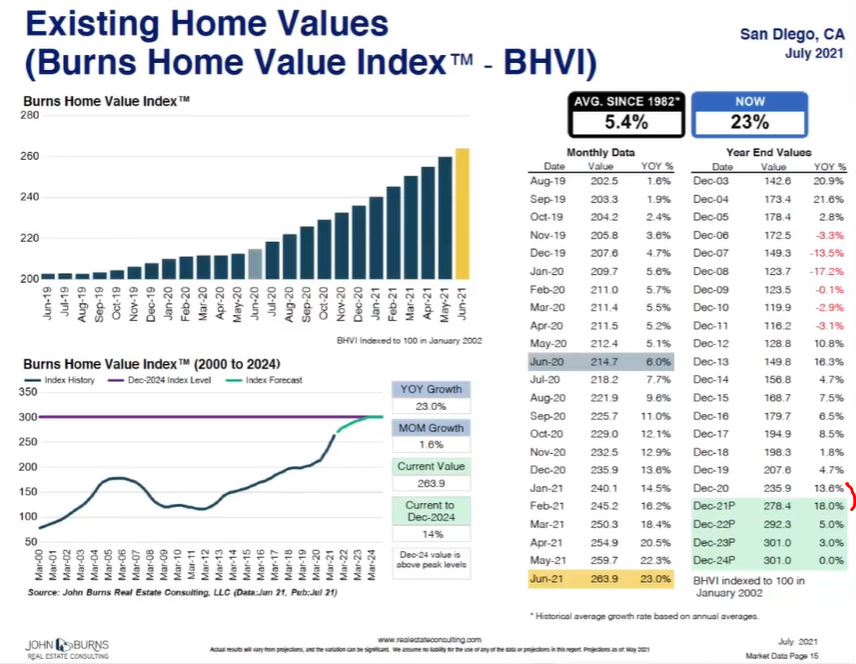 The prognostications are coming in about the direction of home prices.

It’s easy to predict that the market won’t be as hot as it’s been (or will it?).

The Burns forecast will be as good any of the guesses, and don’t be surprised if all of them end up predicting a goose egg over the next 1-3 years as we pull in Plateau City. Sellers shouldn’t mind much, because they picked up a whopping 31.6% increase during the 2020-2021 Greatest Real Estate Frenzy of All-Time.

There will be some potential sellers – probably those who don’t need to move, have plenty of time, and aren’t going to give it away – who are waiting for the market to top out.

You can’t blame them.  It’s been a hellava party over the last year, and they don’t want to leave any money on the table.  They will be the sellers who provide the extra inventory that will help moderate the pricing.

But I’m going to take the OVER.

There are two things that can cause moderation; sales and pricing.

It’s likely that one of these two things will happen:

The 31.6% increase in pricing did put a dent in the affordability, but homes were already expensive and available only to the affluent anyway.  They will still have the horsepower to pay a little more in 2022 and 2023, but they will be more picky than ever about what they are willing to buy.

I’m taking #1, and guess that sales will drop, but sellers who can find a buyer will be getting a premium.

Four new listings have hit the market in the last week:

This is a street of 50 homes, with about half of them still owned by the original purchaser from 2002-2003.  After having only three sales in the last two years, the four new listings in a week is shocking!

It’s Carmel Valley, so there probably won’t be an issue with these selling.  But it shows how quickly the market can change, and provide the buyers with even more data to consider.

See How We Are

Do we just sit there and stare? I need to play this more often! 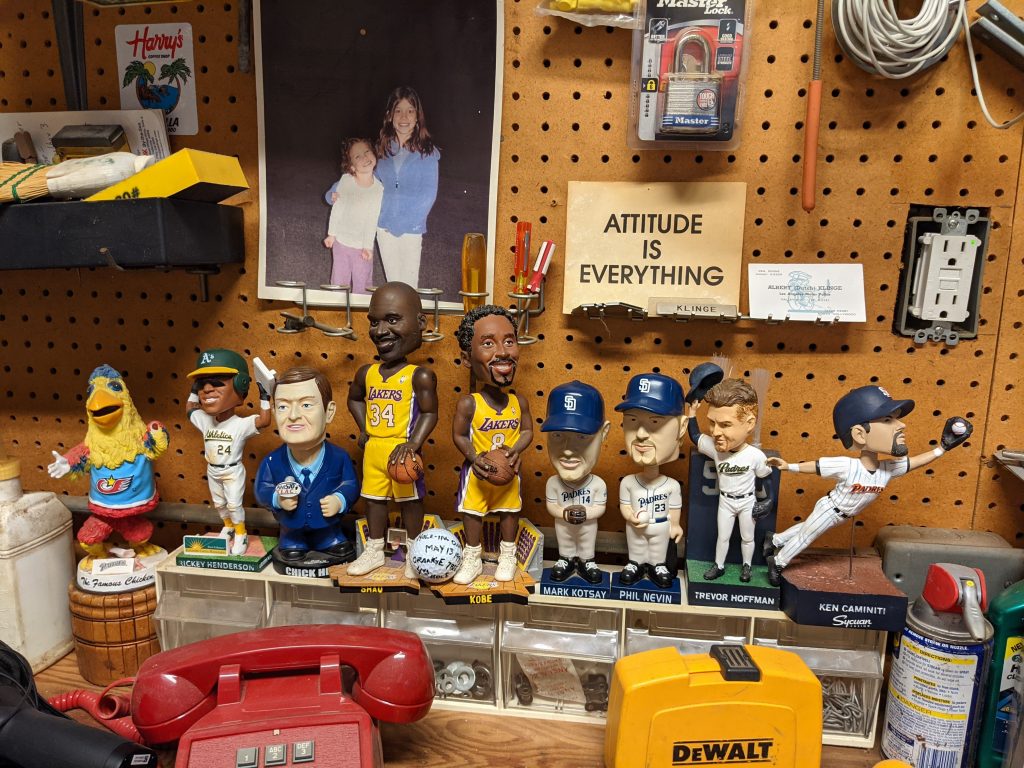 From the bottom left.

If you ever get famous enough that you might need a direct line – like a batphone – well, then you need to be prepared. A solid red push button will do just fine.

The San Diego Chicken – a legend, and sorry your left hand got clipped.

Chick, the legend. He was like a father to all of us, talking about our favorite team.

Shaq & Kobe, the duo that won three championships and could have had three more.  Between them is the golf ball I used for my only hole-in-one on a legit course in 1994.

Above is my precious two daughters in a photo I took on Esfera Drive when we lived in La Costa.  Their beauty overwhelms the wicked full moon in the background.

It’s good to have a few screwdrivers.

The Klinge name badge, and my grandfather’s business card with home address and phone number!

Mark Kotsay and Phil Nevin both went to Cal State Fullerton (as did Donna and I), and both were the NCAA College Player of the Year.  And they both had a great experience with the Padres!

Trevor Hoffman, the Hall of Famer.  His kids went to Cathedral when mine did and he participated like a regular guy.  He was an incredible baseball player too. Back in the 1990s he threw 95+ gas and blew batters way. But then he developed the wicked change-up that allows him to get 601 saves.

Ken Caminiti is a lesson to us all.

You always need WD-40, DeWalt drill bits, and an extra Master lock. Count on it!

You might see the peak reflected in the sales prices over next 30 days. This is a start – closed two days ago:

Hat tip to Rob Dawg who sent in this article that suggests Salinas ranks higher than San Diego and Ventura! I cannot find the 60 metro areas on the luxury list they talk about here so not sure about the overall rankings.

Coastal California has seen a surge of interest as buyers continue to expand out from urban hubs in Silicon Valley, San Francisco and Los Angeles.

They include Santa Maria and Santa Barbara, California, in the No. 1 spot; San Luis Obispo, Paso Robles and Arroyo Grande, California, at No. 5; and Oxnard, Thousand Oaks and Ventura, California, taking the ninth slot on the ranking, the data showed. Salinas, whose greater metro area includes the highly affluent Monterey area, also made the top 10, ranking No. 8 on the index.

These regions, all north of Los Angeles, offer space for affluent families to continue working and schooling from home without having to entirely pull up roots from California.

“In general, there’s a trend toward areas with less density,” Danielle Hale, chief economist for realtor.com, told Mansion Global. “Buyers are looking for places that are less crowded, where they can spread out and have privacy.”

The index, based on June housing data, uses a slate of indicators to assess the prosperity of emerging housing markets. Those include growth in housing supply and demand; median listing prices; unemployment; wages; a cost of living measure; small businesses; amenities and the share of foreign-born residents—who contribute to the vitality and diversity of the area. In its second edition, local real estate taxes have also been considered.

The 60 metropolitan areas reviewed within the luxury segment of the Emerging Housing Markets Index are ranked based on housing data for the top 1% of each market and the weighted sum of those metrics to determine which have the hottest high-end markets.

California has a mix of densities, from big cities to small towns, Ms. Hale continued, which gives affluent buyers options when they are looking for a new residence. That bodes well for markets in what have traditionally been second-home destinations, such as Santa Barbara’s extremely affluent Montecito and Malibu, but also attractive under-the-radar coastal locales like Oxnard.

“The top markets in the mainstream ranking tend to be not necessarily vacation-oriented spots,” Ms. Hale said of the overall, non-luxury rankings, of which Billings, Montana, came in No. 1 this time around. “That’s not true for luxury.”

The influx from more dense areas like Los Angeles is certainly evident in Santa Barbara, according to Billy Rose, co-founder and vice-chairman of The Agency.

“There are bidding wars on nearly every property,” he said. “Homes are being resold not very long after they were purchased for high premiums and agents are peddling pocket listings more than ever.” 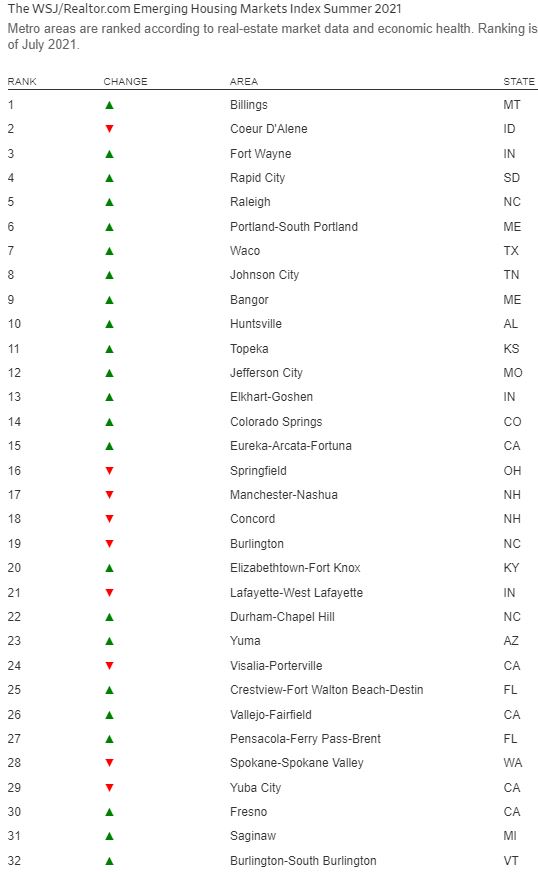 Showings in Other States 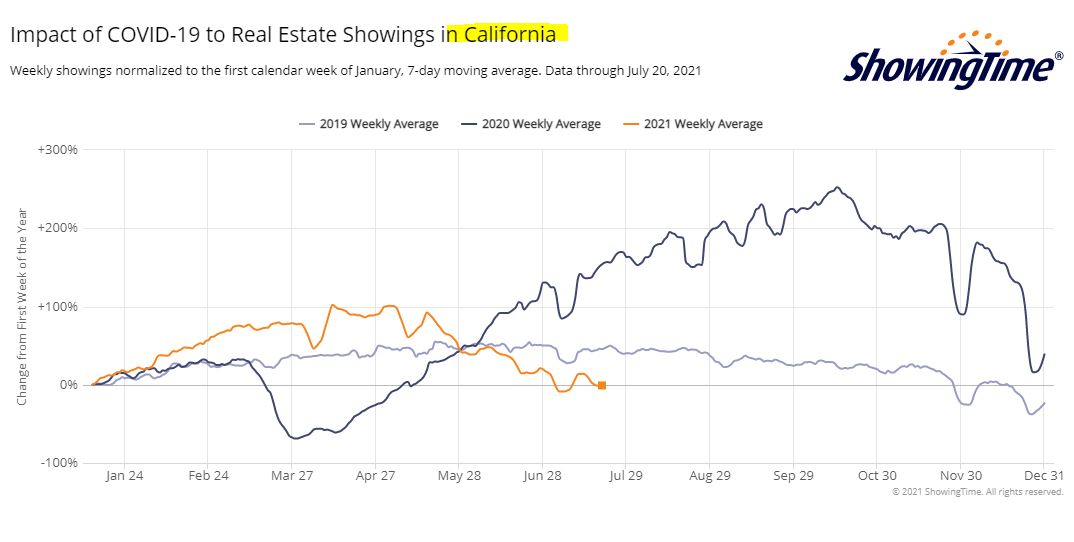 Speaking of other states, how is the cooldown playing out elsewhere?  Nevada and Texas are holding up, but towards the end of May, Arizona and Florida started to taper like we did here – and Arizona has been sliding all selling season (maybe due to lack of inventory?):

California is at the 0% line today, which is the same amount of showings as in the first week of January. Arizona and Florida are well under that!

If you are thinking about moving out-of-state, here’s another data point to consider:

This year, Uncle Sam took his cut of the past year’s earnings on May 17, slightly later than usual due to the COVID-19 pandemic. Many taxpayers are undoubtedly wondering how this year’s Tax Day will affect their finances, as a lot of people are struggling financially as a result of the pandemic.

Since the tax code is so complicated and has rules based on individual household characteristics, it’s hard for the average person to tell how they will be impacted.

One simple ratio known as the “tax burden” helps cut through the confusion. Unlike tax rates, which vary widely based on an individual’s circumstances, tax burden measures the proportion of total personal income that residents pay toward state and local taxes. And it isn’t uniform across the U.S., either.

To determine the residents with the biggest tax burdens, WalletHub compared the 50 states across the three tax types of state tax burdens — property taxes, individual income taxes and sales and excise taxes — as a share of total personal income in the state. 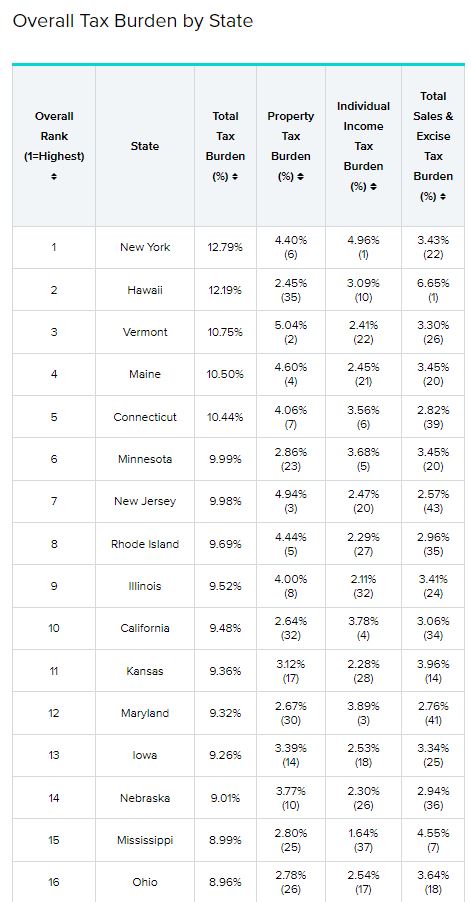 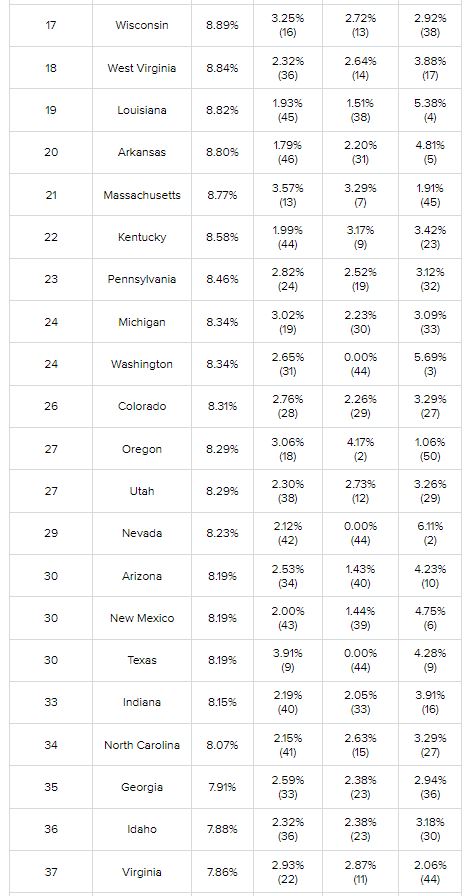 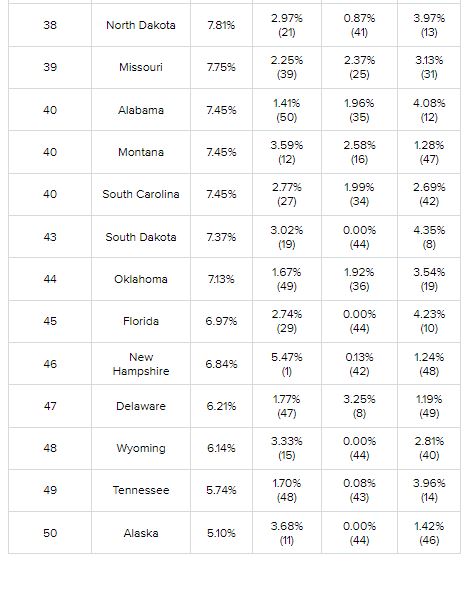