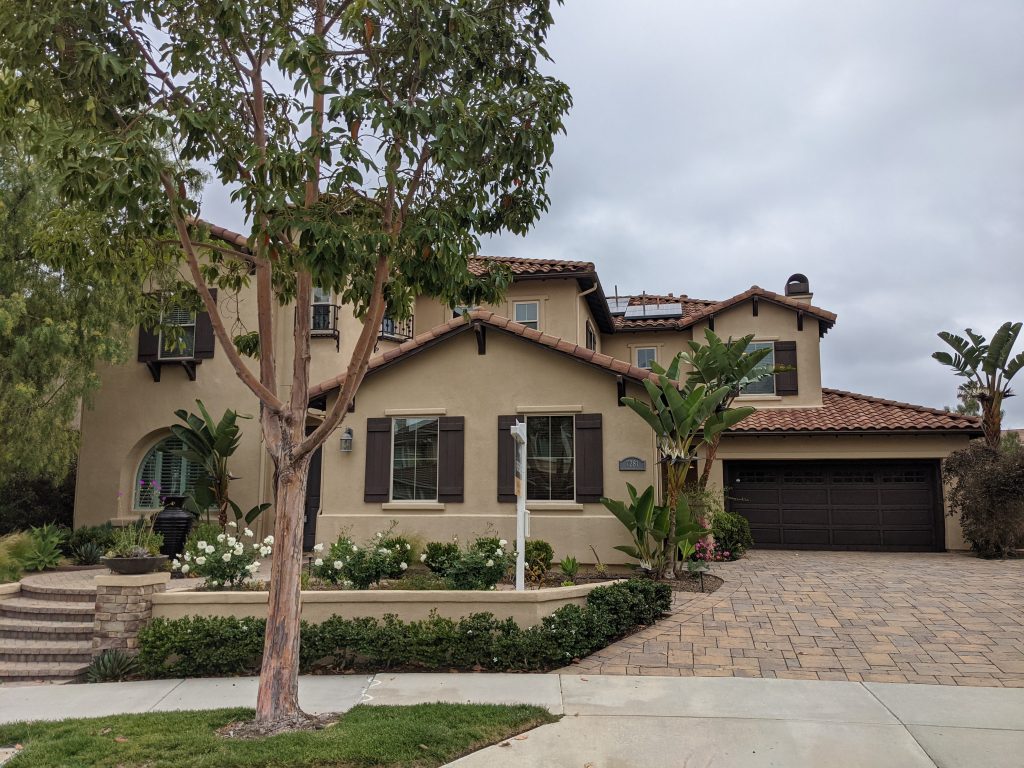 Two of the same models, on the same street, sold the same week and had a 13% variance in price – wow! 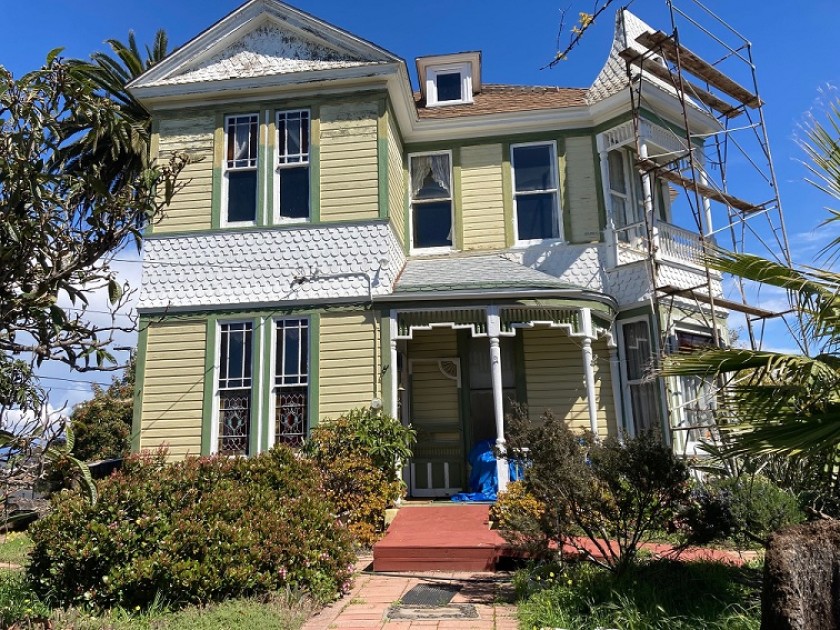 The owners of a Queen Anne architectural gem in Carlsbad have appealed to the city in hopes of saving the historic house from the wrecking ball.

“The home was built by Alonzo Jackson Culver, who also built the Twin Inns,” states a letter from Rebecca Holbert and Paul Abodeely, two of the eight family members who inherited the property.

The Twin Inns were mirror-image Queen Anne-style mansions built in the 1880s on what is today Carlsbad Boulevard. In the early 1900s, they were restaurants famous for their chicken dinners among coastal travelers.

One of the twins, known as the Wadsworth mansion, was torn down in 1950. The other most recently was occupied by the Land & Water Co. restaurant, which closed in October 2019, but the building remains part of Village Faire shopping center at the corner of Carlsbad Boulevard and Carlsbad Village Drive.

“Leftover lumber from the Twin Inns was used to build this sister home,” said Hollbert and Abodeely, whose great uncle Gerald Capp purchased the Culver House on one acre at the corner of Highland Drive and Oak Avenue in 1969.

Originally, the house was on 30 acres and had numerous outbuildings, including a blacksmith shop and a well house. It was built entirely with manual labor using pine from Julian, wooden nails, limestone, rock and sand, according to old news stories.

Capp lived in the Culver House until his recent death. He installed an electrical system, repaired the stained glass windows, plumbed the house for an indoor bathroom to replace the outhouse, and planted many of the Torrey pines, fruit trees and cacti that still grow on the property.

Also known as the Culver-Myers-Capp House, it is one of 19 properties that the City Council designated as local sites of historic interest in 1986. The artist Gertrude Myers, considered the “Grandma Moses” of Carlsbad, lived there from 1936 until her death in 1965.

In recent years without an occupant the two-story building has fallen into disrepair, which the family hopes could be resolved by new owners.

“The reality is that the house will likely need to be sold and the proceeds divided,” the letter states. “We do not want this house to be torn down and the land divided. We are writing in the hopes that the city … might be able to purchase the house and land in order to preserve it as a historic landmark and park for the enjoyment of the people of Carlsbad.”

The Carlsbad Historic Preservation Commission reviewed the family’s request at its March 8 meeting and agreed to ask the City Council to consider ways the property might be preserved.

“I’m not saying the city should buy it, necessarily,” said Commissioner Lauri Boone. “But there has to be some way to preserve this unique property and its history. There is an estate house, a carriage house and a second lot with old cars on it. There are so many creative ways this can be worked out.”

The program is an economic incentive provided by the state with oversight by the city for the restoration of qualified historic buildings by private property owners.

“This is a local historic resource … a really important piece of architecture … fast being lost,” Lafferty said. 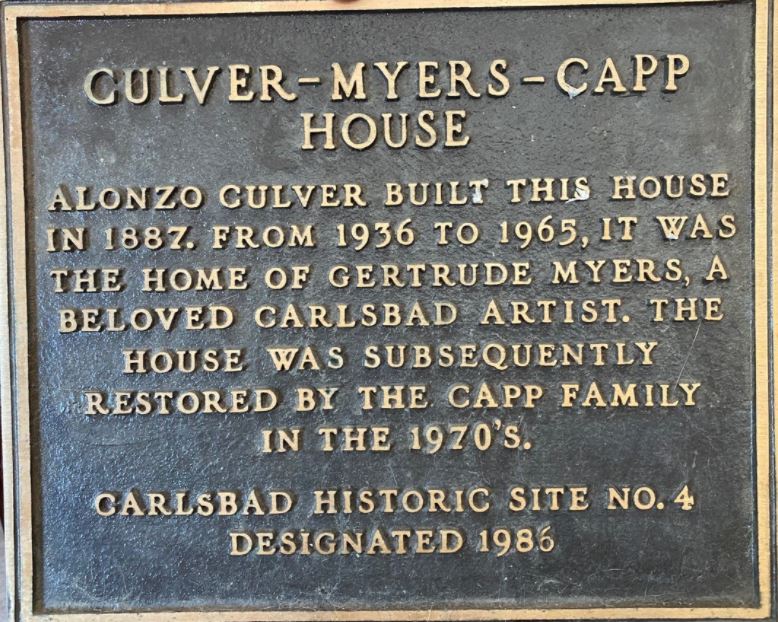 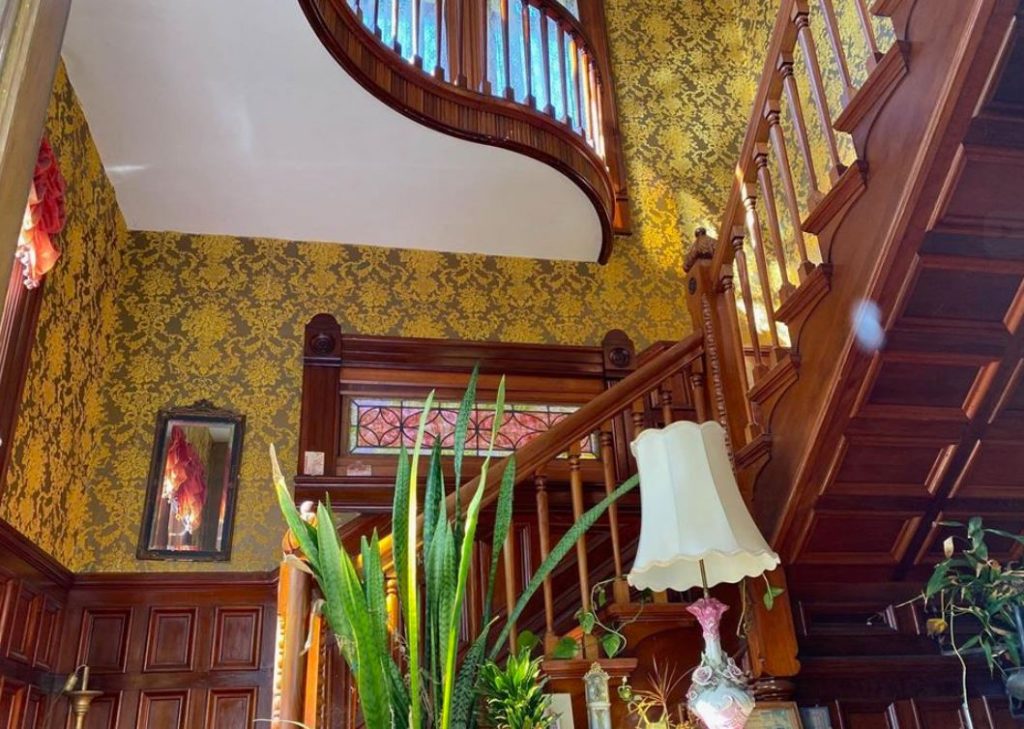 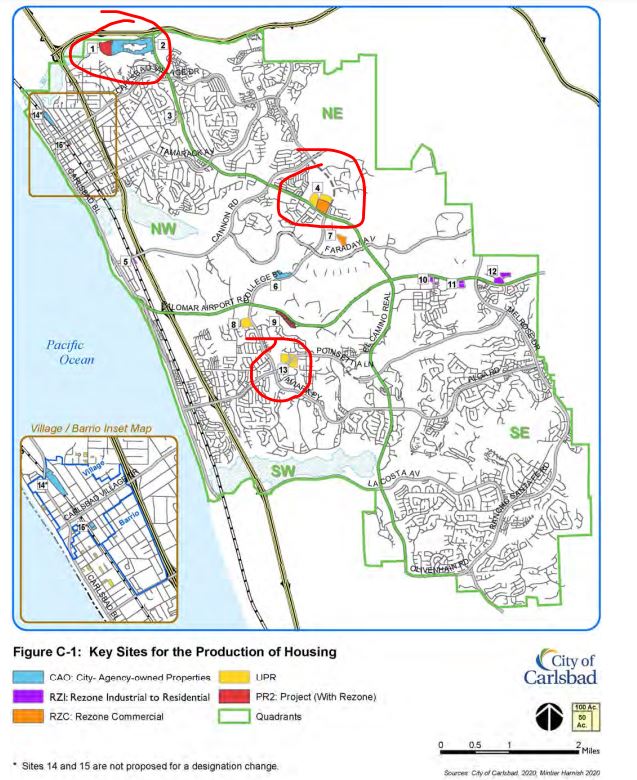 Above is the map produced by the City of Carlsbad to help identify the areas where they can increase production of multi-family units, and try to reach their low-income housing goals.

I circled in red the larger developments:

If re-zoned, these projects will include NO single-family houses. Because the city is pressed to hit their goals, it looks like most of these units will be restricted to low-to-moderate income residents.

Link to City of Carlsbad report 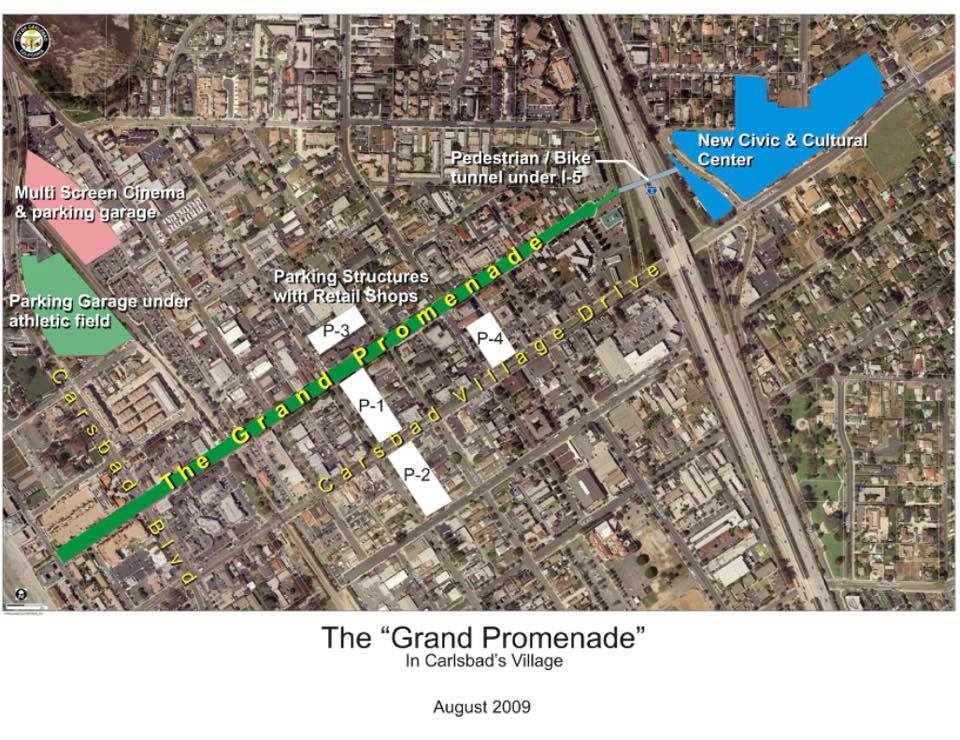 The tunnel under the freeway seems extravagant when people can use the existing Carlsbad Village Drive access. The rest of the project seems simple and relatively inexpensive if the tunnel is left out.  Let’s note that the map above is from 2009 – none of parking structures have happened yet.

The Imagine Carlsbad team will host a monthly Carlsbad Village walkabout and Q & A on Monday, April 19th at 6PM. The first walkabout will focus on the topic of the Grand Promenade and Grand Street Tunnel. Come meet Gary Nessim and Bob Wilkinson on the corner of State and Grand to review the vision and plans for a Village gathering space called the Grand Promenade and the proposed Grand Ave tunnel under the 5 freeway to Pio Pico.

The Grand Promenade was originally presented to the City Council Members in 2009 and has been incorporated into the Village and Barrio Master Plan. There will be a short walk along Grand and a Question-and-Answer opportunity following the walk. The team at Imagine Carlsbad plans to host a monthly walk to address pertinent issues including: Northwest quadrant Civic Center options, Parking, Architectural Style. Looking forward to seeing all interested citizens.

This is a good example of how prices are popping in Olde Carlsbad.

The price more than doubled in less than seven years!

The City Council has already approved this project so the public discussion is over.

But it’s interesting to note that the owner of this 7.2-acre parcel – who also owns the shopping center next door – chose to re-zone the property for apartments, instead of office space. Did they figure that rents in SE Carlsbad would keep accelerating while office rents have been stagnant, at best? Or did the developer want to supplement the attendance of his family-friendly shopping center next door? Probably both.

The trend of paying over the list price is increasing.

Most sellers and agents are happy just to get 1% to 5% over list which will cover some or all of the commission. There were 22 of 244 (9%) that went double-digit over list. The big winners:

A real bell curve there!

The most sales over list are happening right where you’d expect: 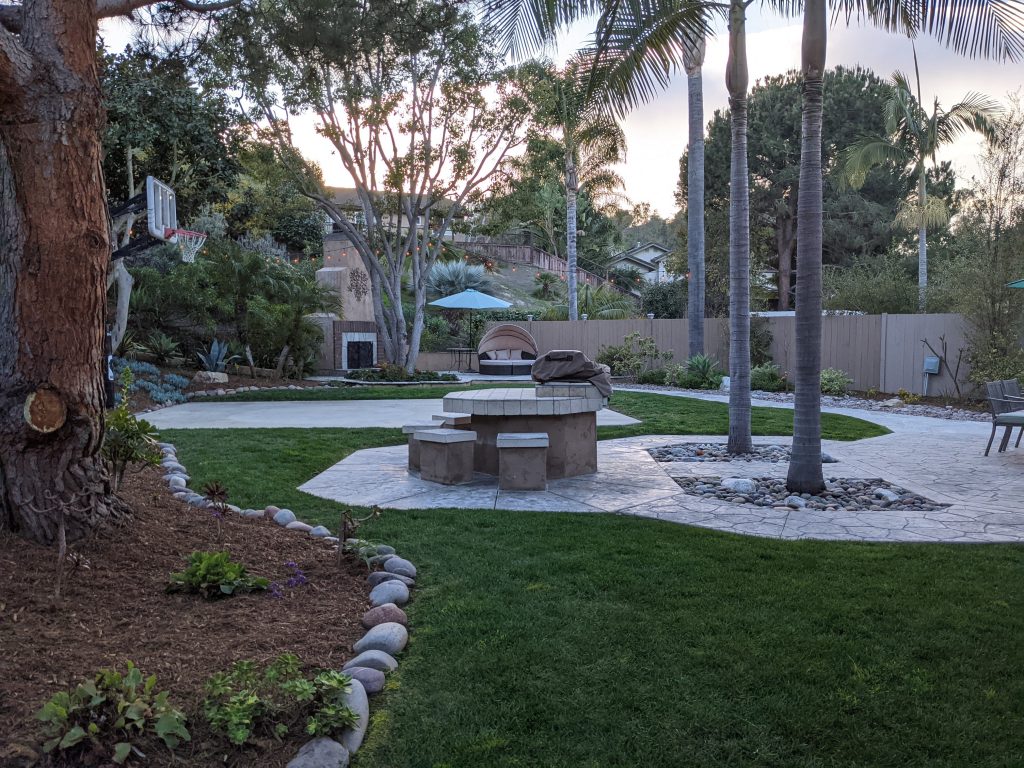 This Brentwood Heights culdesac home on a 27,007sf lot in Olde Carlsbad had one of the better granny flats – and was hotly contested.  We were hoping to talk the seller into paying off the $259/mo. solar lease, but he probably didn’t have to. It closed today for $1,625,000 cash:

If you were already thinking that this is getting ridiculous and you better grab the next cheapie even if it was a little rough around the edges before you get priced out forever….this might push you over the edge: