Will Prices Keep Going Up? 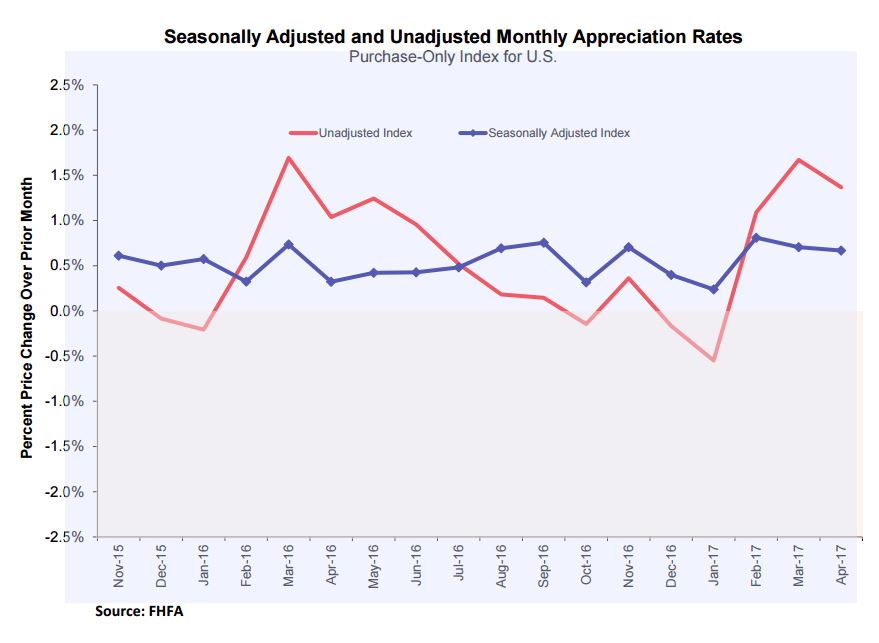 The N.A.R. Chief Economist Lawrence Yun was befuddled in his previous press release, and now this:

“Home prices keep chugging along at a pace that is not sustainable in the long run,” Yun said. “Current demand levels indicate sales should be stronger, but it’s clear some would-be buyers are having to delay or postpone their home search because low supply is leading to worsening affordability conditions.”

Yunnie is an old-fashioned guy who relies on historical norms.  But more people are probably thinking the same – this run-up in pricing isn’t sustainable.

We are in an environment where we are peppered with lottery ads daily.  People dream about getting rich quick, and selling your house is about the closest most people get – and it’s not enough just to sell your house for an all-time record price.  Instead, every seller wants more than the last guy got.

Unless that mentality changes, prices will keep going up.

Won’t there be a point where we run out of ready, willing, and able buyers?  Yes, but unless a seller NEEDS to move, they aren’t going to budge.  They aren’t going to lower their price until they are absolutely convinced that they must – and it’s more likely that sellers will withdraw their listing and try again later.

If sellers do need a solution, there are more alternatives than ever:

Once we reach the point where the market stalls, it will stagnate for years until sellers and realtors realize they must adjust their price to sell.  Realtors themselves struggle to accept the rules of supply and demand – they just keep hanging onto their listing until the market catches up.

Rising rates, economic downturns, political drama, world calamities – none will be as influential as a seller’s ego when it comes to adjusting on price.

Watch the number of sales – they are the precursor.  If/when sales start to decline, all it means is that fewer sellers are willing to adjust enough on price.

Will their reason for moving be powerful enough to not seek an alternative, and sell for what the market will bear?  It’s doubtful, and as a result, a market that is this hot will take time to re-calibrate – if it does at all.

In the article, she says that nationally we have the fewest homes for sale than at any time in the last 18 years.  But are they just selling faster, which would give the appearance of low inventory?  If we have a similar number of houses being listed and they are selling faster, I wouldn’t consider that a drought, let alone a severe drought.

First, let’s compare the total supply and number of closed sales in 2017 to previous years – these are the numbers from January 1st to March 15th:

This year’s number of new listings is 7% below the average of the last four years, but I wouldn’t call that a drought. If I watered my grass 7% less, it wouldn’t die. Besides, 40% of all listings don’t sell, so maybe the fewer listings just means fewer OPTs? The number of closed sales is much lower than previous years, but better than 2016.

How about the rest of the county?

There are 10% fewer listings this year, compared to the average of the previous four years, but sales are HIGHER than any of the last three years. There isn’t a perfect relationship between listings and sales, because some of the closed sales were listed before January 1st. But the trend looks fine.

I don’t keep a record of the number of houses that are pending, but a couple of months ago we were around 300 in NSDCC (between La Jolla and Carlsbad).

The reason we have a record-low number of homes for sale is because they are selling so fast.  Severe drought isn’t the right adjective – can we call it scorching hot?  Half of the pendings found a buyer in 15 days!

With half of the upcoming closed sales finding their buyer that fast, it means they probably paid the seller’s price, or close.  The other half are sellers who are willing to wait until they get their price!  It means the pricing trend should continue upward.

I think we’re back in the frenzy zone!

How long can the hot market continue? It’s up to the sellers.  If they are willing to sell for what the market will bear, we’ll keep rolling because there are lots of people who want to buy a house – it’s just a matter of price.

If the auction format gets more popular, it would solve everything.

The price surge has locked many first time buyers out of the market. But it has been a boon to owners, many of whom regained equity after being underwater on their mortgages following the Great Recession crash.

The gains have been seen across Southern California, though inland areas remain further behind. In October, the median price — the point where half of homes sold for more and half for less — rose in all six counties compared to a year earlier, CoreLogic said.

The sustained price gains have real estate agents, buyers and sellers wondering how long the hot market can continue.

Most economists say price increases should be smaller next year as families struggle to make larger offers on homes. Wage growth simply isn’t keeping up with the rising cost of housing, they say.

Bubble or No Bubble?

This article is talking about Oakland, California, but these conditions exist up and down the coast.  Thornberg has been one of the more level-headed bubble analysts:

“This is not a bubble,” says Chris Thornberg, an economist in Los Angeles.

Though he’s just one guy, we called him because he has the dubious distinction of having predicted the 2008 market crash. His colleagues used to call him “Dr. Doom.”

He says that the money flooding the Bay Area isn’t built on speculation like the last boom.

“These are people with real money, with real incomes,” he says. “They have enough money to live in whatever cities and neighborhoods they want, so if there’s not enough high-end housing, they’ll just gentrify lower-income neighborhoods.”

And while the growth may slow, it won’t stop, Thornberg predicts. He believes the solution is a matter of adding to the housing supply. As more units come on the market, prices become more reasonable for everybody, he says.

But others argue that without policies making sure some of the housing is affordable, it’s not going to make any difference for middle-class and poor people.

“That’s completely wrong,” Thornberg says. “The evidence tends to suggest that for the most part, when you start layering rule after rule after rule on real estate developers, ultimately you end up simply hurting the supply worse.”

So what should Eaton do?

Thornberg’s answer? Buy now. Anything you can get.

The intensity of the frenzy is determined by inventory – which grew this week, signaling some slow down in the market:

You can feel it on the street, but a slight slow down only means fewer offers in the bidding wars. We would need a few weeks of reversal before the momentum takes a hit.

Now that it appears the market has bottomed, we’ll see claims of how much better we’re doing.  Take them with a grain of salt, because results may vary!

In the low-to-mid-range areas, you can probably tack on another 5%-10% since the fourth quarter of 2012 as well:

We are going to hear the word “bubble” applied to the real estate environment for years – and maybe forever.

At this link is CNBC’s Downer Diana cracking on the market, and on the other side, this developer expresses why he thinks we’re not in bubble danger:

While the whole NSDCC market feels like it is cooking, the inventory shortage and resulting dash to tie up properties is restricted to the lower end of each area.

We’ve considered a 2:1 ratio of active listings to pendings to be a fairly normal market, and the higher-end of local markets are in that range – or worse.  But the lower-ends have been scorching hot:

It supports the notion that there isn’t much move-up buying, at least not up into our higher-end regions. Most sellers fall into three categories: those leaving the county, estates that are liquidating, and the exhausted over-encumbered folks. It is similar in the ultra-high end markets too:

The contingents make up about 25% of the Pend+Cont totals, and would make those categories appear slightly bloated, but the short-sales are more likely to close now than ever – because buyers are willing to hang around longer.

Want to purchase a house around North SD County’s coastal region for less than $1,000,000? You can expect a very challenging competition for the good buys. Want to spend more than $2,000,000? You’re in the driver’s seat!

The overall SD County market looks hot with 52% of new listings finding a buyer within 2-4 weeks, but how about the tonier North SD County coastal region?  The year-to-date numbers look similar to the county’s stats we saw in the last post, rather ho-hum:

Sales are up 19% year-over-year, but average pricing and days-on-market aren’t over-heating.

Indeed, it is a bit calmer around NSDCC:

Only a third (34%) of new listings have found a buyer in NSDCC, compared to just over half (52%) throughout the county.

People hang onto the notion that it takes longer to sell the more-expensive homes, and while that is a statistical fact, we shouldn’t just accept it as normal when everything else has changed.

But how many NSDCC sellers price their home to sell quickly?

There are other reasons to price ’em to sell – the hassle of keeping the house immaculate, the inconvenience of showings 7 days a week – many with short notice, and the desire to move on.  But here are the NSDCC detached-home stats on how close sellers got to their list price this year, compared to how long they were on the market:

The Sales Price-to-List Price ratio is figured from the current LP at time the listing was marked active – it doesn’t include any price reductions in the interim. If you have been on the market 60+ days, you probably had to lower the price to re-ignite urgency because after 14 days, the showings dry up.  The 95% above is probably more like 90% of the original list price, and maybe lower.

Buyers use the days-on-market stat like a club, and want to penalize sellers for not pricing accurately. They will pay all the money in the first week or two, but after that it is a slippery slope. It is more efficient for sellers to price accurately from the beginning.

Sellers will find out how hungry buyers are for new meat – there is a rush of showings during the first 1-2 weeks, then they stop on a dime, and reducing the price is the only fix.

I don’t mind taking them a little high to test the market, as long as we adjust as needed.  My closed non-REO listings this year have averaged 50 DOM, and 97% SP/LP, and removing a short sale and two paid-off homes, they improve to 14 DOM and 99% SP/LP.

While it seems like the local market has been cooking this year, when you look at the basic stats it’s hard to be impressed.  Here are SD County detached-home sales for Jan 1 to Oct 14th:

Sales are up 15% this year, but the avg. cost-per-sf and days-on-market are similar – ho-hum, right?

The reason it feels so hot is because of the speed in which the attractively-priced new listings are finding a buyer.  There isn’t a way to research previous time periods, but this looks spectacular compared to the 72 DOM average:

More than half (52%) of those new listings have already found a buyer!  It shows how efficient the market is when more than half of the sellers can get the price right in the first 2-4 weeks.