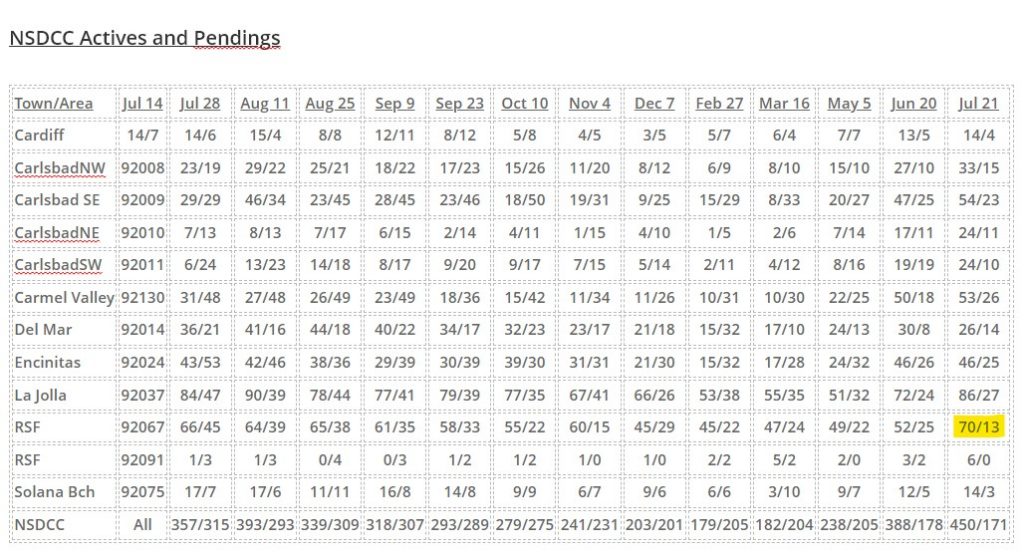 In the recent years prior to the pandemic, the actives/pendings in Rancho Santa Fe ran at a 10:1 pace.  Nobody is in a hurry there, they don’t have to sell, and they’re not going to give it away.  Those days appear to be coming back.

The median list price of those RSF actives is $5,995,000 – is anyone going to feel sorry for them? Probably not. Does it reflect what is going on in the rest of the area? Not really – the other areas are mostly around a 2:1 ratio (except La Jolla) which has been our standard for a healthy market and pretty good, all considered. 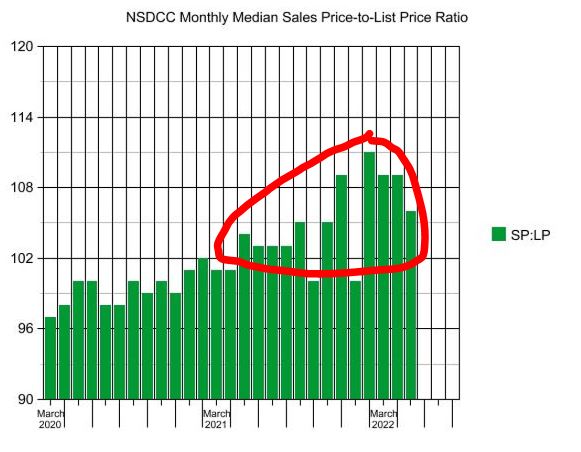 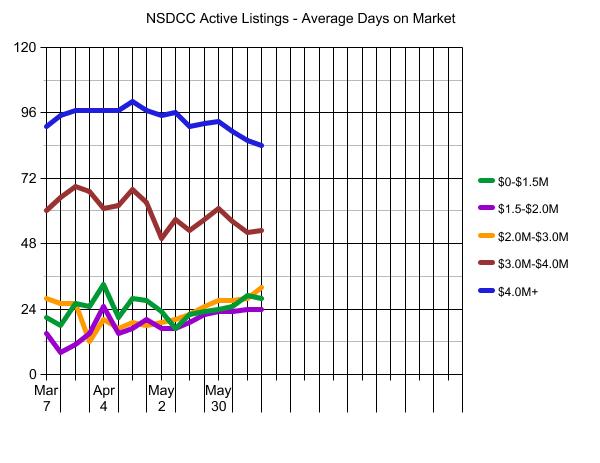 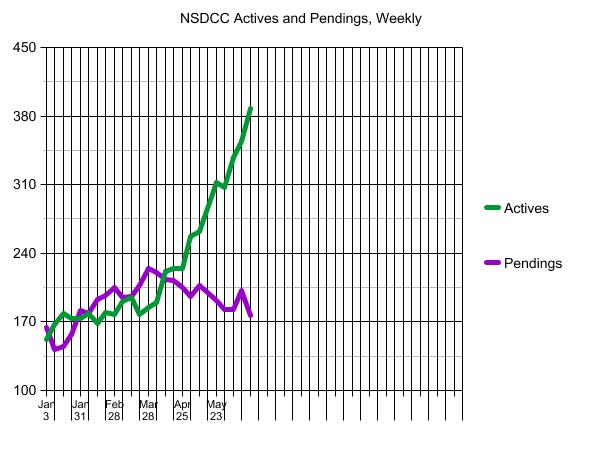 Buyers thought this was a holiday weekend, and sellers didn’t!

It was the week that the actives-to-pendings ratio between La Jolla and Carlsbad crossed back over the ideal 2:1 range, which is what we have observed to be the sign of a healthy market in the past.

The high-end firmly believes that it takes longer to sell the uber-expensive homes, so they are happy to wait for their magic moment – and typically have the resources to do so.

I wrote offers for buyers around the $2,000,000 range, and both listing agents claimed to have multiple offers.  It may take longer to reach an accepted offer these days as listing agents wait for better deals to arrive, so let’s check back on the pendings in a couple of days.

This is what Plateau City looks like – plenty of unsolds preferring to sit, than reduce. 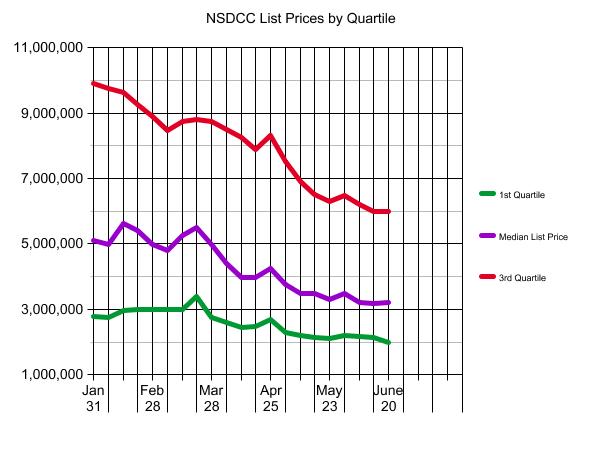 Even though real estate is local, the homebuyer psychology tends to be similar across the country – mostly because people are people, and have similar reactions to every variable.  When they see mortgage rates go from 3% to 5.5% in less than six months, it’s only natural to want to pause and see where this goes.

But the desperation among buyers – especially those who are out-of-towners and don’t own a home here yet – hasn’t changed, due to the low inventory.  It is unsettling to see so few of the quality homes coming to market, and they want/need to stay in the game so they don’t miss out.  It would take a flood of new listings to change that, which isn’t happening. At least not yet.

Let’s have the statistics help guide us on current market conditions.

1. We have considered the local real estate market to be ‘healthy’ when the active listings to pendings has been 2:1 ratio. Here are the detached-home listings between Carlsbad and La Jolla:

The current ratio is very healthy, and the actives aren’t exploding.  Last year at this time there were 330 active listings, so only having 262 homes for sale in an area with a population of 300,000+ people isn’t bad. The only startling part is that there aren’t more homes for sale!

2. Let’s talk absorption rate, another measuring stick for the health of the market.  The historic norm for a healthy market has been a 6-months’ supply of homes for sale.  In recent years, a 3-month supply has seemed to be more realistic, just because the supply has been limited.

What is it today?

4. Have the number of actives and pendings been consistent in 2022? 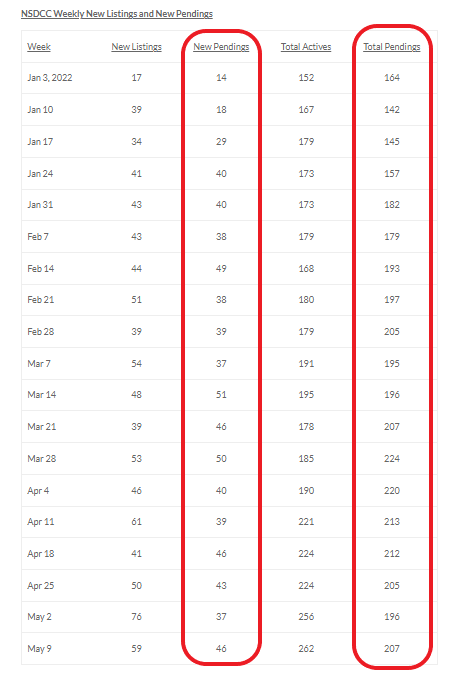 So while there is talk about a shift in the market, it may just be a pause. Statistically, the market looks steady – there isn’t a surge of unsold homes, and there are still plenty going into escrow every week.

If there aren’t as many buyers looking, and there aren’t crazy numbers of offers, then it’s just going back to a more-normal market. Not normal yet, but heading that way.

The list prices have been on a rampage, and it’s probably time for them to stop going up so much every month. It was going to happen sooner or later, and that day has probably arrived – finally!

Can’t Buy What’s Not For Sale

The talking heads are saying that higher rates are slowing sales, and I say it’s the lack of inventory.

If higher rates were the cause, we would see more active listings piling up.

This chart shows how the pendings have dropped off from last year – especially those in yellow:

The active-listing counts aren’t any higher – there are just fewer listings overall.

Let’s see which areas are picking up steam early in the selling season:

We used to think that a normal and healthy market has a ratio of 2:1 actives to pendings, so it’s stunning to see five areas that have 3x the number of pendings as actives! And SE Carlsbad has more than 4x!

The trend of the average days-on-market can give us a feel for the market direction too: 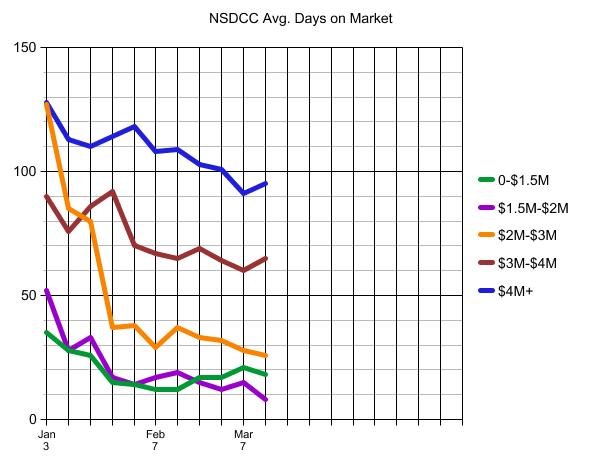 Last year, the high pending count was 386 on May 12th – and this year’s peak will likely be in May too.

It looks like I made an error on the Del Mar A/P counts in the last reading.

It’s the end of February, yet we’re not close to having the same market as last February.

Heck, we’re fighting to get back to December’s numbers:

Did you ever think we’d be hoping to just get back to having the same market as in 2021?

Tom asked on our Facebook page about getting the actives and pendings data for San Diego County.  Here is the InfoSparks data from the SDAR Resources page on the MLS – they are interactive so scroll over the graph lines for the exact counts:

My initial reactions to each graph:

New Listings: Hard to grasp the cumulative effect so I calculated annual number of listings. In 2021 we have had 16% fewer listings than in 2018.

Pending Sales: This November’s count was almost identical to last year – which was the all-time high!

Sold Listings: The total number of sales for the year is 9% ahead of last year, and we’re not done yet!

It’s interesting to see that the total number of actives and pendings are so similar – as close as they were in late-June as the max frenzy was unwinding. The big split in the counts on August 11th made it look like the frenzy was coming apart, but they’ve gotten back in line nicely since: 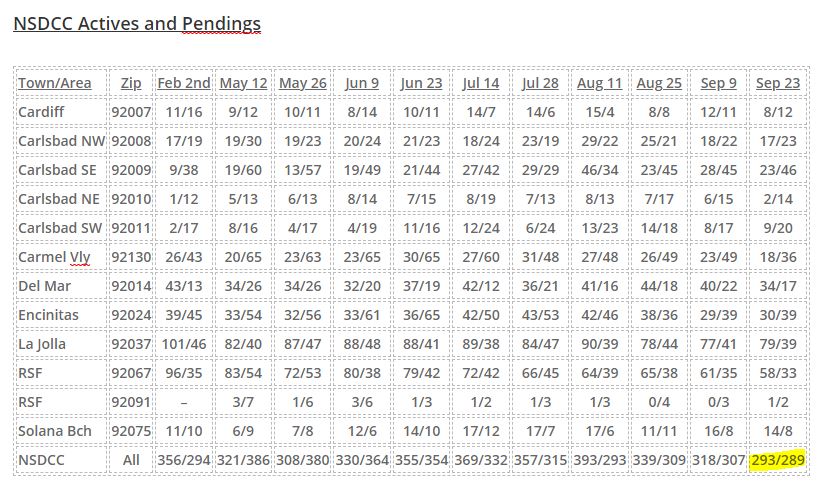 But with fewer homes for sale combined with the time of year, we probably won’t see much change.  Let’s call it low-grade frenzy conditions for now.

The average days on market is creeping upward, but still no big concerns. There will always be sellers who would rather wait for the lucky sale, than adjust their price – and longer average market times indicate more sellers doing the former. Though we should note that the hottest range ($1.5 – $2.0) must have a lot of dogs lying around: 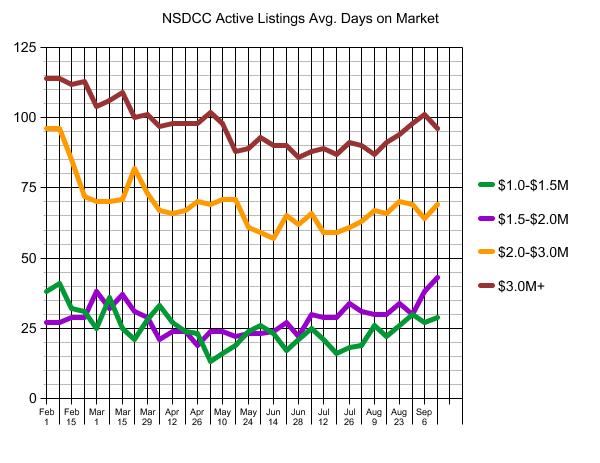 San Diego County has experienced the worst YoY change of active listings IN THE NATION. Three thousand houses for sale in a county of 3.3 million people? Yikes!! 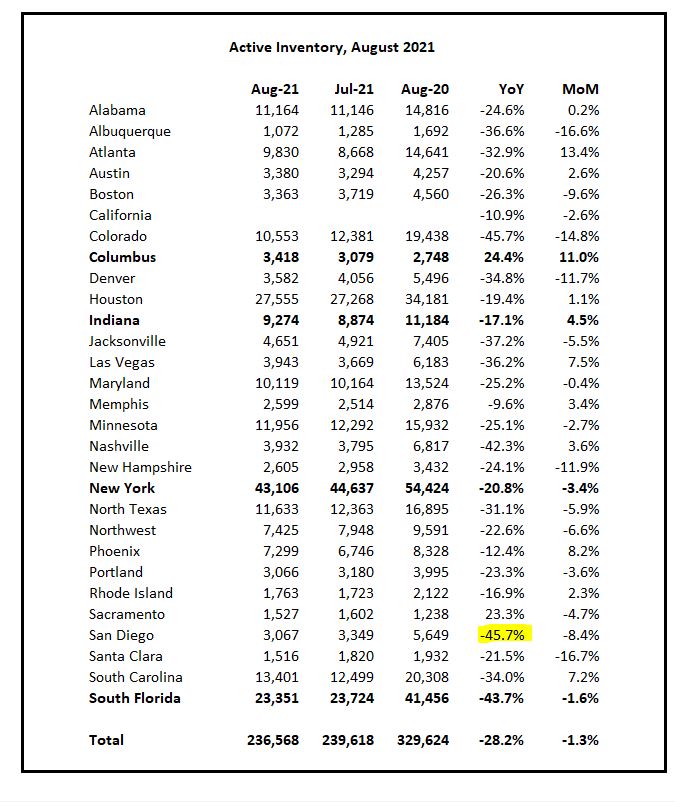 And that was the August report.  Today in San Diego County:

Our Big Three – Carmel Valley, Encinitas, and SE Carlsbad – continue to carry substantially more pendings than active listings, but both La Jolla and Rancho Santa Fe have similar pending counts, which is incredible given their much-higher price points: 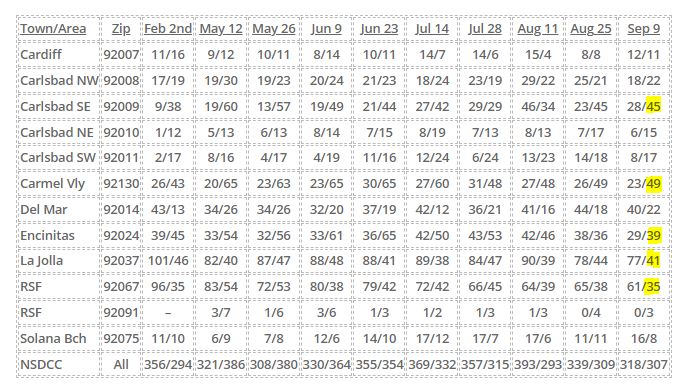 The average days on market is creeping upward, but still no big concerns. There will always be sellers who would rather wait for the lucky sale, than adjust their price – and longer average market times indicate more sellers doing the former: 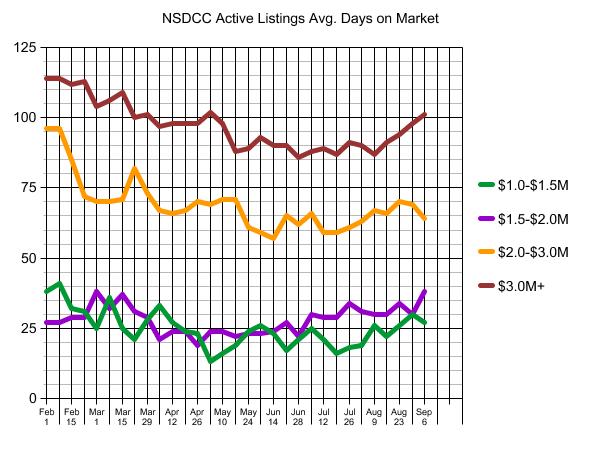 New post (Just Sold in Olivenhain) has been published on http://bubbleinfo.com - https://www.bubbleinfo.com/2022/09/28/just-sold-in-olivenhain/

New post (Hurricane is One More Deterrent) has been published on http://bubbleinfo.com - https://www.bubbleinfo.com/2022/09/28/hurricane-is-one-more-deterrent/