The pandemic is still raging, the President of the United States is in the hospital, the election is right around the corner, and so are the holidays. The frenzy has to slow down at some point, doesn’t it?

So I schedule for 11am, and show up to find today’s list of showings taped to the front door: 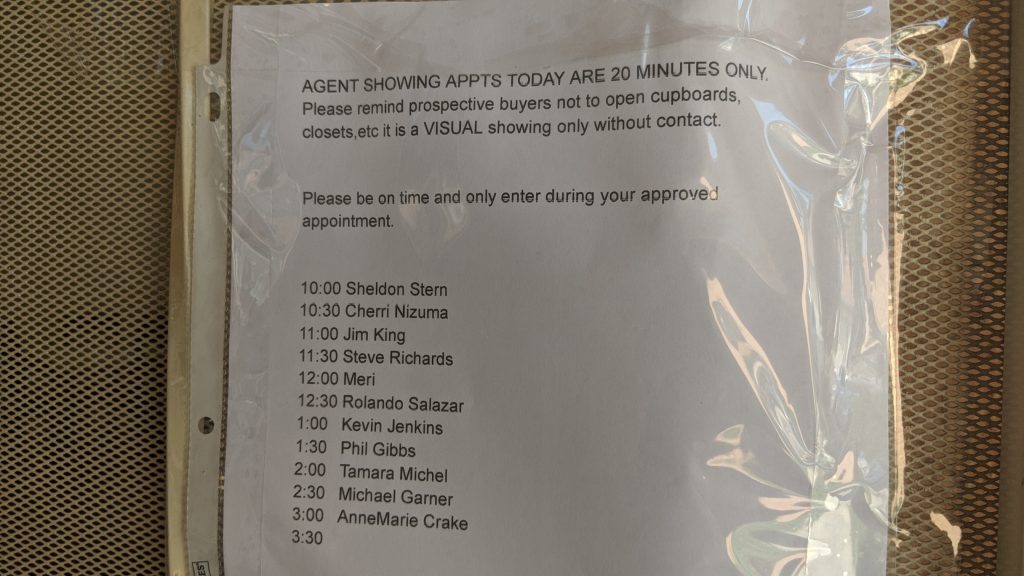 The listing agent happens to be there, so we discuss the current market conditions. She is a long-time independent broker like myself (who now also works @ Compass) and we agree that the environment is ripe to convert to single agency naturally, and buyer-agents being eliminated.

It’s not because it’s what best for everyone involved, because clearly it’s not good for buyers and sellers – except maybe for those sellers who live in the house being barraged by showings the first few days on the market. It doesn’t sound like much of a price to pay, but for homebodies, or those with little kids & pets, it can be a major inconvenience.

Zillow is the only entity who spends eight or nine figures per year on advertising, so they will control our destiny – and with them setting up brokerage units manned by employee-agents in all 50 states, you can get a feel for what’s ahead.

In the meantime, consider these developments.

Today’s listing agents are making it harder to show and sell their listings, they are lowering the buyer-agent commissions (and taking the difference), and some realtors are advertising guaranteed cash offers as the better way to sell your house.

As is the case throughout America, the truth doesn’t matter nearly as much as how loud you can scream.

The greed displayed by these listing agents feeds upon itself, because other agents witness these practices happening without any reprimands, and they start to believe it’s acceptable…..and then they do the same thing. The game is evolving into how to beat the buyer-agents out of their commission.

In the short-term, realtors can justify this revolution by pointing to the commercial brokers who have practiced their real estate like this all along. Heck, less competition will slow down the rapid price increases we are experiencing, and help to trim the over-population of realtors everywhere too….so you can say there are good things about it.

But it all plays into the hands of Zillow, and eventually they will be who processes your order.

I’m not in the real estate industry so maybe I’m missing something but does the fact that the ppsf is the same as ’05-’07 mean we are in a mini bubble?? Everything seems too expensive right now?  thoughts?

If it were a bubble, it would need to be “pop-able”.

The last bubble (and to some degree the late-1980s bubble) popped due to exotic financing.  We saw homeowners fleeing in mass numbers around Oceanside and other parts where subprime loans were prevalent.

The rising appreciation that we enjoyed from 1995 to 2007 became embedded – most thought it would last forever.  When it didn’t, those in more affluent areas bailed out over the thought of being ‘underwater’.

Those folks may be having some regrets today.

Today’s mortgages are the most conservatively underwritten financing we’ve had over the last 30 years.  Buyers are using sizable down payments in most cases, and their payments must be affordable to get a loan.

These are folks who plan to stay forever, regardless what happens to prices.

If prices were to drop, they won’t be selling – they live there.

How do we know?

Because they would be more tempted to move if prices went UP – and look how few sellers we have now.  Nobody wants to move at today’s prices, if they were lower they really wouldn’t move!

How can we support these prices when the SD median household income is $70,000?  Have lots of renters – the homeownership rate is 55% in the county.

It is a market for the affluent, and the thought of everyone enjoying the benefits of the American Dream is kaput.

Could a Baby Boomer Liquidation Sale disrupt the market with a flood of inventory?  I doubt it – not in prime coastal regions where the kids would rather move in, than give it away.  The houses are paid off – what would you rather have? Free housing or free money?  The government will provide enough money for food, but you are going to be on your own for housing.

Yet, today’s valuations aren’t as crazy as they seem – here is Rich Toscano’s latest comments and graph:

(T)he peak was over 8 years ago — nearly a decade now! — and since that time, both rents and per capita income in San Diego are up 20%.  “Peak pricing” in nominal terms just isn’t a meaningful number, when the purchasing power of money has been declining while nominal incomes and rents have been rising over that period.

The folks at www.1worldonline.com like to poll their audience, and last month they used a bubbleinfo.com blog post in one of their surveys.  Their readers voted on this question:

Chris says 55% of respondents believed another crash was going to come, with more Republicans strongly believing in a crash.

Those who voted for another crash may have been influenced by the opposing blog post to mine, which talked about the millenials facing a weak job market, and shrunken workforce in general.

This was his summary paragraph:

With investors fleeing the real estate market because of higher interest rates, with fewer people working and those that are working are earning and saving less, who is going to be able to buy houses in sufficient volumes to keep the real estate “recovery” going? It doesn’t matter how low interest rates are if people don’t have the incomes, savings or credit to buy homes. Rising interest rates can only make a bad situation worse.

Even if it’s not as bad as he says, we keep hearing how ‘demand has been pulled forward’.  If so, it’s a good question – who will be the future buyers?

The future buyers will be the first-timers and others who want to finance their purchase, especially with a lower down payment, who have been shut out by the big-money investors and cash buyers in general.  This future-buyer pool will likely have a limit on their resources, so the appreciation trend will probably moderate, and prices will fluctuate from area to area.

But with a county population of 3.14 million people, we don’t need everyone in the pool – we only sold 3,466 homes in the county last month.  You could exclude 90% of the population from the market and we’d still have enough demand…at least until the baby-boomer liquidation sale starts around 2020.

These guys aren’t as famous as Case-Shiller yet, but they employ a similar tracking of same-house repeat sales around the country (they have 45 million observations on file!).

Here are the changes in their HPI year-over-year for the San Diego County single-family detached properties – as a county, it looks like we gave back most of what was gained since early 2009:

More from C-L on the delinquent mortgages – can we work our way out of this?

We are hitting the peak months of resets/recasts, yet delinquencies are dropping?

The banks/servicers must be working feverishly to reset/recast the expected $1.6 trillion in ARMs, or just not reporting lates?  When this is all done, will anyone be surprised that a whole lot of people got a whole lot of free rent?

Thanks to SM for sending this in – click on image for clarity:

Heading For the 5s?

Earl had this listed in the high-$600,000s, but after almost five months and no sale, the bank re-assigned it to another agent, and lowered the price.

Will having only 3 bedrooms, no yard, lots of stairs and backing to the street force the price down further?  Is this an example of how the general buyer malaise has more affect on the inferior properties?

Tuesday news from Standard & Poor’s/Case-Shiller index found the average price of a single-family home reached a new low in the first quarter and is now at 2002 levels.

However, mortgage data tracker and industry service provider CoreLogic found Wednesday the average national price for a home increased a marginal 0.7% from March to April. It is the first increase since the expiration of the homebuyer tax credit in mid-2010, CoreLogic notes. Last month, the home price index from CoreLogic posted a decline of nearly 6%.

Even more notable is the top states that saw home price appreciation are outstripped by the massive declines seen in the top five declining markets.

Bank of America plans to shrink its $850bn portfolio of troubled home loans by about half over the next three years as it seeks to quicken the pace with which it resolves problems related to the housing crisis and its disastrous purchase of Countrywide Financial.

Terry Laughlin, who is spearheading BofA’s mortgage modification and foreclosure programs, told the Financial Times he had been given leeway to act quickly to tackle the growing number of bad loans that threaten to overwhelm the bank’s overall performance and tarnish the reputation of Brian Moynihan, its chief executive.

This year BofA hived off its problem loans into a “legacy” unit that Mr Laughlin runs, leaving the “good” mortgages in a separate division headed by Barbara Desoer.

A key part of Mr Laughlin’s strategy will be to shrink the portfolio of “bad” loans to about $450bn-$500bn during the next few years, as mortgages that originated with Countrywide and are no longer offered by BofA – including some with adjustable interest rates – are run off, modified or sold at discount prices.

BofA owns about $118bn of the problem loans outright. It services the rest, which means it collects payments from borrowers and initiates foreclosure proceedings.

About 60 per cent of the 4.2m borrowers were up to date with their payments. The rest were at least three months past due, Mr Laughlin said.

To better handle the high number of delinquencies, Mr Laughlin wants to streamline the modification process, under which borrowers are typically offered lower monthly payments for a period.

Mortgage holders will deal with a single bank employee and should receive a decision within 30 days, about one-third of the time it now takes to determine eligibility.

It’s all over the news – the housing double dip is here.

They say that the DD is caused by an overload of foreclosures dragging down prices – but they are talking about the overall national market.

Are the recent trustee sales building a backlog of REOs around San Diego?

It looks like more of the same around here – just when the servicers get some momentum, they turn off the spigot. There have only been 14 successful trustee sales in NSDCC over the last two weeks, so we’re back to the 1+ foreclosure per day.

The threat of future foreclosures is always lingering – could the worst be yet to come?  With the banks and servicers controlling the flow, there doesn’t seem to be much reason to expect a flood coming anytime soon – or ever.

How many REOs are floating around in the shadows?

In the depressed areas where REOs are abundant, there’s no surprise to see some can-kicking, but around North County Coastal it’s been quiet. A few of the shadows have just been foreclosed, so you know there is some lag for evictions, repairs, and processing.  Others are involved in litigation too, so it doesn’t appear that they are purposely delaying the process much around North SD County Coastal.

The buyers around NSDCC will welcome the 25 well-priced SFR REOs when they hit the open market over the next couple of months – expect bidding wars!