I was going through some old photos last night!

Back in the day, Mike Anthony and I bought a duplex in the College Area.  The lady in the back house had been there for 20+ years, and was a serious smoker.  We don’t think she ever opened a window – the nicotine on the walls was thick enough that we could scrape it off with a knife.

After we scrubbed it down, my brother Dave and his friend came over to paint with a rented spray rig – and it took three coats to cover it.

He and I had a dispute over him spilling some paint on the hardwood floors, and ended up in a fist fight in the backyard!

The last photo is of my all-time favorite, the triple-black 1979 Cadillac Seville.

Buying decisions that caused closings in early 2015 were stimulated by mortgage rates in the mid-to-high threes. Now that rates are back over 4%, and NSDCC inventory is about 18% higher than it was at the end of April, we should see the appreciation rate flatten out for the rest of the year.

Here are the San Diego monthly changes for 2015:

“Home prices continue to rise across the country, but the pace is not accelerating,” David M. Blitzer, managing director and chairman of the Index Committee at S&P Dow Jones Indices, said in a statement.

A fluff piece attempting to reveal something interesting, but they just want you to know that traffic at realtor.com has been growing since NewsCorp started advertising it:

Summer is officially here, and just like the heat waves sweeping through much of the country, the real estate market shows no sign of cooling off any time soon, according to a preliminary analysis of June data for realtor.com®.

“Our early read of real estate trends in June suggests good news ahead for the U.S. residential real estate market, especially in the hottest markets with healthy growth in supply,” said our chief economist, Jonathan Smoke, who conducted the analysis.

Based on data for the first three weeks of June, the median list price increased to $233,000, up 7% year over year and 2% over May. Median days on market is still at 66 days, down 7% year over year and flat month over month. Helping create more opportunities for buyers, the listings inventory is now growing faster, at 4% over May but still down over last year.

More and more Americans are spending time searching for the perfect home, our data show. On realtor.com, traffic and searches continue to set new highs in June, Smoke said. Unique users for the month are now on pace for at least 40% growth year over year, he found, while visits and searches are expected to be up more than 50% and 30%, respectively.

Did The Staging Work? 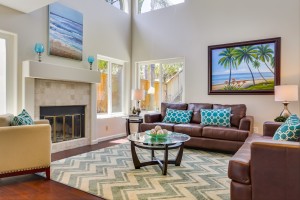 More notes on staging and its effect on sales.

Staging delivers a great first impression – it’s probably worth it for that.  But staging is just a component of the overall package needed to sell a house – especially for top dollar.

Examples from the weekend:

1. An agent called me on Saturday morning to tell me her client was gushing over the home on Via Mariposa, and they were going to make an offer.  But nothing happened, so I pinged her on Sunday morning.  She got back to me on Sunday night, and said her client re-considered, and decided not to make an offer.  In her case, the staging wasn’t enough.

2.  A lady asked me at open house, “I wonder what this house looks like without the staging?”  Some buyers want to see beyond the staging.

3.  Kayla said, “I’m not a big fan of the blue/teal color combination”.  The staging will have a different impact on different people.

4.  An example where staging really paid off was with the out-of-town buyers. There were multiple out-of-towners viewing homes via FaceTime, Skype, and video – the staging has to have a positive impact when you are looking at a small screen from afar. The eventual winner at Via Mariposa was one of them – a family member saw it in person, and online photos and video did the rest.

I am comfortable with buyers making informed decisions based on video/FaceTime actions.  People trust the smartphones for everything else in life, might as well use it to buy a house!

Staging got the ball rolling, and got buyers engaged.  But the rest of the house had to look sharp, and the price had to be attractive too.  There were about 20 showings of that house over the first four days on the market, and we had three written offers.  For seventeen buyers, the staging wasn’t enough.

After offers are submitted, the end result doesn’t just happen by itself. I’ll take the credit for giving every buyer a fair opportunity to step up and pay top dollar for the home, and guide it over list price.  It’s the talking to people that makes the sale!

END_OF_DOCUMENT_TOKEN_TO_BE_REPLACED

Shiller discussing who should buy a house – those who have stable employment!

Robert Shiller, an economist at Yale, won a Nobel Prize in 2013 for his analysis of asset prices, and his name is half of the much-watched Case-Shiller Index of housing prices. It turns out, he’s not too enthusiastic about home ownership, either as a lifestyle choice or an investment. Buying a house is “like a consumption choice, it’s not really an investment,” he tells Money magazine’s Susie Poppick in the video below.

No shortage of demand for the brand new high-enders.  Here they’ve sold 100+ houses and lots already, averaging $2,000,000 or so for the houses.

If you are on the lengthy list of waiting buyers (who had to pre-qual to $2M), is time running out?  Do you opt for one of the two 1-story plans with 25-ft backyards available, or hold out for a future phase and risk getting nothing?

I heard an interesting comment the other day on broker caravan.

The listing agent said, “Maybe we’re all undervalued?”, as he sat on his $6,000,000 listing with nobody else in attendance.

If you judge it by the weather, he could have a point.  If we have the best weather in the U.S.A., then we should have the highest-priced real estate.

It probably means that rich folks from around the world who are retiring will be giving strong consideration to the San Diego area.  Retirees are going to be drawn to where the grandkids live first, and if the ‘kids are in the general Southern California vicinity, then San Diego might be considered for retirement.

Either that is happening, and/or our employment base is stronger than ever.

Two days ago, we saw that the NSDCC sales this year between January 1st and June 15th were 7% higher than last year.

NSDCC is the coastal area between La Jolla and Carlsbad that has a population of around 300,000 people.  Carlsbad makes up about a third of the population and sales in the area, and realtors and buyers alike consider it a quality lower-priced alternative to the affluent Encinitas-La Jolla stretch.

Here is the breakdown of those January 1st-June 15th sales:

The number of sales in Carlsbad corresponded with a similar increase in listings.  But look at the higher end market – the year-over-year sales were 8% higher, in spite of 2% fewer listings!  The median price increased nicely too.

This is an affluent area, and real estate is booming – could it be undervalued?

Our second installment in the staging series:

Bravo’s reality show “Million Dollar Listing San Francisco” debuts July 8, but I already have an idea for a spinoff — “Million Dollar Over Listing.” It would feature homes in the Bay Area that sold for at least $1 million more than the list price.

There were at least 10 such sales in San Francisco over the past year, 14 in Santa Clara County and five in San Mateo County, according to Multiple Listing Service data. They ranged from teardowns to mansions.

Patrick Carlisle, chief market analyst with Paragon Real Estate Group, chalks it up to the “general insanity of the overheated market,” which stems mainly from demand outstripping a long period of below-average inventory. In addition, “many agents have adopted a strategy of egregious underpricing,” he said.

In San Francisco especially, underpricing is so prevalent that most buyers search for homes well below their target price, knowing the sale price will be much higher.

“If you price (a home) where it should be, it will sit,” said Realtor Alan Canas.

Canas represented the sellers of a home at 44 Everson St. in San Francisco’s Glen Park neighborhood. The four-bedroom, four-bathroom home was somewhat dated but had magnificent views, which were hard to value.

What if he had listed it closer to his expected price? “If we had priced it at $2.2 million, I honestly don’t think it would have seen the play (it got) at $1.8 million,” Canas said. “It’s psychological, almost a game.”

The top two offers were both all cash, which is good because if the buyer had needed a loan, “I don’t think it would ever appraise at $2.8 million,” he said.