While this looks like an attractive price on paper, the buyer pool will thin out once they see the floor plan, and the amount of work needed:

Wouldn’t it make sense for banks to be unloading REOs when all we see are bidding wars everywhere?

Initially we thought that the drop-off in foreclosures was because banks were pushing people to short sale instead. With this being the last year of debt-tax exemptions, wouldn’t we be seeing a surge of new short-sale listings?

Nope, instead it appears that they have shut down the foreclosure machine:

Defaulting homeowners are going to squat as long as possible because they really don’t want to move – besides, rents are high and their credit is shot.

For short sales to occur, banks have to threaten to foreclose in order to keep the pressure on, otherwise defaulters will just keeping living for free.

But both short-sales and REO listings have plummeted.

Pollyanna thinks that people are making their payments again, or that the foreclosure settlement caused enough loan-mods that the problems are solved. No way. Filings are down, and cancellations are up because that has become policy now.

CARLSBAD — Caruso Affiliated, a Los Angeles-based commercial developer known for The Grove in LA and The Americana at Brand  in Glendale, is developing plans for a 48-acre project it is buying from SDG&E.

The California Public Utilities Commission notified the public of the sale, which is contingent upon its approval and other regulatory steps.

The land, currently in agricultural use,  is east of Interstate 5 and north of Cannon Road. A larger parcel of land adjacent to Agua Hediona Lagoon is also available to Caruso for purchase, but the city general plan calls for it to remain as open space, officials said.

The property is currently zoned for public utility use and would have to be rezoned as tourist-commercial in compliance with the city general plan. SDG&E’s overhead electrical lines and underground natural gas lines would remain in place.

The sales price has not yet been disclosed but would become public when escrow closes, officials said.

One other detail in the project involves the future of the strawberry and other vegetable crops farmed by Carlsbad Strawberry Co. Caruso said last year that it intends to preserve that use along Cannon Road as part of its final plan.

In comments issued in September, Carlsbad Mayor Matt Hall welcomed Caruso and said he will “remain supportive as they prepare their plans for this premiere location.”

Caruso, founded 20 years ago and headed by Rick Caruso, specializes in neighborhood and regional retail centers. But it also included housing at the Americana project and Burton Place next to Beverly Center in LA. Whether the Carlsbad project would include has yet to be decided, Middlebrook said.

The company’s website lists six other projects and two others in the works. Carlsbad’s is not yet listed.

The San Diego-based band ‘Transfer’ is preparing for their next tour of Europe, which begins on March 10th in Belfast: LINK to Website

Here’s an example of what happens when three houses hit the market about the same time in Rancho Penasquitos, and the flurry of activity that ensued:

Not That Impressive Statistically

Except for the elevated sales and reduced market time, these stats appear fairly range-bound.

It is the low inventory and practically-free money that is driving the frenzy. If anything changes with either, the frenzy would slow.

A lack of available land is seen changing all forms of commercial development in San Diego County, according to experts at a recent real estate meeting.

“The Otay Ranch projects are the last of a breed of masterplanned communities,” said Gary London, president of London Group Realty Advisors and one of the speakers at a London Group meeting at the Hilton Garden Inn in the Carmel Valley area. “The only way we’re going to be able to accommodate the people coming (mostly births over deaths) is to build up rather than out.”

Alan Nevin, a London Group principal, said even at Otay Ranch “no new large lot releases will happen prior to 2015.”

“Where there is land, in the East County, for example, the predominant owner is the federal government,” added Larry Clemens, who developed the Aviara property in Carlsbad.

Clemens said long processing times also continue to be an issue. He said when the Academy of Our Lady of Peace school wanted to build science buildings and a parking garage, it took eight years to get entitled.

“The new NIMBY [not in my backyard] doesn’t want any development,” Clemens said.

London said that with large land tracts out of play, brown fields which have significant toxics problems, and old shopping centers that have seen better days must get a second look for new projects.

“Millennials [people born between 1980 and 2000] are going to continue to demand apartments,” London said. “Most of us aren’t going to be building single-family, and the price of housing is going to be significantly bid up.”

“Two thirds of all housing units have no one living in them who is under 18, and only one in seven households consist of a mom and dad and two kids,” he said, adding that 25 percent of the people living in this county live alone. “The ‘Leave it to Beaver’ years are over.”

Moving his attention to the office market, London noted while Class A vacancies have moved into the single digits in some submarkets, the Class B and C spaces are a different story.

“Of the 120 million square feet of office space in this county, 80 million of it is in B and C space that has higher vacancies,” London said. “I don’t think we’re going to need to build any more office space.”

London said with file cabinets having disappeared and less square footage needed, the demand for office space will lessen.

London did say that The Irvine Co. may elect to develop a long-shelved, roughly 700,000 square-foot office tower at West Broadway and Pacific Highway near downtown San Diego’s bayfront. But if constructed, it would snatch its tenants from existing buildings.

Robert Rauch, who developed the Hilton Garden Inn, said the county has about 58,000 hotel rooms, but will see about 600 added this year.

Rauch said occupancies, even at their worst, still averaged about 60 percent, before returning to the 70-plus percent ranges within the past year.

Rauch said he’s concerned that if some sort of a deal isn’t worked about between Congress and the White House over sequestration, business and recreational travelers could shut down their spending.

For now, he seemed cautiously optimistic.  “I think we are probably in the fourth or fifth inning of the recovery,” Rauch said.

Bill Speer, another London Group principal who specializes in retail, said that sector has rebounded much quicker than most would have expected.

Speer said about 50 million square feet of retail space in about 60 major projects is currently under construction in the United States.

Closer to home, Speer said all the ongoing redevelopment and expansion activity at the several of the seven Westfield malls here are a testament to retail’s resilience.

The view deal on Muirlands already closed, after a 7-day escrow:

They had 36 offers. Select your listing agent carefully!

While a 9.2% increase in home prices would have been shocking a year ago, we have come to expect it today.

The month-over-month increase was 1.07%, which should be about what we see for the rest of 2013.  If the Case-Shiller Index didn’t exclude flips owned less than six months, the number would be even higher. 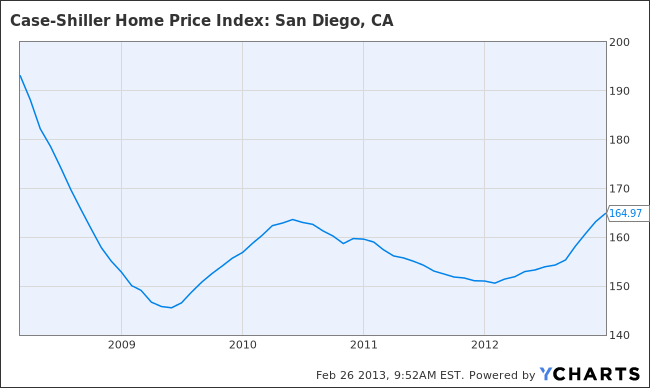 Carmel Valley and Carlsbad are the best two areas for sampling the general market conditions.  They are both known for their tract homes, which offer the convenience of newer features and lower maintenance/repairs.

They also tend to be relatively affordable, compared to custom homes.

But to show you how today’s market has gone ballistic, here is a summary of tract homes available in the various areas: