One Block to Balboa Park! 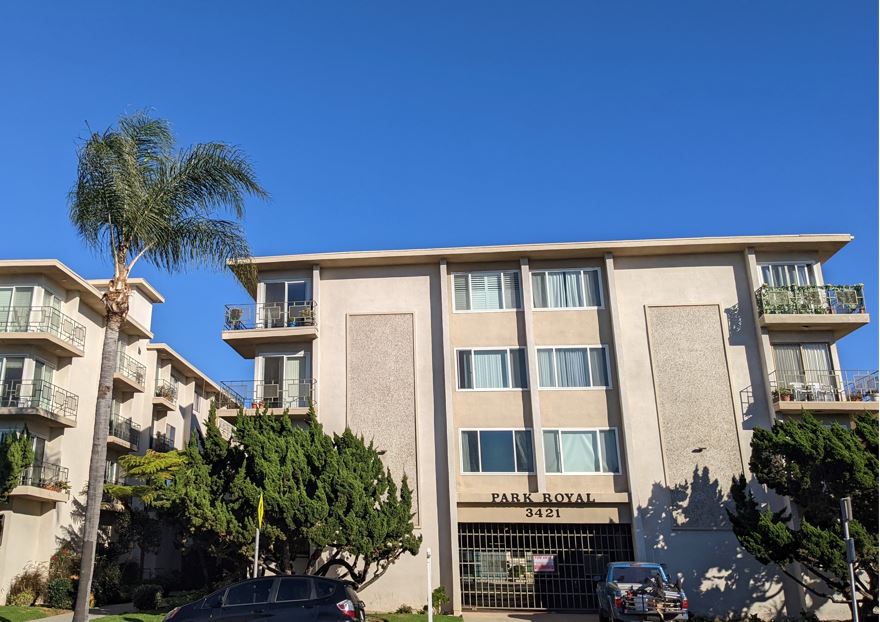 Check out our new listing of this 2br/2ba home in Park Royal! It’s the premium penthouse unit in the complex, located in the very back and has the wrap-around balcony for max viewing of the surrounding area. Newer kitchen, newer bathrooms, hardwood floors, efficient mini-splits, and plenty of natural light. Want move-in ready? This is it – just bring your toothbrush! Two pets allowed too! Balboa Park is a treasure – live right next to it! Morley Field is a block away, which has cycling, dog park, swimming, tennis, golf (27 holes) archery, softball, frisbee golf….everything you need to enjoy the outdoors! Only $695,000. 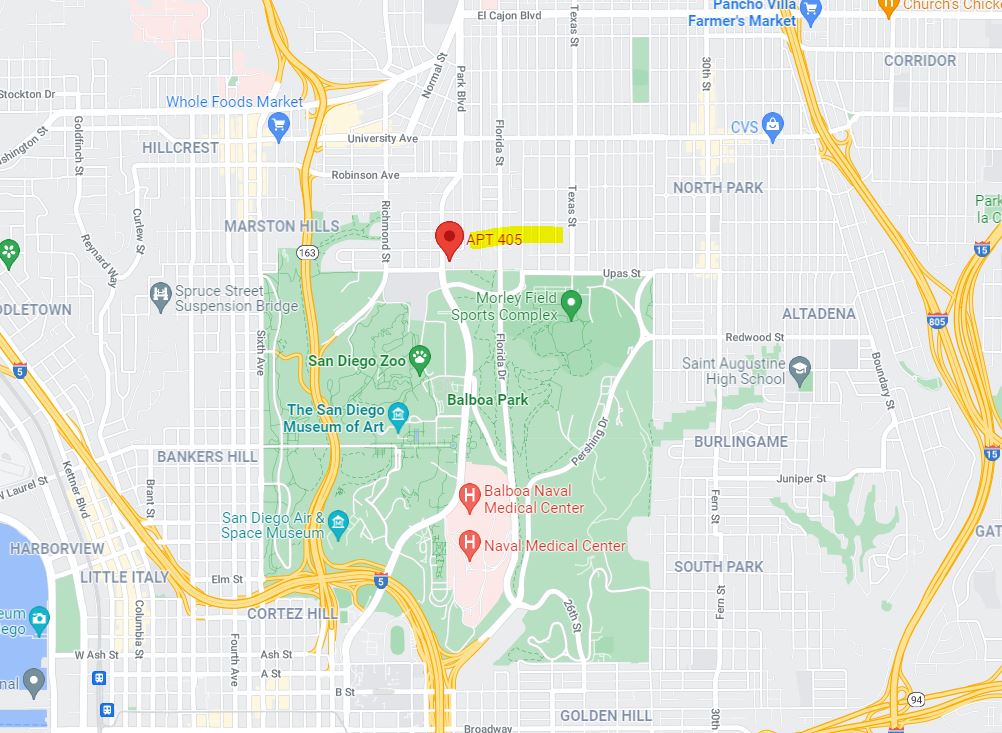 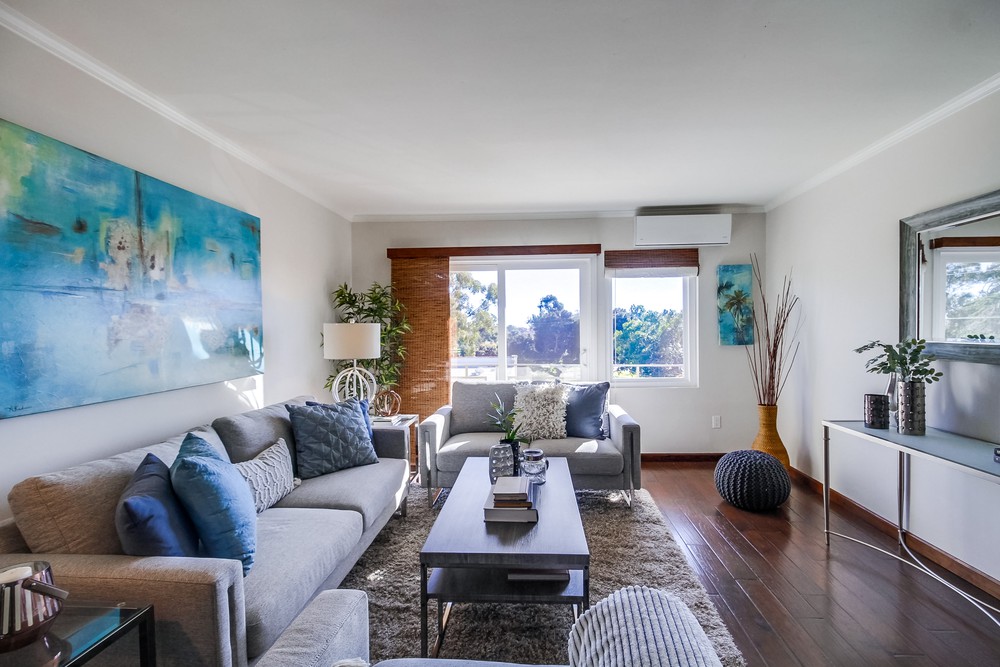 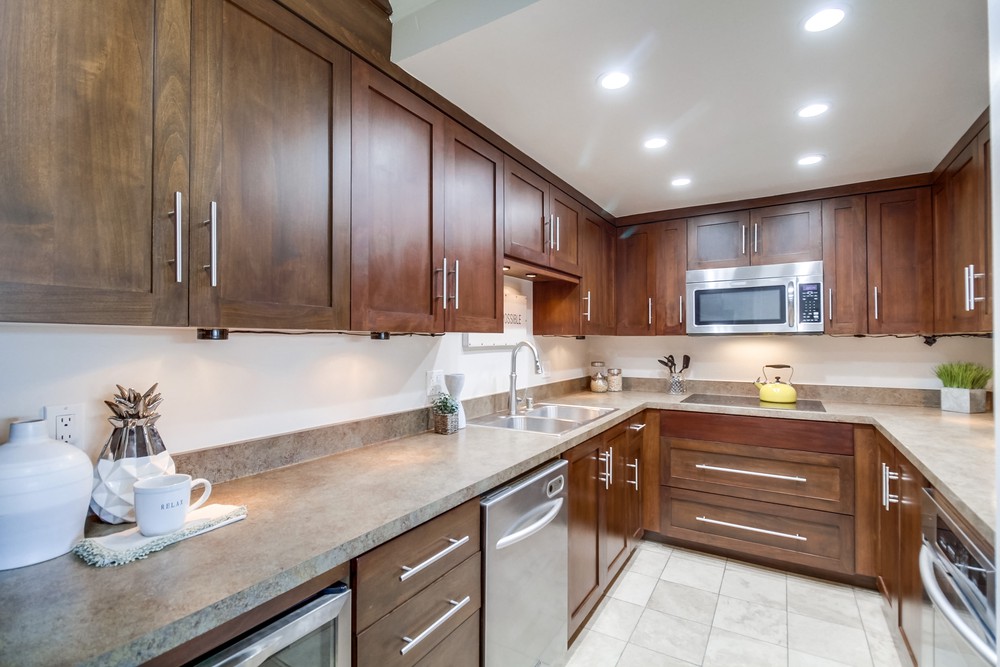 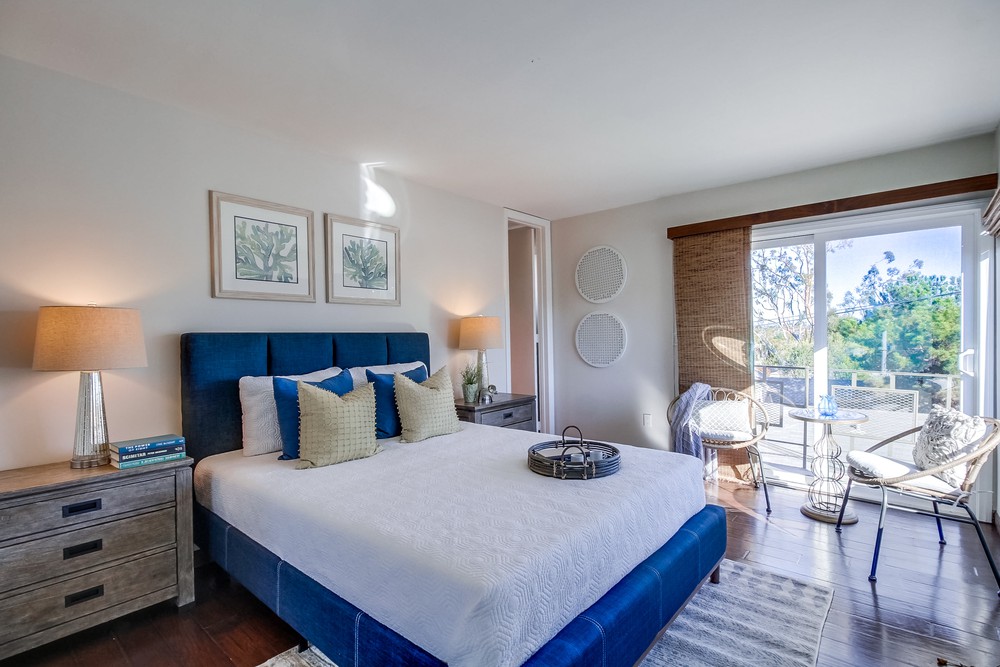 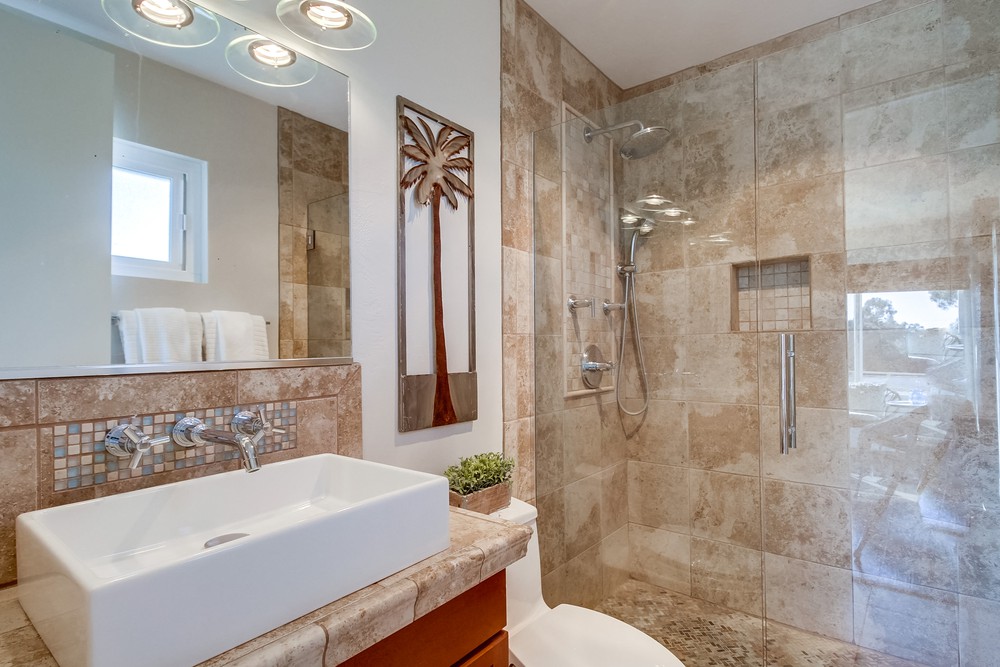 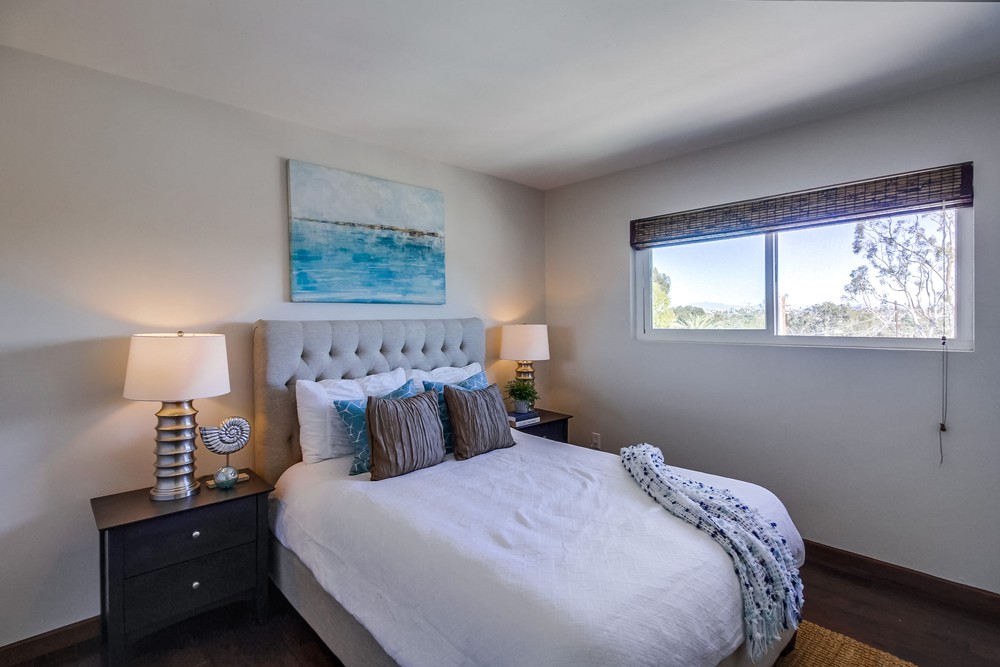 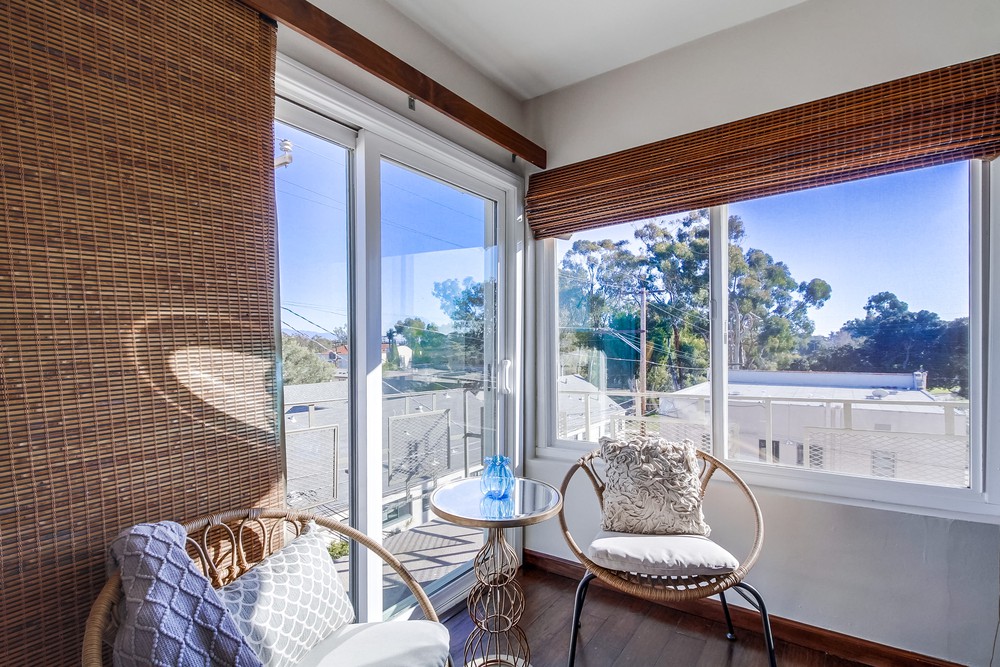 Rob Dawg suggested that we examine the quartiles, and they show how top heavy the inventory is today. Almost one-quarter of the homes for sale between La Jolla and Carlsbad are priced over $10,000,000!

I’ll get those on a graph and we’ll follow along each week.

There have been 40 new pendings in each of the last two weeks, and there are already more pendings than actives – including nine new pendings this week priced over $4,000,000:

There have only been 182 new listings this month, which is way below the January count of 288 last year.  We will take the final number on February 15th for the contest, but it looks like it will be under 200!

All buyers can hope for is that the ultra-low January count can be blamed on the ‘cron and sellers are waiting a month or two. We were hoping this year might get back to normal – now wondering if we can just get close to last year’s inventory count in time for the selling season!

END_OF_DOCUMENT_TOKEN_TO_BE_REPLACED

Who felt that shaker? I heard it first! 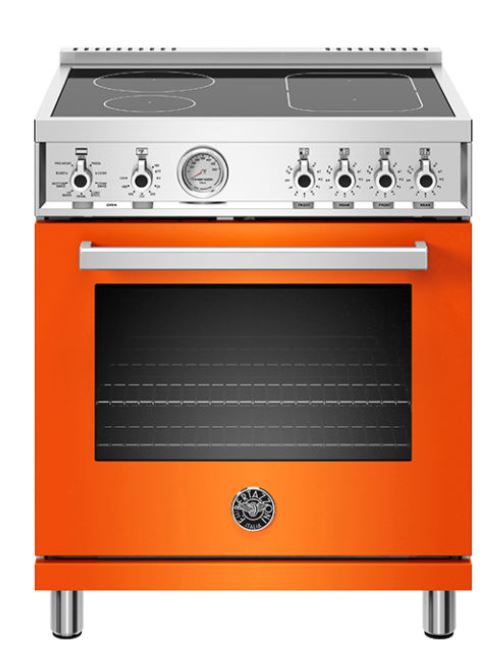 Nearly 75% want electric appliances? I haven’t met anyone who would give up their gas stove.

There are many ways we can make a difference, like reducing our dependence on gas to power our homes. In fact, at least 48 cities in the country have outlawed natural gas in new home construction. If you’re looking for ways to upgrade your home in the new eco-friendly era, here’s where you can start.

The road to a cleaner, safer, healthier planet begins at your front door. Research shows that homeowners have a critical role to play in the race to a zero-carbon world. There are myriad ways we can make a difference, like reducing our dependence on gas to power our homes and putting more solar panels on rooftops. Here’s how to flip the switch on an all-electric house.

When it comes to cleaning up our energy habits—reducing our use of natural gas and electricity generated at coal-and-gas-powered plants—people in the West are ready to change their ways. Nearly three-quarters of Californians said that they would prefer efficient electric appliances powered by clean energy instead of fossil gas, according to a survey conducted by FM3, the California-based research organization, and released by Earthjustice, a nonprofit environmental law firm. And the state energy commission aims to put standards in place that would require newly constructed homes to be electric-ready. In June, on the hottest day in Oregon’s recorded history, lawmakers passed groundbreaking legislation requiring the state to convert to 100 percent clean, “responsible” energy by 2040. At press time, 48 cities in the country had outlawed natural gas in construction of new homes and commercial buildings, according to the Sierra Club’s tally.

Every piece of the technology puzzle that we need to make this dramatic shift in our power supply and our behavior at home already exists.

Is There An Inventory Shortage?

People keep saying that the inventory is low, but it means that there’s not a lot of active listings sitting around not selling (which will be the sign that the frenzy is over). Let’s determine whether the inventory has actually been lower than normal by comparing the number of sales to previous years: 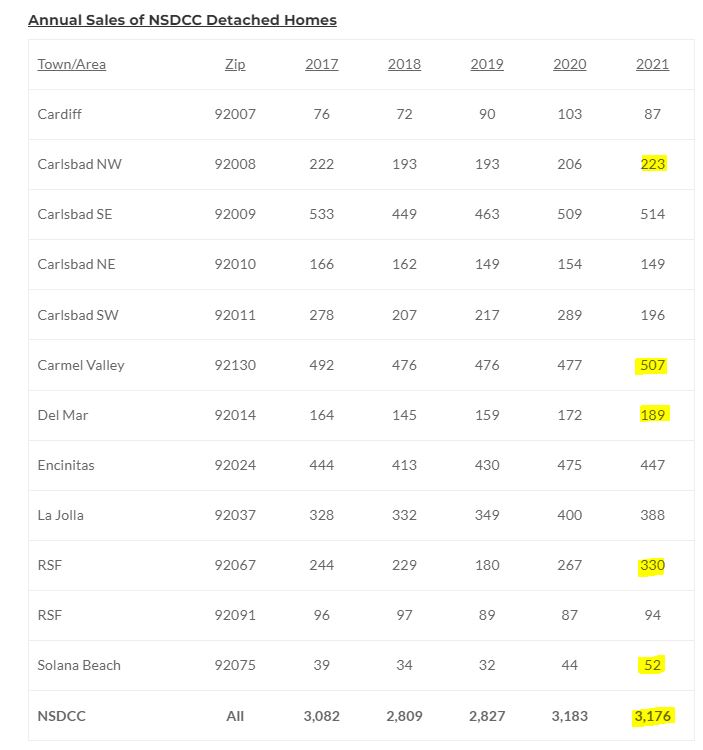 The inventory must be fine, considering the number of 2021 sales in EVERY area were at least the median number of their five-year group, or higher, and the highlighted counts were the BEST of the five-year group. The total of 3,176 will probably increase in the coming months and end up #5 of all-time!

If you are a buyer and feel stymied by the lack of inventory, you may want to reconsider.  It’s more likely that you’re not moving fast enough, you’re not doing it right, or you’re on the outside looking in.

END_OF_DOCUMENT_TOKEN_TO_BE_REPLACED

Among the median eight homes viewed by buyers, three were viewed online only with the help of virtual and video tours as well as virtual open houses, according to NAR data.

The new listings of 2022 are only trickling out, but we know that there can be spurts.

We’re seeing one underway in Encinitas Ranch, where five listings are hitting the market this week! The three Coming-Soons will all change to active listings on Saturday.

Buyers – there is hope!

Whenever there are two or more homes for sale in a neighborhood, there is one fact of life:

The chances of EVERY house being perfectly priced to reflect their condition AND compare favorably to all other choices is about the same as the Padres chances of winning the World Series.  It’s possible every year, but come on.

There are times when NONE are perfectly priced, causing a stalemate and no sales.

The market is hot enough that at least one of these listings will compare more favorably than the rest, and will sell this weekend.  With few or no other choices for sale currently, the ultra-hot frenzy conditions could pick up two of more of these listings.

Let’s see how many go pending in the next seven days!

Hat tip to Rob for the intro to Sevana, who describes her musical sound as “every sound but with a Jamaican filter. Like if a modern Anita Baker was Jamaican and was creating music for Jamaica.”