The foreclosure movie ’99 Homes’ is out – here is the review from Variety:

Here is what the sfgate.com had to say:

“99 Homes,” a gripping, intelligent thriller set amid the bursting of the nation’s housing bubble, zeroes in on the ruination of the American dream and the morally bankrupt characters who profited from the carnage. Like “The Grapes of Wrath,” it’s a classic example of how to take a social issue and turn it into riveting cinema.

The story opens in an Orlando, Fla., bathroom, where a family man has just killed himself to avoid the specter of being thrown out of his foreclosed home. Not long after the yellow police tape has been set up, real estate broker Rick Carver (the incomparable Michael Shannon) is prowling the premises, with an e-cigarette in his mouth, a cell phone in his ear and a gun attached to his ankle. Carver needs to make sure that the dead man’s grieving wife and kids are shooed off the grounds, so he can keep his banker clients happy.

Then it’s off to another residence, where Carver’s next victim awaits: down-on-his-luck construction worker Dennis Nash (Andrew Garfield, back in top form after his “Spider-Man” foray), his mother (the always reliable Laura Dern) and his son. It’s the first of many evictions in this movie, and director Ramin Bahraini imbues all of them with a palpable sense of terror, anguish and heartbreak.

As it turns out, Carver sees a lot of leadership potential in the handyman Nash, who ends up striking a Faustian deal in which he helps the ruthless broker with evictions in exchange for financial help. Because of Garfield’s skill, and the strength of the script, we sympathize with the desperate Nash and his love for his home, even as he forecloses on his moral values.

Likewise, Shannon provides interesting shadings to Carver. On the surface, he’s Gordon Gekko with a “Miami Vice” outfit, but it’s clear that Carver doesn’t enjoy what he’s doing or view it simply as a way to get rich. Instead, he sees himself as a player trying to survive in a game that’s been rigged against 99 percent of the population. Shannon manages to convey an inner loneliness, a quiet desperation that he’s gone too far but can’t turn back. 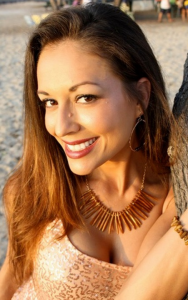 Thanks to bode for sending in this story:

A woman questioned by the FBI after an Allegiant Air Las Vegas – Honolulu flight says a flight attendant having a bad day and ‘taking it out on’ her is the cause of her exposing herself and refusing to put out an e-cigarette inflight.

Passengers on the flight told authorities that Sharp exposed her breasts, swore at the attendant and also threw a crumpled can with soda still in it at him.

But she explained: ‘I didn’t mean to throw it at him. I was trying to hit the trash can that was next to him.’

After putting out her e-cigarette, she allegedly went to the lavatory to continue to vape. Before things got worse though, she apparently “passed out for the duration of the journey.”

Lowest Rates Since May

Dropping mortgage rates are likely to keep buyers interested – and maybe pay a little more to get it done? Jumbo 30Y rates can be had in the mid-3s!

Mortgage rates had another great day, with most lenders maintaining or improving upon yesterday’s 4-month lows.  Given that we’d have to go back to May 8th, 2015 to see better rates, we’re very close to ‘5-month lows.’  In terms of top-tier conventional 30yr fixed rate quotes, 3.875% remains most prevalent.  A growing number of lenders are quoting 3.75% and only a few remain up at 4.0%.  Not all borrowers will see a change in their quoted rate over the past few days, but in those cases, the closing costs would be lower or the lender credit would be higher.

Although there was a reasonable chance that we’d see increased volatility in the markets that underlie mortgage rates today, trading remained calm and positive.  Stock prices and bond yields continued to diverge.  This could have something to do with the way investors approached the end of the month and quarter.  In other words, the volatility that was a risk today, could instead simply be waiting for the new month/quarter tomorrow.  In any event, Friday’s big jobs report always has the potential to send rates quickly in either direction.  While that does mean there could be further improvement for those willing to roll the dice on the economic data, it’s hard to argue against taking that risk off the table with rates near 5-month lows.

Huge single level main house that’s undergone a $600,000 remodel, plus two guest houses for the extended family too.  An incredible parklike setting perfect for kids to run around – and go to Roger Rowe Schools!  This tennis estate has produced two high-level collegiate tennis stars!  Only $2,645,000! 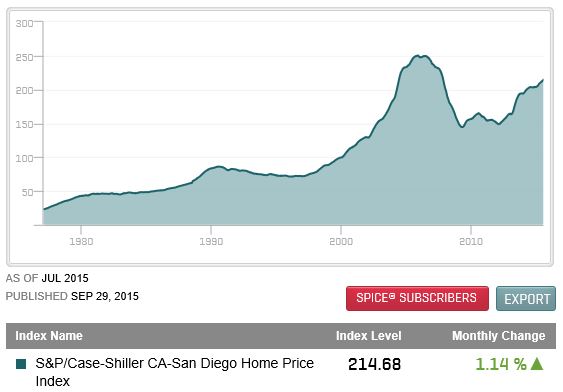 After it looked like we were heading for flatsville, the July reading of the San Diego Case-Shiller Index experienced a big spring-like pop of 1.14% month-over-month.  Here are the San Diego NSA changes for 2015:

Statistics like these are going to bounce around, so making a decision based on one month’s reading is ill-advised.  But the trend this year has been positive!

The Next Ten Years

A big shout out to the commenters on Thursday’s 10th Anniversary Show – your involvement is appreciated!  Rob Dawg suggested that the next ten years will be more interesting – indeed!

What about the next ten years?

Let’s start with identifying where buyers are today – they have arrived.

The inventory of homes for sale is online, and available to everyone 24/7.  The gadgets and gizmos help buyers explore each house thoroughly, and in the future those gimmicks should expand to include full 360-degree video tours, heat-imagery scans, mortgage history, inspection reports, history of insurance claims, title reports , etc.  Most of these are available now, but not for widespread consumer use.

The analytical buyers will love digging around for more data, but most people will be happy reviewing a few photos or video before ordering a personal tour. Once there, gut instinct and emotions take over, and an offer is made.  The listing agent will then dictate how much you will pay, and if acceptable, then the deal is made.  Hopefully you like the price, because for the most part, it isn’t very negotiable.

Wouldn’t that change if we transition back to a buyer’s market?

It might soften up a bit, but note this fact:

Everyone in the real-estate-selling business is on the sellers’ side.  Why?  Because nobody gets paid unless sellers say so – and they only agree when they are mostly happy about getting their price.

It is different now – there aren’t distress sales in popular areas, and we know that if people get in trouble, foreclosures are unlikely – they will get bailed out instead by the Homeowners’ Bill of Rights and government support. Hence, we are stuck with elective sellers – especially in popular areas.

Besides, nobody will side with buyers, unless a fee-only or hourly pay structure is implemented.  But buyers are very reluctant to commit to an open-ended pay package when all they want to do is look at a few houses for sale.

So we have a lop-sided playing field, with agents and vendors (escrow, title insurance, banks, appraisers, portals, etc.) on the sellers’ side, hoping to coax buyers into paying the right price. If the buyers aren’t willing to pay the happy price, they are told to go back to the sidelines – because confronting the seller about going down in price is almost unheard of these days (it’s easier and more dramatic to act offended).

The one thing that could bring a wholesale change to this equation is the auction format.  But that would just level the playing field, and give buyers a more-equitable shot at paying a fair price – though it could be more!

In the meantime, these could happen:

After the big downturn, the San Diego Case-Shiller Index is lower than it was ten years ago.  Where do you think it will be in 2025? 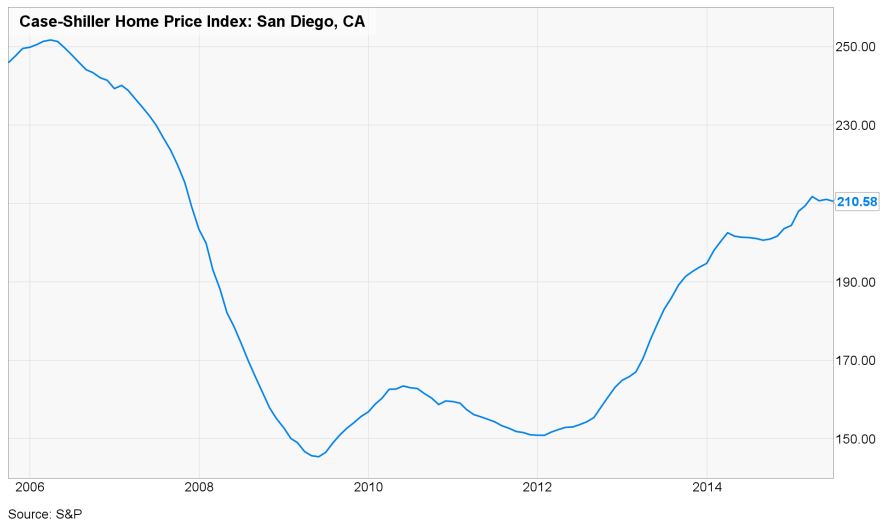 P.S. Speaking of disruptors, remember what Henry Ford said, “If I had asked people what they wanted, they would have said faster horses”. (h/t Jorge)

We have the latest Case-Shiller numbers coming out tomorrow, and Zillow is predicting just a slight M-o-M uptick nationally.  The Inventory Watch began here almost two years ago, and today’s numbers look pretty similar to those in November, 2013.

Pricing statistics have flattened out for now – and the sales are chugging along.  As long as inventory stays tight, expect more of the same.

END_OF_DOCUMENT_TOKEN_TO_BE_REPLACED 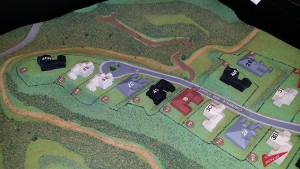 Two of the most successful new-home tracts in the history of Carmel Valley are winding down, and the demand has been impressive.

After 2.5 years, ADM is down to their last 13 homes plus the three models, and they still have 90 people on their priority list – and those had to qualify to get on the list.  This weekend, they are releasing ten homes, starting at $2 million. I love the strategy, because it sends a thrill throughout the entire list of people – everyone might have a shot to buy something!

Further out the 56 corridor – but still in the Del Mar School District – is Verana. In February, they opened the models to sell 78 homes around $1,000,000, and they are down to the last two phases plus a handful of stragglers; of which two or three back to the freeway.

Selling 78 million-dollar homes in less than a year is an incredible sales pace: 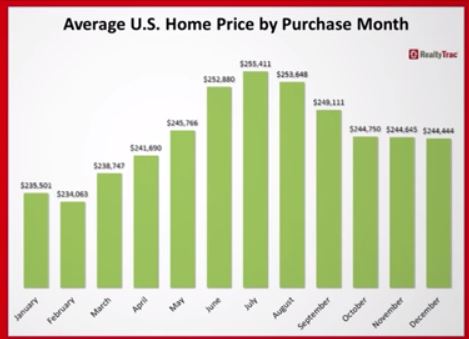 This guy tries to make a case that October 8th is the best day of the year to get a deal on a house.  Generally, let’s just say that the best time to buy a house is when everyone else isn’t – and you still have to be able to find the right house, at the right price: