The traditional spread between the 10-year Treasury Yield and the 30-yr fixed mortgage rate has been 1.75%. Today it is 2.7%, which sure makes it look like the next Fed increase is already priced in.  This week, we will see if mortgage rates will moderate and stay in the fives after the Fed bumps again!

When 10yr Treasury yields are dropping, mortgage rates are typically following, even if the proportion can vary.  Mortgages definitely don’t benefit as much when it comes to overseas developments, but the sense of a big picture reversal is the same in either case.  By Friday afternoon, the average mortgage rate was just a hair lower than those seen in early July.  You’d have to go back another month to see anything lower. 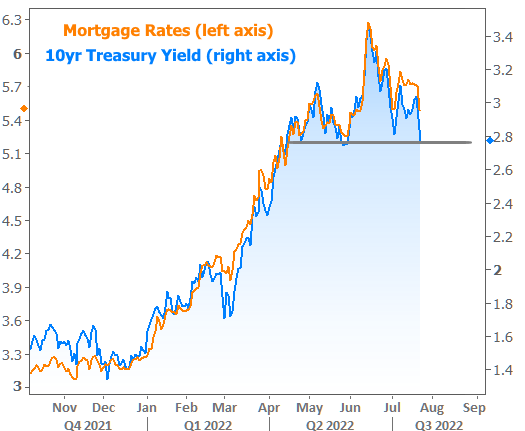 Any conversation about big drops in rates requires an asterisk right now.  Rate quotes can vary greatly depending on the scenario and the lender, but they’re not necessarily as different as they may seem.  The reason is the role of “upfront costs” in the current market.  Historically, it tends to make more financial sense to avoid paying additional upfront costs (aka “points”) in exchange for a lower rate.  Many borrowers may still agree.

Nonetheless, points are packing a bigger punch than normal due to trading levels in the bond market, and that is having an impact on many loan quotes.   For example, there are some scenarios where a single discount point can drop the rate by more than half a percent.  Historically, that point would only be worth 0.25%.

There’s no universal recommendation here. If you find yourself comparing one quote to another, just make sure you’re taking the upfront costs into consideration. 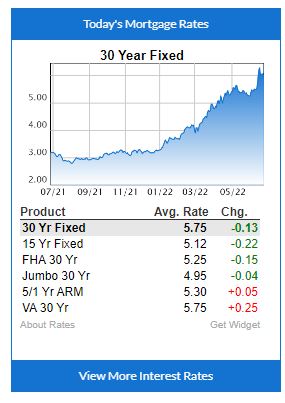 Rates have come down a lot over the last two days.  Last week the conforming rates were into the 6s.

The rates above are with no points, which should mean that you could get a jumbo rate in the mid-4s! 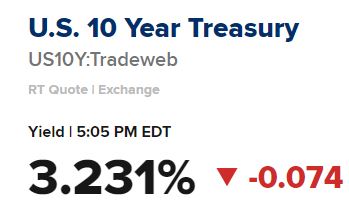 As for Treasuries, yields are now high enough as to be pricing in virtually all of the expected Fed rate hikes over the next year.  Once that happens, the only way for them to go much higher is for the data to deteriorate further.  Bottom line: if we can avoid upside inflation surprises like last Friday’s, we may have just seen the highest rates of the year.

If the bond yields settle down (the 10-year was 3.48% on Monday), and bring in more MBS buyers, then maybe the mortgage companies can give up the extra 1% spread they are sitting on today. Our chances of survival will be much more likely with 5% mortgage rates, then 6%!

Seeing how the government got us into this, let’s note that they are willing to carry some of the burden of higher mortgage rates. At today’s rates, buyers can write off twice as much mortgage interest!

Signed in 2017, the Tax Cuts and Jobs Act (TCJA) changed individual income tax by lowering the mortgage deduction limit to loans of $750,000 and under.

Let’s compare the amount of interest that is deductible in the first year:

The difference between the 3% and 6% mortgage payments is $1,334 per month. With the additional $600 per month in tax savings, it means Uncle Sam picks up about 45% of the difference!

As you can see in my mortgage-rate tracker (in right column), we had another meltdown today, and the conforming rate now is over 6% (with no points).

The idea of paying higher prices AND rates really discourages the move-up/move-down markets.  Combined those with having to pay federal and state capital-gains taxes and the existing homeowners aren’t going to give moving another thought. They probably weren’t giving it much thought any way! And now they might have to sell their home for less?  Forgetaboutit!

While most will be (rightfully) concerned about how the buyer pool could dry up, also keep in mind that for every move-up/move-down homeowner that decides not to move, the supply side shrinks a little more too.

Bill added more towns to this list, and it keeps showing how San Diego is bucking the national trend: 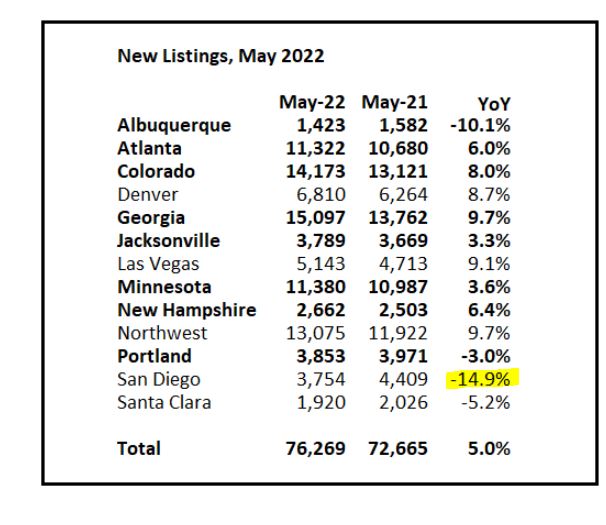 We’ve had enough buyers who NEED a house that sales will keep happening, regardless of mortgage rates.  I’m sure buyers are hoping to just pay the list price, or less, to compensate.

Yet, after rates got into the 5s and several ER sales closed for less, here’s another over-list: 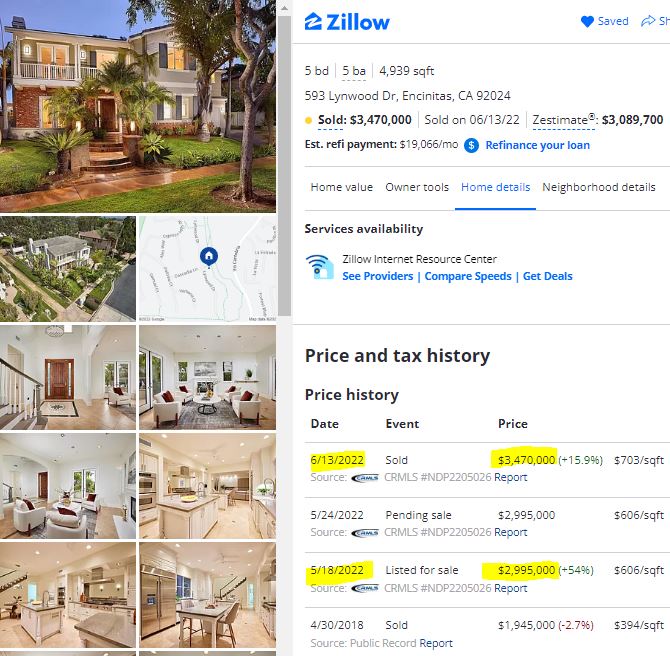 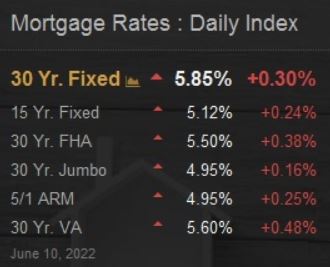 I picked a great day to start the mortgage-rate tracker in the right-hand column! >>>>

How many agents have operated in a 6% environment? It will be less than half of the active agents today. To check, their license number would have to be around 01850000 or lower (real estate license numbers in California are sequential).

Wondering how to cope? Here are my tips:

While the impact on the buyers’ monthly payments is real, it’s the market psychology that will make it worse. Buyers will be expecting lower prices, so instead, consider one of my tips above as an alternative. 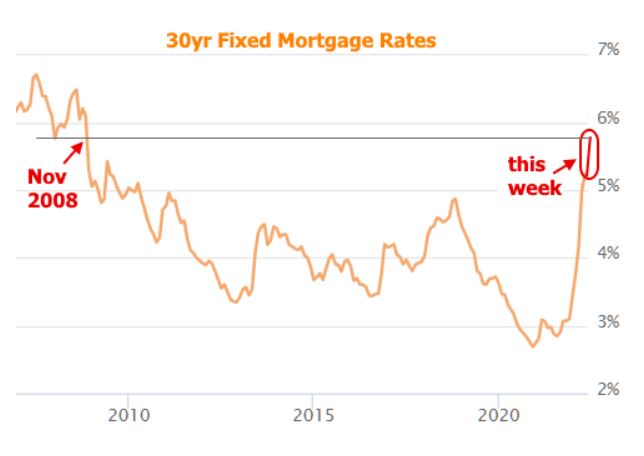 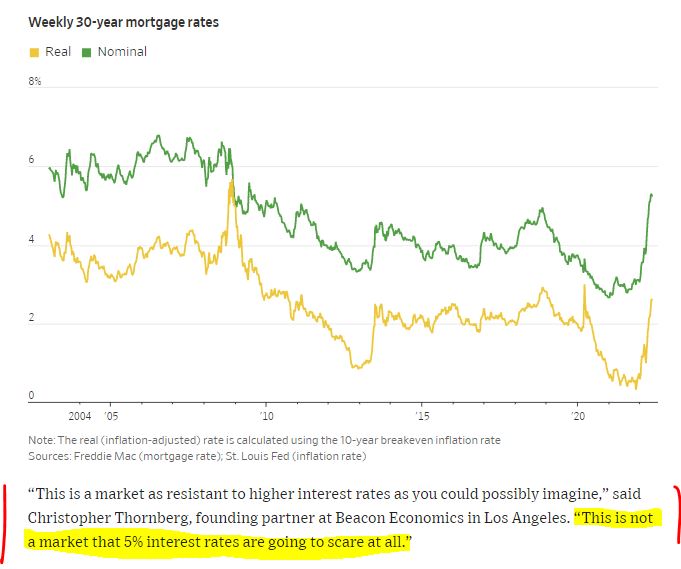 A couple of readers asked about the MBS runoff:

Mortgage Bankers Association Senior Vice President and Chief Economist Mike Fratantoni noted there are two items to watch from the Federal Open Market Committee following this month’s two-day meeting. “First, they announced a 50-basis-point increase in the federal funds target,” he said. “This change had been telegraphed clearly in recent speeches. The statement also repeated the language that the committee ‘anticipates that ongoing increases in the target range will be appropriate.’ In other words, we are far from done at this point.”

Fratantoni said the second, and perhaps most important news, was regarding the Fed’s $9 trillion balance sheet.

“As clearly signaled in the March minutes, the FOMC will move to allow $60 billion in Treasuries and $35 billion in MBS to passively roll off the balance sheet each month, gradually reducing these asset holdings from extraordinary levels,” he said. “The runoff will ramp up over the course of three months, which should allow markets to absorb this excess supply.”

Importantly, neither the statement nor the balance sheet plan repeated the goal of returning the balance sheet to all Treasuries, and there was no mention about the potential for active MBS sales. Musing about active sales has likely increased volatility in the MBS market recently, as investors do not know how to interpret the vague signals that had been given.

“MBA is forecasting that mortgage rates are likely to plateau near current levels,” Fratantoni said.

“The financial markets have attempted to price in the impact of Fed actions over this cycle, and they are likely also pricing in the economic slowdown that will result. Once we are past this rate spike and associated volatility, MBA expects that potential homebuyers may be more willing to re-enter the market. Given how much higher rates will remain above the past two years, we do not expect refinance demand to increase any time soon.” 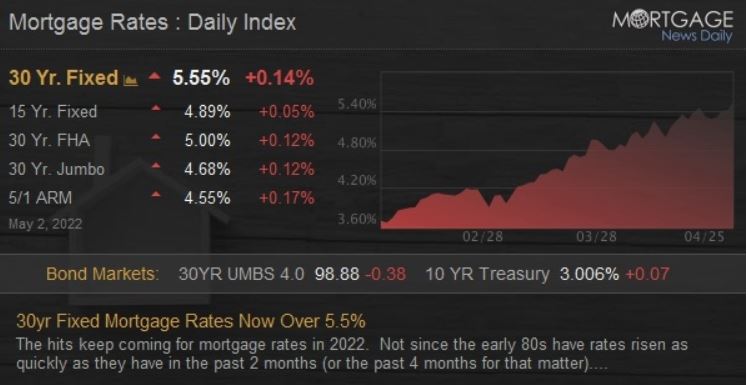 Rates are getting so far ahead of where they should be that there should be some relief once the Fed bumps their fed-funds rate by one-half percent this week. But we’ll probably end up touching 6% in the next 1-3 months.

The hits keep coming for mortgage rates in 2022.  Not since the early 80s have rates risen as quickly as they have in the past 2 months (or the past 4 months for that matter).  Less than 6 months ago, some lenders were still quoting top tier conforming 30yr fixed rates just under 3%.  As recently as early March, those same rates were still in the high 3’s at times.  Now today, the average lender is easily over 5.5%.

Today’s new installment of pain isn’t readily attributable to any new development.  In fact, the entirety of the rate spike only has a few basic ingredients (discussed most recently HERE), but a long time frame in which to play out.  That process should receive some important new information this week when the Fed unveils details about its balance sheet normalization plans.

“Normalization,” in this context, is just another way that the Fed will buy fewer bonds (Fed bond buying is one factor that kept rates as low as they were).  We know the announcement is coming.  We just don’t know how quickly the bond-buying reduction will occur.  This will happen on Wednesday afternoon.  Between now and then (and afterward as well!), rate volatility remains probable.

Where Will Rates Stop? 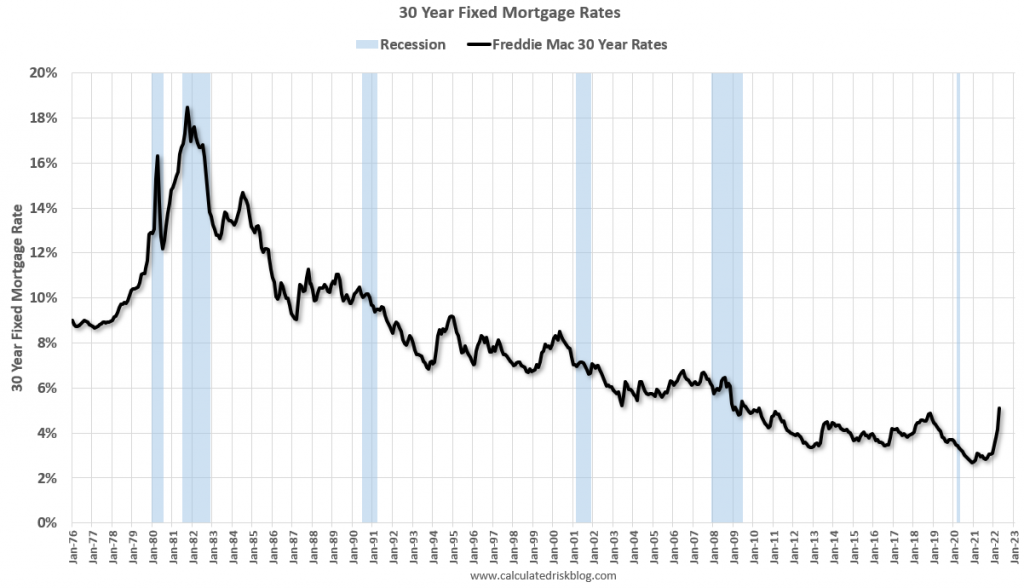 I suggested that mortgage rates should settle into the 4.75% to 5.50% range, and Bill at CR thinks the range will be 5.0% to 5.7%.  Today’s rates are in the low 5s, so we have arrived and buyers should not feel the need to hurry up – but it will be bumpy over the next few months. Those with a short runway can opt for 2.375% for ten years.

Currently most forecasts are for the Fed Funds rate to rise to around 3.25%. Goldman Sach’s chief economist Jan Hatzius recently said he thinks the Fed may have to raise rates above 4%, although their baseline forecast is just about 3%.

Of course, rates are still historically low. But rates are up sharply from the recent lows, and my view is the change in rates is what will impact housing (see my post last month: Housing, the Fed, Interest Rates and Inflation; Housing is a key transmission mechanism for the FOMC).