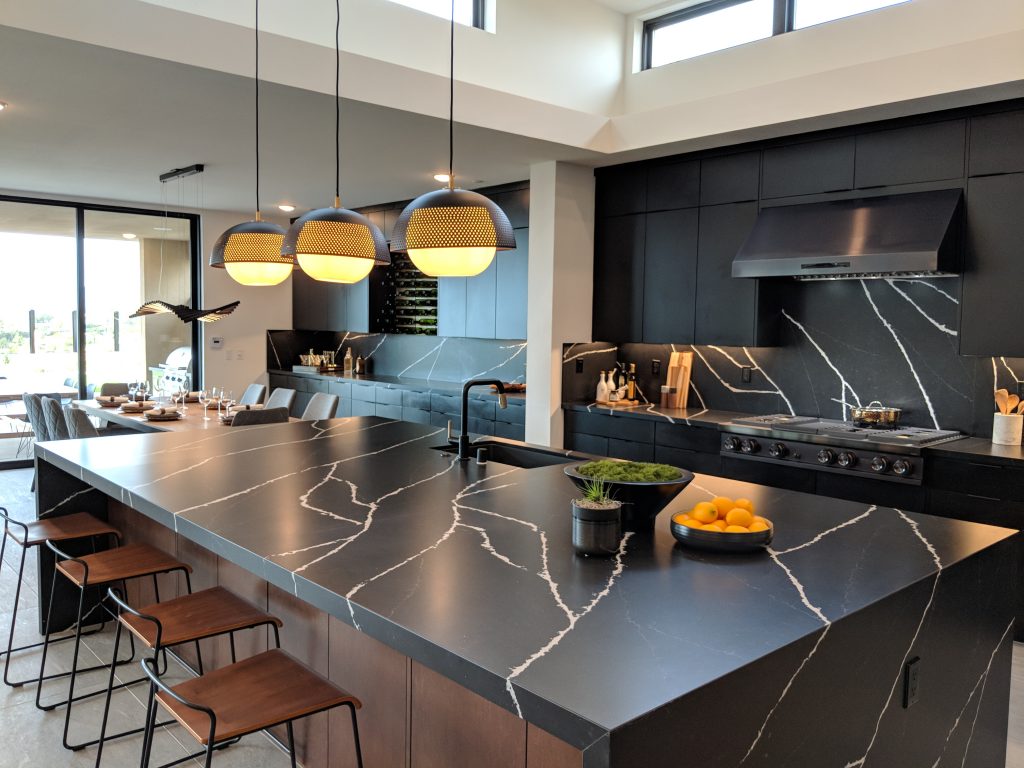 The top-of-the-line Pardee tract in Carmel Valley opened this weekend, and they had hundreds of people show up.  The first release had eight homes available, starting in the $1,700,000s, but prices go up quickly from there:

With so many homes being built in Pacific Highlands Ranch, the Solana Beach school district is struggling to catch up.  They need to build a new elementary school, or expand the existing ones.  It looks like they are a little short on funds to build a new school (would they bump the Mello-Roos?), or instead they could bring in more portable classrooms: 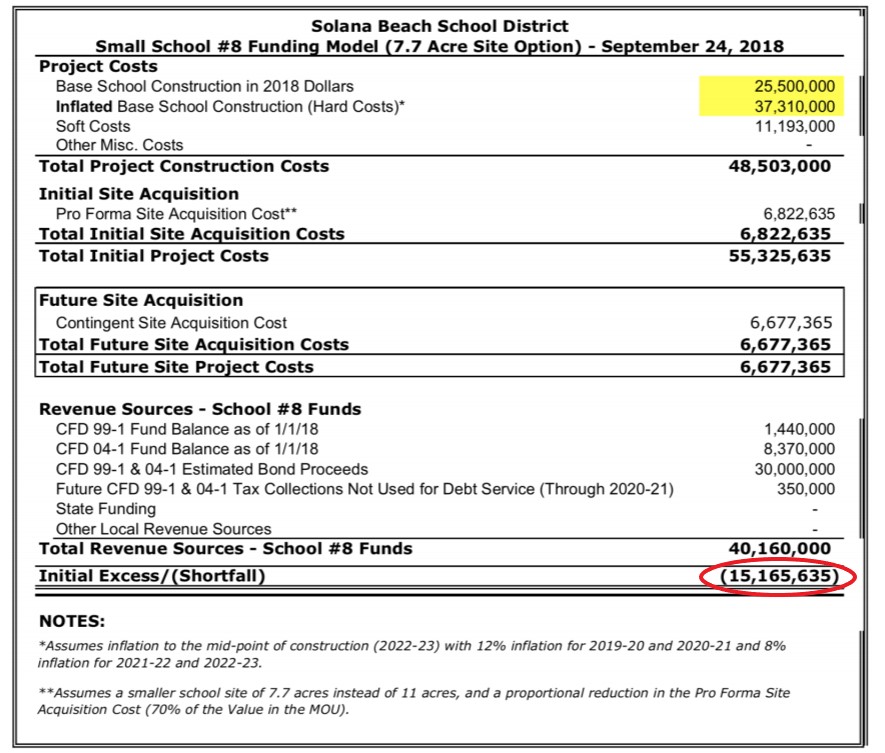 Those spending the first $1.75M to $3.2M will live on Skyglitter Trails: 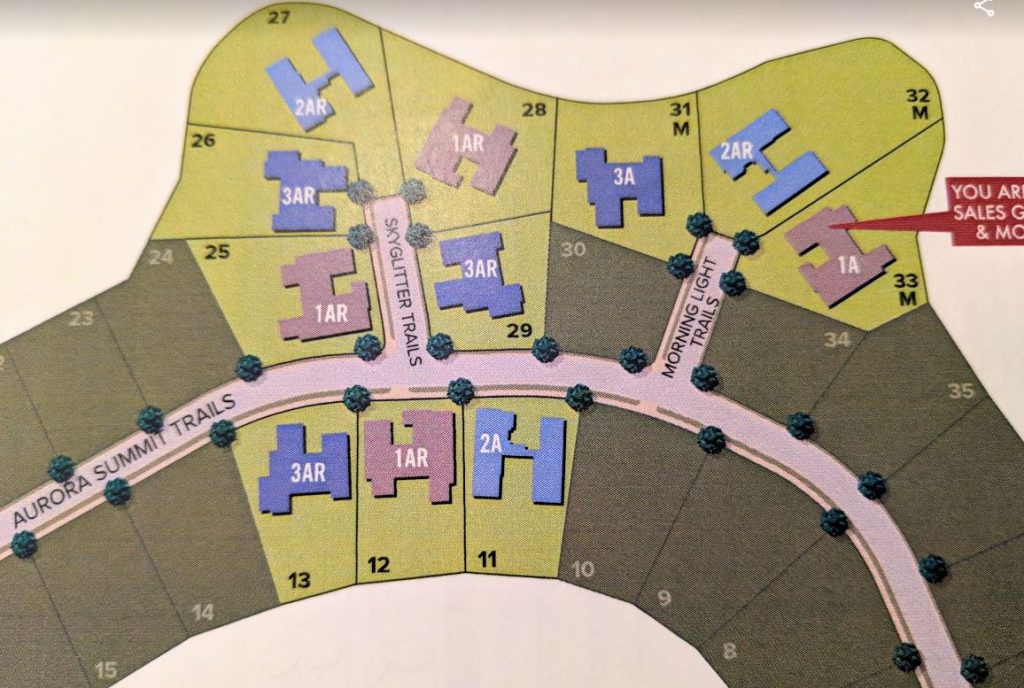 The Statewide Community Infrastructure Program (SCIP) sounds like another name for 30-year Mello-Roos-type bonds whose proceeds are used to pay for things that governments or home builders used to cover.

Here is their intro: 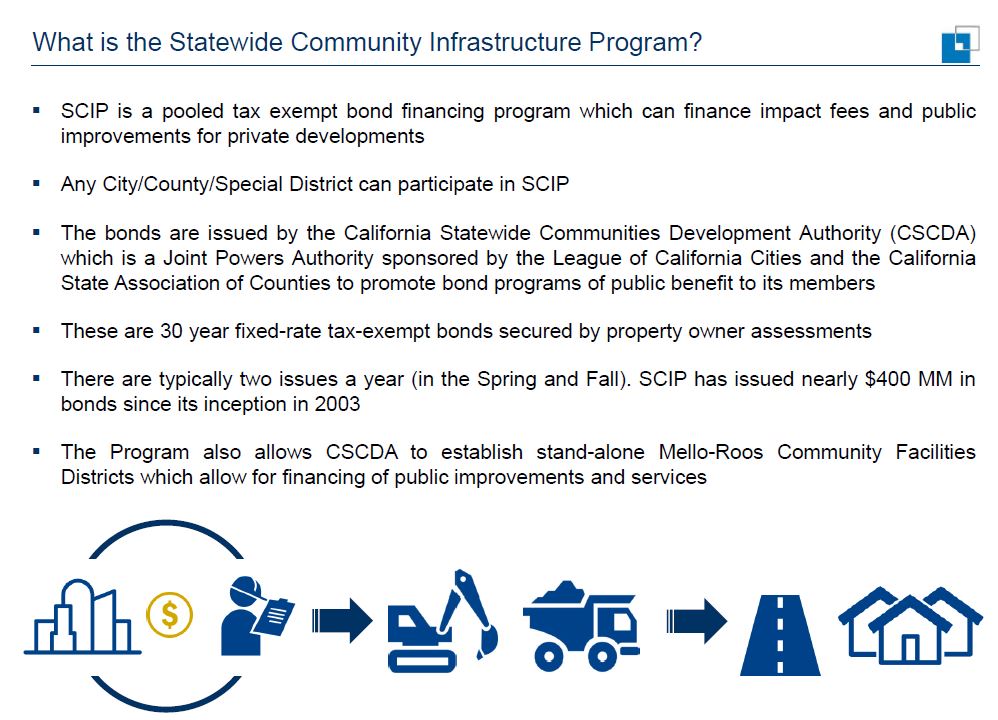 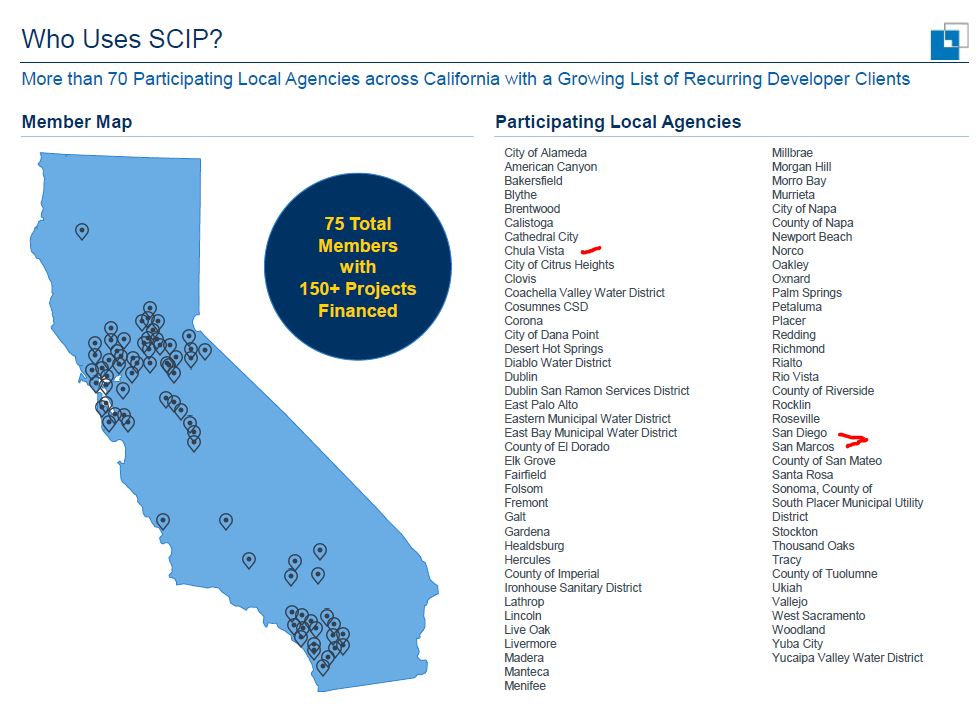 These new homes next to the Crosby look reasonably priced – well, except for the HOA and Mello-Roos fees. They have five of these Plan-2 houses for sale, starting at $250/sf, which isn’t bad for homes with the master suite downstairs, private guest suite, and lot sizes that average 18,000sf.

But the monthly fees will make your head spin, and probably why they have standing inventory.

Shouldn’t every district being doing this? From the nctimes.com:

Property owners in the Old Creek Ranch area of San Marcos will save more than $2 million in special taxes under a bond refinancing that the city completed last week.

Located in the southwest part of the city, at Melrose Drive and Rancho Santa Fe Road, the area is part of a Mello-Roos district that levies special taxes to help pay for roads, traffic signals, and water and sewer facilities.

The refinancing will shave $2.1 million from about $19.1 million in outstanding bonds for those services by cutting interest rates from 5.88 percent to 4.60 percent.

That translates to a 10 percent reduction in taxes, which range on average from $1,070 per year for apartments to $2,420 annually for single-family homes, and $9,388 per acre for nonresidential properties. Under the new bond terms, property owners will save between $107 and $939 per year.

This is the second time this year that the city has taken advantage of historically-low interest rates to refinance bonds in its Mello-Roos districts.

The city took a similar action in January to cut property taxes in the Santa Fe Hills neighborhood of San Marcos by $52 to $141 per year.

Roque Chiriboga, manager of financial analysis and debt administration for the city, said earlier this year that city finance staffers continually monitor the bond market for savings opportunities, and have refinanced special tax bonds about six times in the past 20 years.

The council approved the change for Old Creek Ranch in May, and city staffers completed the refinancing earlier this month.

“At some point, there’s a tipping point where there’s a cost benefit to do the refinance,” city spokeswoman Jenny Peterson said. “When everything aligns and it’s the right move to make, then that’s when we take it to the Council.”

Hat tip to profhoff for sending this in, from the sfgate.com:

On the eve of tax-filing deadline, the Franchise Tax Board abandoned its campaign to get California property owners not to deduct a portion of their real estate taxes.

“We have removed material from our website that limits the deductibility of real property taxes to taxes imposed on an ad valorem basis,” the tax board said in a notice posted Friday on its website:

The news comes at a vexing time for taxpayers. Since the personal income tax filing deadline is Tuesday, taxpayers do not have much time to correct their returns if they followed the FTB’s advice and did not deduct school parcel taxes and eligible Mello-Roos assessments. “Amended returns should be filed if the originals already have been filed or cannot be corrected in time,” the California Taxpayers Association says in a report at www.caltax.org.

In December, the tax board wrote to the IRS asking it to clarify its position.

In a letter dated Feb. 6, an IRS associate chief counsel said the Internal Revenue code does not explicitly say real estate taxes must be ad valorem to be deductible. It says taxes that are not ad valorem could be deductible “if they are levied for the general public welfare by a proper taxing authority at a like rate on owners of all properties in the taxing authority’s jurisdiction, and if the assessments are not for local benefits (unless for maintenance or interest charges).”

Although the letter was dated Feb. 6 and posted on the IRS website in March, the tax board says it never received it.

“We saw it on April 5,” when a legislative analyst ran across it on Taxanalysts.com, a news service for tax professionals, says Denise Azimi, a spokeswoman for the tax board. Azimi confirms the letter was a response to the tax board, even though its name has been redacted.

Do you dislike the idea of paying Mello-Roos fees?  Now that the State of California has changed the tax forms to ensure you can’t deduct them by accident anymore, would you like to pay them off?

This is what a reader found about paying off his Mello-Roos in advance:

Total cost of MR over the next 22 years would have been $160,000, including interest and the 2% increases every year.  By paying off now, I’m looking at next 10-11 years of equivalent MR payments, but I think anyone planning on staying put for over 5 years should consider this as an option.

Besides the cost savings, what are other potential benefits?

Are you thinking of selling?  With your CFDs paid off, you’d be able to offer the benefit of “No Mello-Roos” as an advantage over others for sale in your neighborhood.  Rarely do you see newer houses for sale without Mello-Roos – set yourself apart from the rest of the competition.

By showing buyers how much they are saving in Mello-Roos fees, not only would your home sell faster, buyers would probably pay more – perhaps an extra $10,000 to $20,000 – over others in the neighborhood.

Are you thinking of buying?  Make sure to check how many years are left, and the annual increases.

To get the phone number to the Mello-Roos (CFD) servicer, check the tax bill.

Plug in the address at the link below, and scroll down:

Hat tip to ProfHoff for sending in this update from sfgate.com:

Many California homeowners may be surprised to learn that some charges on their property tax bills are not deductible on their income tax return.

The Franchise Tax Board is on a mission to get California homeowners to follow the law and stop deducting the entire amount of their property tax payment. Increasing compliance would raise money for the state and federal government.

(Reminder: California homeowners must pay the first half of their 2011-12 property tax payment by Dec. 10 to avoid penalties.)

To be deductible, a property tax must be a percentage of the home’s assessed value (known as an ad valorem tax). It also must be imposed uniformly throughout the community and benefit the general community or government.

Any tax that is a flat fee per household or an itemized charge for services assessed against specific property or certain people is not deductible. Nondeductible charges might be identified as Mello-Roos or Community Facilities Districts, 1915 assessment district bonds, lighting and landscape, parcel taxes, school or college measures and bonds, water, sewer, flood, police, fire and libraries, the tax board says on its website.

Property tax bills do not break out which charges are and are not deductible. In many cases, it’s hard to even decipher what the charges are.

Nevertheless, the tax board told tax preparers in September that it was going to add three lines to 2011 California income tax returns asking homeowners for their parcel number, the amount of property taxes paid and the nondeductible amount.

After getting many complaints from the tax community, the board decided in mid-November to postpone these changes until 2012 tax returns and in the meantime try to educate homeowners about the issue.

END_OF_DOCUMENT_TOKEN_TO_BE_REPLACED

The Mello-Roos payments in some of the newer tracts seem outrageous.  But is it the compromise some will make to conveniently buy a house?

After all, there are some great benefits:

Compared to the frustration of chasing around imperfect resales, it doesn’t sound that bad – of course, after you’ve had your head kicked in a few times, anything sounds better!

But what about resale?

Will future buyers shrug off the Mello-Roos, knowing that it is part of the package if you want a newer home, and to live in these areas?  It is temporary, ranging from 25 to 40 years, so once you get close to the end, the math is a little easier. But in the meantime, it could become the compromise that some homebuyers make just to get a house.

But even with the tax credits, they have only sold half of the homes released in the last two months, which should have been the hottest new-home-sales market in the history of the world. You can see it in their eyes, and hear it in their voices – the sales people are getting nervous: