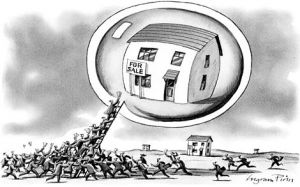 Our local home prices have risen so quickly that it feels like we’re in ‘bubble’ conditions again – could the bubble burst this time?

The last two times the real estate bubble has popped, it was due to banks having to offload their foreclosed properties for whatever the market will bear.  They flooded the market, and buyers – and prices – backed off.

But that has all changed now.

Look at the new devices being used to avoid a flood of desperate selling:

The accounting rules were altered so banks could hold their REO properties longer, and the California Homeowners Bill of Rights has, in effect, stopped foreclosing.  Lenders are now required to offer a loan modification to anyone in default, and only if the homeowner can’t or won’t qualify are they at risk of being foreclosed.   With today’s higher rents, there isn’t much relief for those in default to give back their house and go lease one nearby.  Besides, with our higher home values today, they can always sell before getting foreclosed.

Homeowners who need money can get a reverse mortgage too, as long as they haven’t been tapping into their equity already.

We end up with virtually no desperate sellers who need to dump on price.  Someone who wants to cash out quickly can price their home at last year’s comps and look like a deal!

The game is rigged – the Banking Cartel won’t let the bubble pop again!

For the bubble to pop, we would need a dramatic shift in the supply and demand – either a flood of homes hit the market, and/or we run out of buyers.

I thought we’d be seeing more baby boomers unloading their homes due to downsizing or sickness, and while the market consists mainly of those listings, there aren’t enough of them to call it a flood – at least not yet.  Because they are in quality locations, more kids are probably trying to buy out their siblings and take over their parents’ house, rather than sell it.  They could be moving in with the folks too, rather than sending them to assisted living.

Could we run out of buyers? You would think there would be a price point where buyers can’t or won’t go any higher, but there seems to be a steady flow of people with more horsepower.  We saw two weeks ago the prediction that the population of San Diego County is expected to grow by 700,000 people by 2050, which is over 21,000 per year – where are they going to live? Will they be rich? They will need to be!

There hasn’t been enough (has there been any?) sellers so desperate that they had to dump on price – instead, they just keep waiting.  We would need more than a few price-dumpers to start a panic, which could cause the market to flood with supply and burst the bubble.

Some air might escape occasionally, but it is doubtful that a market change could occur without the government finding a way to save the bankers.

People like this guy think the conditions are ripe for a downturn.  But if prices started falling, sellers are more likely to wait, than dump, which would cause our market to stagnate, rather than crash.