In spite of the exemption-of-taxation-on-debt-relief expiring at the end of 2012, new short-sale listings in San Diego County are dwindling:

Apparently those in the position to consider short-selling:

1. Must not be aware of the looming deadline, or

2. Are thinking Congress will extend the period another couple of years, or

3. Are digging the free rent too much to care.

Hopefully those that do trickle out will be in better shape – like this one:

WASHINGTON — After a lengthy review, a key federal regulator said Tuesday he would not allow Fannie Mae and Freddie Mac to lower the amount some underwater homeowners owe on their mortgages despite new financial incentives from the Obama administration.

Detailed analysis has determined that principal reductions would cost taxpayers money and would not clearly improve the ability of homeowners to avoid foreclosure, said Edward DeMarco, acting director of the Federal Housing Finance Agency. The agency oversees Fannie Mae and Freddie Mac, the housing finance giants that were seized by the government in 2008 as they teetered on the brink of failure.

But DeMarco has steadfastly refused out of concern that it would increase the cost of the taxpayer bailouts of Fannie and Freddie. As of June 20, taxpayers have pumped $188 billion into the two companies to keep them afloat. The companies have paid about $46 billion in dividends back to the Treasury Department in exchange for that assistance, leaving taxpayers on the hook for about $42 billion.

The FHFA has been reconsidering the position because of new Treasury incentives tripling the amount of money offered to owners of mortgages to do principal reductions.

“We weighed these potential benefits and costs, recognizing the inherent uncertainties associated with these estimates … and we concluded that the potential benefit was too small and uncertain relative to known and unknown costs and risks to warrant Fannie and Freddie” offering principal reductions, DeMarco told reporters.

He stressed that Fannie and Freddie offer an array of programs to help struggling homeowners, including those that lower monthly payments.

Treasury Secretary Timothy F. Geithner wrote to DeMarco on Tuesday asking him to reconsider his position.

San Diego’s Case-Shiller Index just barely continued its positive (but very thin) winning streak, rising for the fourth month in a row – though still lower than it was a year ago: 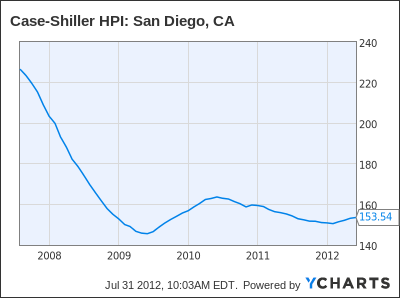 All 20 cities in the index posted positive returns, led by Chicago, where prices rose a whopping 4.5% month-over-month. In Atlanta, where prices dropped 17% over the 12 months ended in April, turned that around in May with an increase of 4%.

Other big winners were San Francisco, up 3.9%, and Minneapolis, where prices rose 3%. The smallest gain was recorded by Detroit, where prices inched up 0.4%. Phoenix posted the best annual return by far, up 11.5%.

“Investor money has come in to some of the hard-hit markets like Phoenix and Florida cities,” said Mike Larson, a real estate analyst with Weiss Research. That has helped stabilize housing by shrinking inventory.

An ongoing change in the mix of homes sold may be contributing to improving prices, according to Stan Humphries, chief economist for real estate website Zillow. Fewer homes are going as foreclosures, which banks discount heavily to move quickly.

Short sales are claiming a bigger market share, according to David Crowe, chief economist for the National Association of Home Builders. They’re often in better condition than foreclosures and the selling process plays out more like conventional sales. Prices, as a result, are higher for short sales.

Realtor video here (you may have seen it on NBC a couple of weeks ago):

Hat tip to SM for sending this in from the Seattle Times:

When homeowners leave their dwelling so complete strangers can take a look, all kinds of things can happen — and they do.

Right from the get-go, real-estate open houses are a recipe for weird and wild stories.

As sellers or buyers, at least half of Americans give an open-house tour a try at least once in their lives, according to the National Association of Realtors.

And for many, it works. Statistics from the NAR’s 2011 Profile of Homebuyers & Sellers show that more than one in 10 homeowners found their current home through an open house; 45 percent of homebuyers attended open houses during their home search.

So what could go wrong when homeowners leave their dwelling — quirks and all — in the hands of a real-estate agent so complete strangers can peruse, scrutinize and snoop?

Plenty, according to our readers.

END_OF_DOCUMENT_TOKEN_TO_BE_REPLACED

Paying Off Your Mortgage?

From U.S. News and World Report:

Many personal finance experts extol the virtue of being mortgage-free.

I agree that, for many people, paying off the mortgage is a great move.

While it may not always maximize your return on investment, the payoff of  having no more mortgage can be substantial.  Chief among those benefits is peace of mind. It’s hard to put a price tag on  that. And this is why so many of us want to pay off our mortgage as soon as possible.

Having said that, there are three instances where paying off a mortgage is the worst mistake a person could make. Let’s go through these one by one:

END_OF_DOCUMENT_TOKEN_TO_BE_REPLACED

Would you mind having to put up with a little?

Is this an endorsement from the Christian Science Monitor?

Sometimes you forget the obvious: The best, smartest thing a homeowner can do is find the right real estate agent for them. There are all kinds of pros out there, with all kinds of approaches and personalities. So how do you find the perfect fit? The easiest ways are also free:

5. Invest in a friend

8. Bring the outdoors in and take the indoors out

Hat tip to downturn for seinding this in from claimsjournal.com:

Michael Davies wanted to see a home for sale in western Michigan. The visit left him with a broken ankle, wrist and elbow.

Davies blamed his real estate agent for his four-foot fall in a dark garage at a Barry County house that had no electricity at the time. But the Michigan appeals court says it’s a case of potential buyer beware: The agent is not liable for the injuries.

The court last week said agent Sandra Johnson and Greenridge Realty did nothing to create the hazardous condition in 2008 and had no duty to inspect the house to look for possible pitfalls.

There’s no indication in the decision whether Davies bought the house – or kept his agent. A message seeking comment was left with his lawyer.