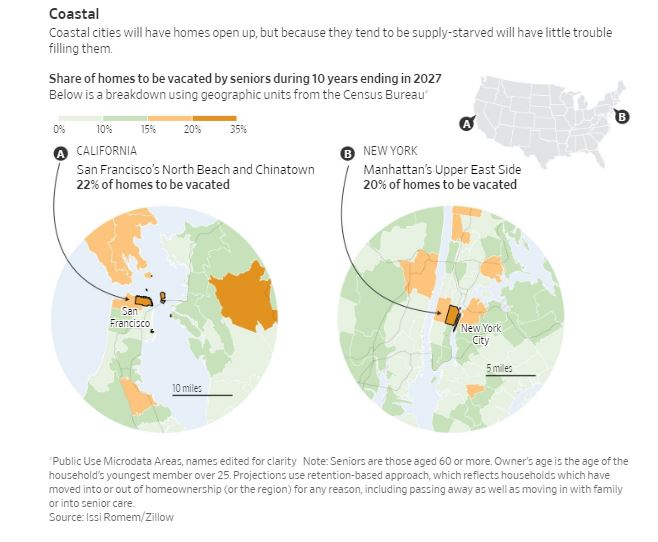 This article features our favorite topic today, and they smartly differentiated between areas. I looked up my sales over the last two years and 22% of them involved the last move of the seller (either they had passed away, or close).

The big question looming in this neighborhood—and dozens of others like it in the Southeast and Rust Belt—is what happens to everything from home prices to the local economy when so many homes post ‘For Sale’ signs around the same time?

The U.S. is at the beginning of a tidal wave of homes hitting the market on the scale of the housing bubble in the mid-2000s. This time it won’t be driven by overbuilding, easy credit or irrational exuberance, but by an inevitable fact of life: the passing of the baby boomer generation.

One in eight owner-occupied homes in the U.S., or roughly nine million residences, are set to hit the market from 2017 through 2027 as the baby boomers start to die in larger numbers, according to an analysis by Issi Romem conducted while he was a senior director of housing and urban economics at Zillow. That is up from roughly 7 million homes in the prior decade.

By 2037, one quarter of the U.S. for-sale housing stock, or roughly 21 million homes will be vacated by seniors. That is more than twice the number of new properties built during a 10-year period that spanned the last housing bubble.

Most of these homes will be concentrated in traditional retirement communities in Arizona and Florida, according to Zillow, or parts of the Rust Belt that have been losing population for decades. A more modest infusion of new housing is expected in pricey coastal neighborhoods of New York or San Francisco where younger Americans are still flocking in large numbers.

On the face of it, this doesn’t sound all bad. Dying homeowners have always needed to be replaced by younger ones and the U.S. has for a number of years suffered from a shortage of housing, a development that has dampened recent home sales activity and kept many millennials stuck in rentals.

But the buyers coming behind the baby boomers, the Gen Xers, are a smaller and more financially precarious generation with different preferences, posing a new kind of test for the housing market.

One problem is that the bulk of the supply won’t necessarily be in places where these new buyers want to live. Gen Xers and the younger millennials have shown thus far they would rather be in cities or suburbs in major metropolitan areas that offer strong Wi-Fi and plenty of shops and restaurants within walking distance—like the Frisco suburbs of Dallas or the Capitol Hill neighborhood of Seattle.

They have little interest in migrating to planned, age-restricted retirement enclaves in sunnier corners of the U.S. lined with golf courses, community centers and man-made lakes—like The Villages, a community of 115,000 in central Florida. Innovations such as voice-recognition technology and ride-share drivers are also making it easier for older people to stay in their existing homes and eschew these retirement communities altogether.

Another challenge is that younger buyers also may not have the financial strength to absorb all of this new supply. New research from Harvard University’s Joint Center for Housing Studies found that households in their preretirement years, age 50 to 64, are less likely to own a home than prior generations, have suffered from stagnant income growth since 2000, and are more debt-burdened, including by student loans.

The consequences of a housing sales glut are potentially wide-reaching. A mismatch between supply and demand in places like Florida, Arizona and Nevada could offer new fiscal challenges that are already familiar to aging cities of the Rust Belt: a shrinking tax base and less money for crucial services like roads and police. Home construction could also falter, dampening an important contributor to the local economy.

“To the extent the local economy is dependent on a vibrant senior population, then it will be more difficult,” said William Frey, a senior fellow in the Metropolitan Policy Program at the Brookings Institution. “Homes will be up for sale and not bought as quickly.”

Housing prices are already stagnating in some places like St. Louis and Youngstown, Ohio as older people die and young people aren’t there to replace them, according to Zillow.

More vulnerable, he said, are small towns and rural areas where young people are less likely to migrate, depressing housing prices indefinitely. “Those are the places that are going to seriously struggle,” he said.