The Cost of Kids 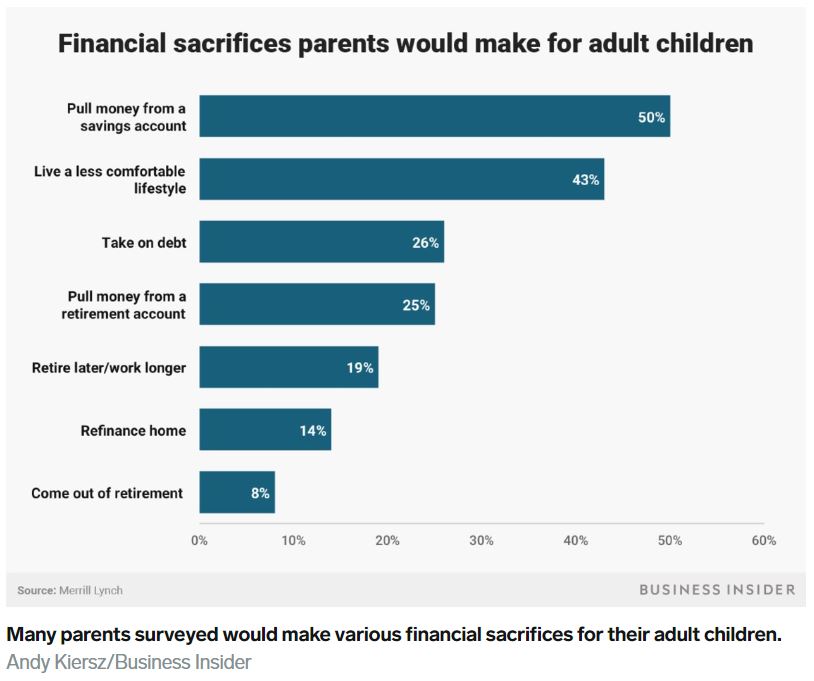 Factor in the cost of raising children into the future housing demand – how much farther can the Bank of Mom and Dad go?  Hat tip daytrip:

The average cost of raising a child until age 18 today is more than $230,000— but that number only gets higher when children leave the nest. In fact, many parents consider it to be the most expensive stage of parenting, according to Merrill Lynch’s new “The Financial Journey of Modern Parenting: Joy, Complexity, and Sacrifice”report.

The bank surveyed more than 2,500 American parents and found that 79% of parents continue to provide financial support to their adult children — contributing to an estimated $500 billion annually. That’s twice the amount they save for retirement — $250 billion annually — according to the report. There are 173 million parents in the US, according to Merrill Lynch.

“When emotions and money become intertwined, parents risk making financial decisions that can compromise their financial futures,” states the report.

So what exactly are parents paying for? The answer is both big and small, with parents covering necessities, like rent or mortgage, as well as luxuries, like vacations.

Of the $500 billion total amount parents are spending on adult children, college education comprises about one-fourth, according to the report; groceries and food cost $54 billion annually and cell phone service costs $18 billion, with many parents covering the full cost, not just handing over a few dollars.