by Jim the Realtor | Jun 24, 2016 | Jim's Take on the Market, Market Buzz, Market Conditions, Why You Should Hire Jim as your Buyer's Agent, Why You Should List With Jim | 0 comments 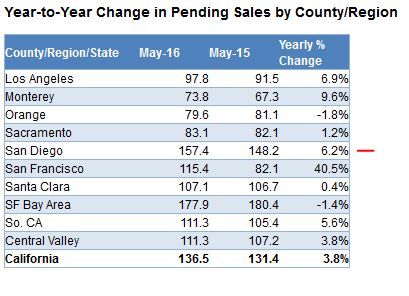 Work with an agent who is well-versed in handling multiple offers!

Pending home sales in Southern California as a whole rose 5.6 percent from May 2015 and 2.4 percent from April, thanks to year-over-year gains of 6.9 percent in Los Angeles County and 6.2 percent in San Diego County. Orange County experienced a 1.8 percent decrease from the previous year.

In a separate study, California REALTORS® responding to C.A.R.’s May Market Pulse Survey reported slower growth in floor calls, listing appointments, and open house traffic, reflecting slowing market activity. Despite the lagging indicators, the percentage of properties selling above asking price reached an all-time high and the number of offers per property rose.

• The share of homes selling above asking price in May increased to 38 percent, the highest level since the survey began, rising from 32 percent in April. Conversely, the share of properties selling below asking price dropped to 34 percent. The remainder (27 percent) sold at asking price.

• For the homes that sold above asking price, the premium paid over asking price declined for the third straight month to an average of 9.4 percent, down from April’s 9.6 percent and up from 8 percent in May 2015.