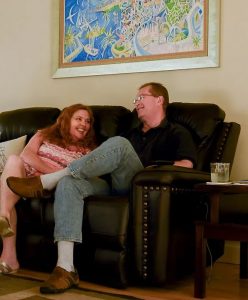 Anyone surprised to hear there are agents soliciting consumers based on their political beliefs?

At first, Stephanie Morris was nervous about leaving Modesto. She’d lived in the Central Valley her whole life, but her family couldn’t keep paying $850-a-month for her sons to share a living room while she, her husband and the baby slept in their apartment’s only bedroom.

The anxiety faded by the time her family pulled out in a U-Haul bound for Salt Lake City on a smoky September night. Morris, 31, had still never been to Utah — her husband liked it when he worked there as a truck driver — but she had discovered a whole world of people planning similar escapes online. They posted faraway landscapes on Pinterest, smiling family photos on Instagram and memes about leaving “Commiefornia” in Facebook groups like “Conservatives Leaving California.”

Unaffordable housing. High taxes. A Democratic stranglehold on state politics. The concerns driving transplants like Morris out of the country’s richest state during the COVID-19 era are not new. What is changing quickly is how disillusioned California residents are coming together by the tens of thousands on Facebook, YouTube and elsewhere online, fueling a cottage industry of real estate agents, mortgage lenders and political advocates stoking social division to compete for a piece of the much–discussed California Exodus.

Facebook groups like “Life After California” are full of stories about $4,000 U-Haul bills and home bidding wars in Texas, but it’s too early to tell if more people are leaving during the pandemic. People move for all kinds of reasons — a new job, to be near family, to buy their first house — and while many online moving groups target conservatives, a parallel migration of more liberal transplants has also scrambled the politics of some red states.

Even before COVID-19, California’s population growth had slowed considerably. Since 2015, the state has lost at least 100,000 more people than it gained each year from other U.S. states, including growing numbers of working class and Black residents. But California is still a top U.S. destination for people moving from other countries, plus affluent transplants from other states. From July 2018 to July 2019, California saw a net loss of 197,594 people to other states.

Scott Shepard has watched these forces collide from his new home in Coeur d’Alene, Idaho. The California-bred realtor started relocation website ExitCalifornia.org and a namesake Facebook page early last year, when he saw a business opportunity in the endless stories of friends and neighbors moving out of state. Now, during the pandemic, the site is so busy he doesn’t have to pay for online ads.

“It’s starting to kind of take on a life of its own,” Shepard said. “I would be straight and say that it is primarily political. Then it really does come down to the cost and taxes.”

Exit California is emblematic of a growing number of online relocation companies marketed heavily on social media. They target prospective transplants who skew white, right and over age 30, though renters post alongside members in the market for million-dollar houses. Between photos of tidy brick facades, crystal-clear pools and recommended moving truck routes, the Facebook pages revolve around ominous articles about Black Lives Matter protests, crime, immigration and, of late, pandemic shutdowns.

Prospective movers who click through to the website can pick a state — Arizona, Idaho, Tennessee, Texas — and see financial incentives to use selected realtors, mortgage lenders or other service providers. Beyond the mechanics of buying a house, the online groups are a platform for places to pitch fed-up Californians who don’t know where to start.

“There’s a fair percentage of them that don’t know where they wanna go,” said Scott Fuller, an Arizona transplant and real estate investor who started LeavingTheBayArea.com and LeavingSoCal.com three years ago. “They just know they want to go somewhere else.”

That’s not surprising to Bill Bishop, author of “The Big Sort: Why the Clustering of Like-Minded America Is Tearing Us Apart.” He’s studied how over the past several decades, neighborhoods across the country have become increasingly politically homogeneous. Where people choose to live has become “a stage,” he said, to flaunt their values as old anchors like a one-company career fade into a blur of unstable jobs, anxiety and dwindling time with family and friends.

“What they’re doing is selling a way of life that then corresponds to political choice,” Bishop said. “It’s kind of pathetic, actually, but what the hell?”

Take the YouTube video “Fleeing California,” which has racked up 2 million views since it was posted in March. It starts with sweeping L.A. views of palm trees and Spanish-tile roofs, then fades to a grainy montage of sidewalk tent cities and a person being pushed in front of an oncoming truck. A moment later, in Texas, viewers see happy kids getting off a school bus and a golden retriever bounding down a jungle gym while Republican Sen. Ted Cruz talks in the background.

The video was made by PragerU, a conservative digital media nonprofit that produces other titles like “Make Men Masculine Again” and “Dangerous People Are Teaching Your Kids.” The California video was commissioned by a donor, producer Will Witt said: Texas ranching and oil scion Windi Grimes, a board director of the Texas Public Policy Foundation and member of Trumpettes USA, a women’s group formed in Beverly Hills five years ago to boost President Trump as the country’s “savior.”

How many people are persuaded to pack up and move by similar videos, social media content or Joe Rogan’s recent podcasts on moving to Texas could help shuffle the country’s electoral map at a pivotal moment. Some of California’s last Republican strongholds, like Orange County, are seeing their residents decamp for other states — a net loss of nearly 25,000 people last year alone — along with notoriously liberal urban areas like L.A., which posted a net loss of more than 97,800 people.

The anti-California political spectacle playing out online has become a hobby for 30-year-old Texas country singer Charley Austin, who started the “Conservatives Leaving California” Facebook group last year. Some members post memes warning newcomers “Don’t California My Texas.” But Austin, who says he has campaigned for Trump, sees an opportunity to keep the state red as cities like Austin (“the San Francisco of Texas,” he said) go farther left.

“There’s nothing really we can do to stop people moving here,” Austin said. “The best thing you can do is help people that move here get acclimated to the state.”