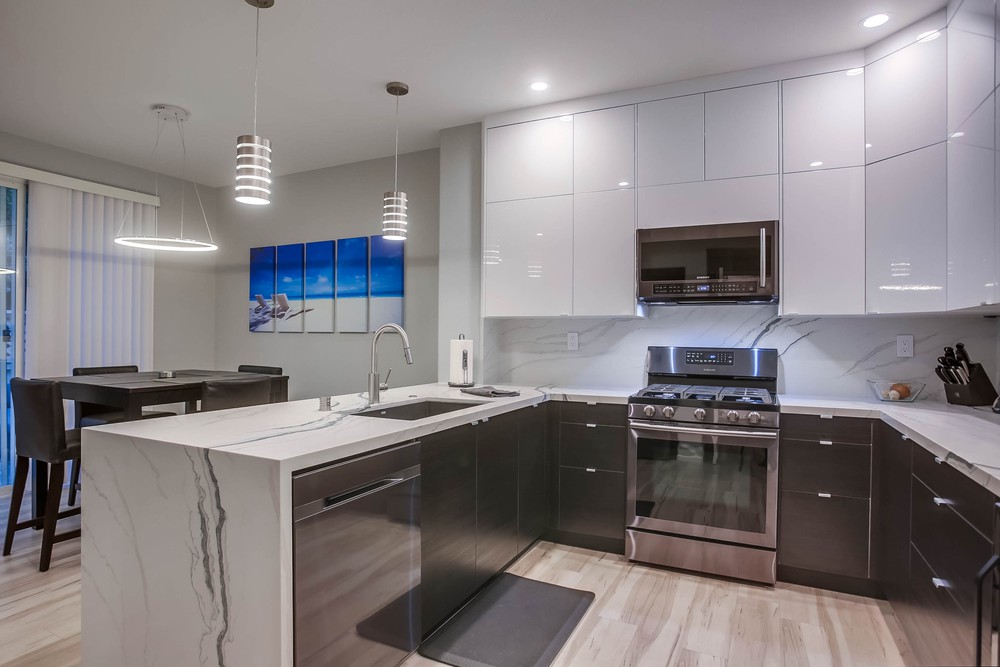 Our Serra Mesa townhouse listing garnered five offers – one at list price, and four over! It will be the highest sale in the history of the complex. Hat tip to ‘just some guy’ for sending this in:

In the ultra-competitive Westchester market, the odds were stacked against Heather Harrison and her client. A stately suburban home that was listed on Tuesday already had 30 showings lined up for that upcoming Saturday.

“I put in a full price offer at $1.275 million, that was the asking price,” Harrison said. “The client went to highest and best on Monday at 5 p.m., and I counseled my client to bid accordingly, waive his mortgage contingency, then we bid $1.45 million and we got it.”

With the suburbs seeing record volume, agents and brokers like Harrison, who runs Compass’ operations in Westchester alongside her husband Zach, are counseling their clients on how to prevail in a fierce bidding war.

According to Redfin, offers on single-family homes in August were most likely to be involved in a bidding war, at 56.6% of offers, followed by townhomes at 54.7% and condos at 41.3% – 54.5% of offers overall engaged in bidding wars.

Time waits for no buyer in the suburbs

With record-low interest rates, paltry inventory and a surge in buyers, agents are advising clients to be extraordinarily aggressive to win.

“You’ve got to really advise your clients appropriately, quickly and make sure that they know there’s not even a week to come see the property – you’ve got to go,” Harrison said. “The property comes on within 24 hours, and if it meets your buyers criteria you want to get them out to see it.”

When it comes to counseling a client through a bidding war, education is paramount, Harrison said. Prospective buyers need to be armed with as much data as possible about the market they’re targeting. Another critical element, according to agents, is not to make the deals contingent upon things like inspections and not to “nickel and dime” the seller. That will set the prospective buyer apart, Harrison said.

“I’ve also been encouraging them to write kind of like a love letter so to speak to the sellers, so they’re not just like an offer on a piece of paper, they’re giving a little color about themselves, why they’re moving, why they like their house, and giving a picture of them so that the sellers can feel good about who they’re selling to and it’s not just about the numbers,” Harrison said.

To win, waive those contingencies goodbye

Susan Hamblen, broker and owner of Long Island-based EXIT Realty Achieve, said that her agents are slammed with business, and homes that are “priced right” are getting offers within the first 24 hours.

“Homes are going $40,000 to $60,000 over ask, easily,” Hamblen said, attributing the bidding wars partly to the influx of buyers from New York City. “We have about two months of inventory and the buyer demand is just crazy.”

Eugene Cordano, vice president and director of sales at Halstead in New Jersey, said that in his market, bidding wars have triggered offers between 15% and 20% over asking, across all home prices.

To that tune, Cordano agreed with Harrison that it’s important to stick out in a bidding war.

“The old axioms of real estate do not change,” Cordano said. “But the highest bid does not always prevail.”

The influx of buyers from New York City to New Jersey at the beginning of April through June meant that there was more money to spend on homes.

“For our seller-clients, we were counseling them on how the buyers waive appraisals or waive mortgage contingencies,” Cordano said. “With the influx of New York City buyers bidding these houses up, oftentimes waiving the financing/mortgage/appraisal contingencies was not a difficult thing to ask for and most of them did that.”

When it comes to buyers, it’s a different story.

“If the buyer really wanted that home, it was often, “How do we structure this offer to make sure that it stands out and wins the day?’” Cordano said. “That’s not a scientific process. Sometimes that is something that’s very emotionally driven, or driven to the point where the buyer really wants it and is just willing to pay and will offer, either in price or in terms, something that will win the day versus all the other buyers that were there.”

Spreading out in the hottest market will cost you

The Dallas suburbs of Frisco and Plano are the hottest because they have low rates of inventory and are priced to sell, spurring bidding wars, Mox said.

“Houses that are more unique with large lots and that have been totally updated [sell quicker], and there’s nothing for the buyer to do but move in,” Mox said. “[That listing] could conceivably have 10 offers, and that’s usually between the price range $250,000 to $400,000.”

Once you get over $400,000 there are fewer buyers and there’s less demand for the property, according to Mox.

“But a $500,000 house could have multiple offers if it has everything the buyers are looking for which is being updated to a large yard or a three-car garage, in the right neighborhood and right school district,” she said.

In Colorado Springs, which Redfin said recently has the No. 1 hottest ZIP code right now, there could be at least three to five offers on a home in the first 48 to 72 hours of being listed, according to Keller Williams Associate Broker Scott Sanchez.

“The typical thing here in the Springs has been a $10,000-plus minimum to go over list price,” Sanchez told HousingWire.

Bidding wars aren’t necessarily uncommon for Peck Barham, a real estate agent at TeamBarham, Keller Williams Homewood outside Birmingham, Alabama, but not at this rate.

“We haven’t seen [bidding] quite like this,” Barham said. “I think in August something like 600 homes went under contract in a three-week period, which for Birmingham is a lot. That’s a lot of homes going real fast.”