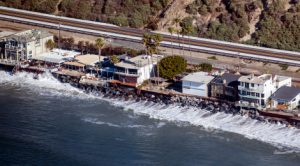 Thanks to the OCR for this article – link at bottom:

Sounding the latest alarm over the devastating impacts sea level rise is expected to have on the California coast, a new report from the state Legislative Analyst’s Office details the critical need for action over the next decade and notes that most preparations so far are only in beginning stages.

Between $8 billion and $10 billion of existing property will be underwater by 2050 and another $6 billion to $10 billion will be at risk at high tide, according to a study cited in the report.

“The certainty of rising seas poses a serious and costly threat,” according to the Legislative Analyst’s Office, a nonpartisan governmental agency that provides policy advice to the state Legislature.

For every dollar spent preparing in advance of disasters, $6 in post-disaster losses are avoided, according to a federal study cited by the Legislative Analyst’s Office. With the state estimating a half-foot or more of sea level rise by 2030 — and as much as 7 feet by 2100 — the report says it’s crucial to take extensive measures over the next 10 years or so.

“After that point, sea levels may already have risen by around 1 foot in many locations,” the state report says. “Once sea levels have risen to higher levels, the planning window narrows and options for how local governments can respond become more limited.”

As an example, the report points to how coastal marshes can be established and fortified to create natural buffers against waves. But if those new marshes aren’t established by 2030, they “may not have sufficient time to develop.”

Prognostications of sea level rise — especially decades into the future — vary widely. Estimates for 2100 range from 1.5 feet to 7.1 feet, according to the state report. But there’s widespread agreement among climate scientists that the sea will rise dramatically as the planet warms and polar caps melt, and some recent forecasts put estimates higher than previously predicted.

The new report relies heavily on studies performed by others, but compiles them to provide a comprehensive look at the impacts, challenges and preparatory strategies involved.

With sea level rise of 3 feet to 6 feet, “up to two-thirds of Southern California beaches may become completely eroded by the year 2100,” says the state report, citing research by the United States Geological Survey.

The same research says that by 2100, 6 feet of sea level rise combined with storms “could impact over 480,000 California residents and $119 billion in property value in 2010 dollars,” the report says.

The erosion of beaches, dunes and coastal cliffs will jeopardize shorefront homes, businesses, roads and other infrastructure.

“California would probably have to build as many as 100,000 additional [housing] units annually — almost exclusively in its coastal communities — to mitigate housing affordability problems,” the report says. That’s in addition to the 100,000 to 140,000 units typically built in the state annually.

Sea level rise could also hurt the coastal economy created by tourism, recreation and marine transportation, which is valued at more than $44 billion a year, the report says.