The End of Coming Soon/Off-Market Deals? 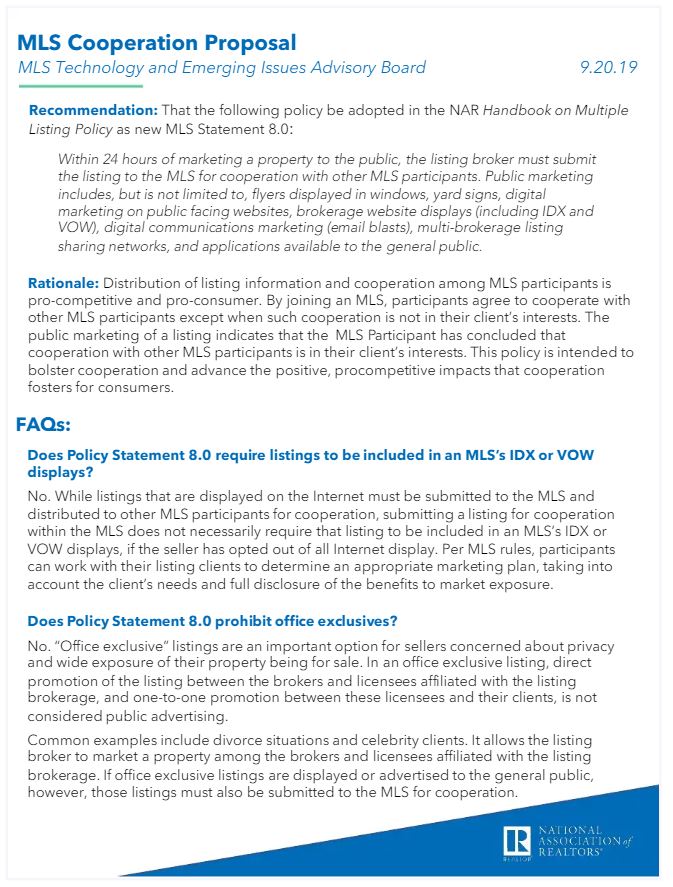 The National Association of Realtors is attempting to regulate a change in the Coming Soon environment – see above. The way it is written, however, will just take us back to the days when off-market deals were done behind closed doors because they are permitting the ‘office exclusives’.

Coming Soons were the industry’s public admission that we do off-market deals, and to give you a chance to get your piece of them. But now the N.A.R. wants brokerages to pick a lane.

1. Comply with the new rule, and change the name of your off-market deals to ‘office exclusives’, where no one can see them.

2. Don’t do anything, and pretend that off-market deals aren’t happening at your shop.

3. Declare publicly that off-market deals are a vital part of your business, and keep marketing them as Coming Soons to the public, in spite of any changes in the N.A.R. rules. What are they going to do?

Numbers 1 & 2 above are the less-transparent choices, and the easier way to go for the agents who justify their off-market deals by saying the seller got what they wanted.

Number 3 is the fully-transparent admission of the truth – agents like to pad their wallets with off-market deals, and don’t see anything wrong with that.

Off-market deals aren’t going away, regardless of the rules.  The existing rules already state that all listings are to be inputted onto the MLS within 48 hours, but it gets ignored and there is no policing or penalties.

It’s better for everyone involved – agents, buyers, and especially sellers – to put every listing onto the MLS to ensure full exposure so everyone can compete. Buyers would feel they had an equal chance to buy, sellers get top dollar, and all agents get a fair chance to earn a paycheck.

But N.A.R. and the industry’s upper management looks the other way.  It will take a class-action lawsuit or new regulations from the federal government to bring real change.