Housing Prices to Revert to Trendline? 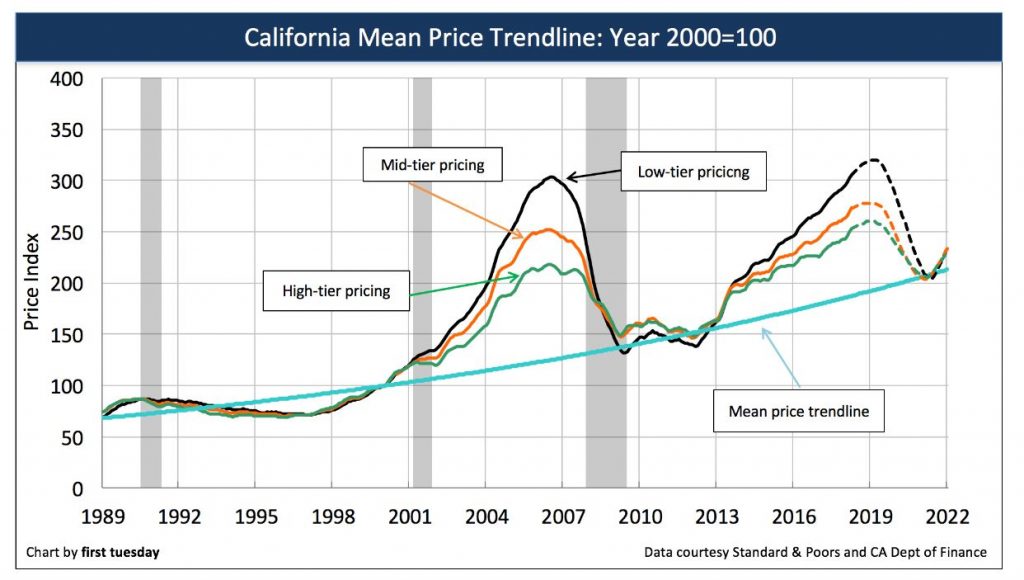 We’re going to be fed a solid diet of ivory-tower analyses from now on, because when you look at the history, it sure seems like home prices are due to come down.  What these authors fail to consider is how the Bank of Mom and Dad has made the current pseudo-bubble possible, and will continue to do so.  Plus, for prices to go down, you must have sellers who are willing to dump on price. None have been that motivated, at least not yet.

This article can’t even get the facts straight – the last bust was caused by exotic neg-am financing exploding in our faces, and ill-informed homeowners bailing out.  In addition, you can draw the trendline anywhere you want, and these authors drew it where it would produce the most drama – see above – yet their worst-case scenario is only back to 2013 prices. We’d survive that.

This most recent cycle we are emerging from in 2018 has its roots in the early 2000s, when home values began outpacing incomes at a rapid pace.

In 2006, home prices peaked in step with the Millennium Boom. By that time, home sales volume was already falling as buyers sensed prices were too high to continue during the inevitable recession, which arrived in 2008. From 2006 to 2007, prices dropped 16%, followed by a further 26% in the following year.

In some ways, this steep fall was a correction to all the excess experienced in the housing market during the early- and mid-2000s. In another sense, the fall was simply the market’s way of bringing home prices back in line with incomes.

There is a name for this reliable force that pulls home prices toward incomes: the mean price trendline.

Through the volatility of housing booms and busts, price increases continue to return to the same rate of annual income change, related to the consumer price inflation (CPI), which is typically 2%-3% per year. In California, this mean price change is closer to 3.5% annually over the past several decades.

How does income impact home prices?

Quite simply, home values can only go as high as incomes allow.

Homebuyers reliant on financing are limited to a maximum mortgage payment of 31% of their monthly income. This translates to the ability to purchase a home costing roughly five times their annual income.

During housing bubbles, home prices become temporarily untethered from this rule and the mean price trendline. During the bust that follows the boom, prices fall, returning once again to the trendline.

2018 is primed for the next downturn

Here’s how the situation stands in mid-2018:

Further, the Federal Reserve (the Fed) plans to continue their efforts to increase interest rates in an effort to cool down the economy and induce a moderate business recession by 2020. Not only do higher interest rates discourage potential homebuyers from entering the market, but they cause homebuyers to offer less when they make an offer to purchase.

In response, first tuesday expects home prices to fall by mid-2019, bottoming once they hit the mean price trendline around 2020. Meanwhile, incomes will continue along at their current measured pace, pausing briefly in 2020-2021 in response to the recession.