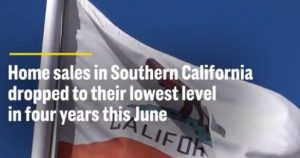 Hat tip to JT who sent in this doomy article about home sales:

Southern California home sales hit the brakes in June, falling to the lowest reading for the month in four years. Sales of both new and existing houses and condominiums dropped 11.8 percent year over year, as prices shot up to a record high, according to CoreLogic. The report covers Los Angeles, Riverside, San Diego, Ventura, San Bernardino and Orange counties.

Sales fell 1.1 percent compared with May, but the average change from May to June, going back to 1988, is a 6 percent gain.

The weakness was especially apparent in sales of newly built homes, which were 47 percent below the June average. Part of that is that builders are putting up fewer homes, so there is simply less to sell.

“A portion of last month’s year-over-year sales decline reflects one less business day for deals to be recorded compared with June 2017,” noted Andrew LePage, a CoreLogic analyst. “But affordability and inventory constraints are likely the main culprits in last month’s sales slowdown, which applied to all six of the region’s counties and across most of the major price categories.”

We already saw that NSDCC sales in May and June were both down 20% YoY, but this month we’re hanging tough with last year!

There’s still time to get in before school starts!