Ethics and ‘Sold Before Processing’

The selling of listings prior to MLS input has happened since the beginning, but in the era of inventory desperation, we’re now seeing companies openly advertising ‘previews’ of their listings before they put them on the MLS.  Before long, the MLS will just become the market of last resort, much like Loopnet is for the commercial brokers.

Home sellers expect and deserve open-market exposure, but nobody in the business wants to give up the hope of double-ending a commission, or making a quick deal and moving on to the next.  Many of these off-market deals involve an outside buyer’s agent, which is really mind-boggling that listing agents are so lazy that they are willing to compromise their fiduciary duty to their own seller just to make a quick buck.

Frankly, this issue is only going to get worse.  Redfin (dozens of times) and other disrupters are doing it too, and we are heading towards having only one agent per sale – which sounds efficient, but will sellers get full exposure? 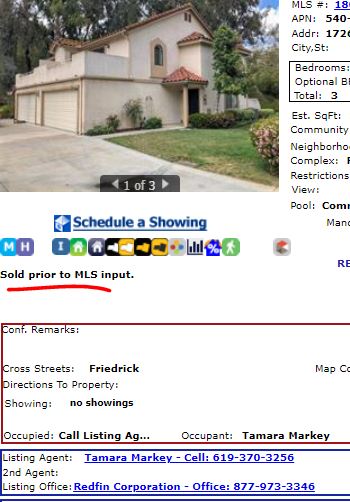 Here’s a solution for those agents who insist on doing it, and a way to ease into a more-ethical era (hopefully):

For agents who say that they have to input their listings per the rules, give me a break. You already broke all the other rules, don’t go holy roller on me now.

Here are the benefits of not inputting your off-market sales onto the MLS:

How bad is it? An agent who sells 100+ homes per year recently told me that half of their listings sell before MLS-input!

We’d like to believe that realtors are ethical – heck, we have a Code of Ethics!  But when tempted to make a quick and sexy off-market deal, most agents can’t resist, even if it’s not in their sellers’ best interest.  I’m convinced that the vast majority of agents don’t even know the difference.