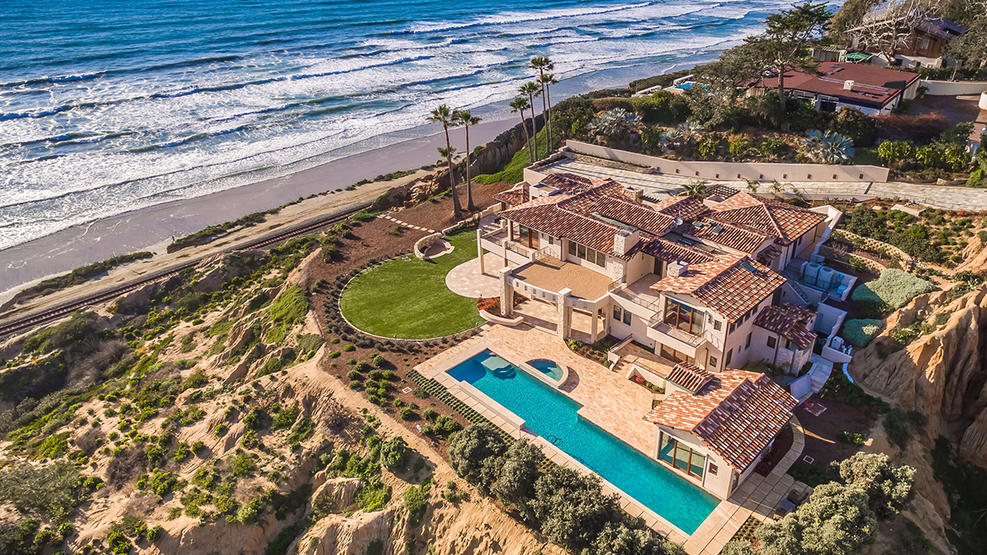 Note the train tracks to the left – just 45 trains per day!

John Hood and his wife Sally have bought a $21.5 million mansion on an oceanside bluff in Del Mar in the county’s most expensive real estate transaction since 2007.

You may recall Hood’s name from headlines in January, when news broke that his stealth life science company, Impact Biomedicines, was acquired by pharma giant Celgene for $1.1 billion up front in a deal that could max out at $7 billion.

Hood’s story is one of perseverance as he worked on the key drug in the deal for more than a decade with two companies. The drug, fedratinib, was near final approval back in 2008 only to be halted by the FDA when safety concerns emerged.

The company was sold, and Hood eventually founded Impact and raised more than $100 million to buy the rights to the drug and continue development.

The Del Mar estate was built over eight years for former activist investor David Batchelder, who along with Ralph Whitworth in 1996 founded the local investor activist firm Relational Investors.

They grew the firm to more than $6 billion in assets before Whitworth contracted throat cancer, and in 2014 they began divesting the firm. Whitworth died in 2016. Batchelder never spent a night in his dream home; he is retired and living in Pennsylvania with his wife.

Among Whitworth’s legacy is a $10 million gift to fund cancer research at UC San Diego and the La Jolla Institute for Allergy & Immunology. Another is putting together the Rolling Stones’ 14-song private show at the Belly Up in Solana Beach prior to the band’s 2015 appearance at Petco Park.

Given that prices are so much higher than they were 5-6 years ago and we’ll still have some late-reporters, it is astonishing that last month’s sales were this close to the six-year average of 170.

New February records in pricing and average days-on-market, and that’s with no duplicate listings included. If we take out the whopping $3,452/sf from the big-bomber featured above, the average for the month was still $550/sf.

New post (Carlsbad Fields of Dreams) has been published on http://bubbleinfo.com - https://www.bubbleinfo.com/2021/09/24/carlsbad-fields-of-dreams/