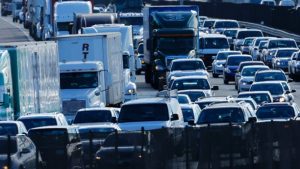 We see these stories regularly now, but nothing is changing.  Even if we had another housing crash and prices retreated by 10% or 20%, homes would still not be affordable for most.  Hat tip to Richard!

For all of its claims of being an economic paradise, California is a failure when it comes to housing.

“California has a housing crisis. We can’t provide housing to our citizens,” said Rita Brandin, with San Diego developer Newland Communities. “In Georgia, Texas and Florida, it can take a year and a half from concept to permits. In California, just the process from concept to approvals, is five years – that does not include the environmental lawsuits faced by 90 percent of projects.”

* 75 percent of Southern Californians can’t afford to buy a home, according to the state realtors association.

* 16 of the 25 least affordable communities in the US are in California, according to 24/7 Wall Street.

* 56 percent of state voters say they may have to move because of a lack of affordable housing. One in four say they will relocate out of state, according to University of California Berkeley’s Institute of Governmental Studies.

* A median price home in the Golden State is $561,000, according to the realtors association. A household would need to earn $115,000 a year to reasonably afford a home at that price, assuming a 20 percent down payment. Yet, two thirds of Californians earns less $80,000, according to the U.S. Census Bureau.

* The household income needed to afford a median-priced home in the Silicon Valley town of Palo Alto is $450,000.

* In San Francisco, a median priced home is $1.5 million, according to the Paragon Real Estate Group.

* Home prices in California are twice the national average, and 70 percent can’t afford to buy a home, according to state figures.

*1 in 10 residents are considering leaving because they can’t afford a place to live, according to a state legislative study, while US Census figures show 2 million residents, 25 and older, have already left the state since 2010.

* In 2016, 30 percent of California tenants put more than 50 percent of their income toward rent and utilities, according to the California Budget & Policy Center. Economists consider 30 percent the limit.

* California needs to double the number of homes built each year to keep prices from rising faster than the national average, according to the Legislative Analyst’s Office.

“The biggest tragedy of California is we have stopped building houses for the middle class,” said Borre Winkle with the Building Industry Association of San Diego. “Think of California’s housing market as a martini class. We’re building some affordable housing at the low end. Absolutely nothing in the middle and the top end is high-income housing, which subsidizes low-income housing. So that is a broken system.”

“Supply and demands works,” said USC real estate professor Richard Green. “People want to be here and we’re not accommodating them with new housing and so the cost of the housing goes up.”