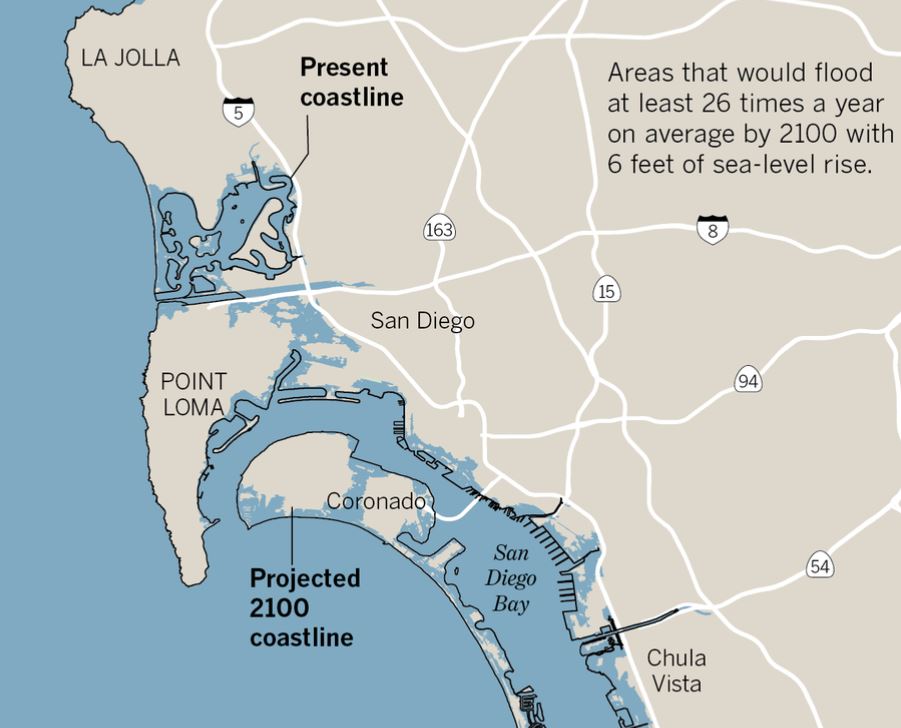 Climate change has been hotly contested, and who knows what the eventual outcome will be.  It’s unlikely that we will have to worry about any possible effects, but your kids might – and look out Mission Beach!  Hat tip daytrip!

As glaciers melt amid the heat of a warming planet, scientists predict that coastal communities in the United States could eventually experience flooding from higher tides.

Conservative estimates range from an increase of about one to four feet in sea-level rise by the end of the century. Experts also warn that people should be prepared for unlikely but extreme scenarios of up to eight feet in sea-level rise, which would cause severe and chronic flooding in hundreds of coastal cities.

Grappling with this problem would be expensive for local governments. Anticipating the costly possibility, the city of Imperial Beach and the counties of Marin and San Mateo last week filed potentially groundbreaking lawsuits to push large oil and coal companies to foot the bill.

According to scientists, sea-level rise is underway in some seaside neighborhoods and comes on top of the potential for large storms to intensify because of climate change. Cities along the East Coast — such as Miami, Boston and Charleston, S.C. — face the greatest risk, but flooding is also projected to harm much of San Diego County’s coastline in the coming decades.

The major questions currently are: How much flooding will vulnerable cities experience, and how fast?

The answers are difficult to determine because it depends largely on future global efforts to curb greenhouse-gas emissions, and there are widely varying predictions about glacial melt in Greenland and Antarctica. Mountain glaciers contain enough ice to increase seas by 1.5 feet, while Greenland and Antarctica have sheets of frozen water that, if melted, would boost ocean levels by 24 feet and 187 feet, respectively.

“Those are the places where a lot of research is being done,” said Chris Zervas, a scientist working on seal-level rise for the National Oceanic and Atmospheric Administration. “And they’re finding more and more possibilities of areas that weren’t believed to be affected in the next century too much by melting and warming temperatures, but are now showing the presence of warm ocean temperatures, warm air temperatures and increased changing of conditions.”

Seaside cities are starting to prepare for the worst, conducting vulnerability studies and considering a suite of options. Among other measures, they can try to armor their coastlines using seawalls, move critical infrastructure and even retreat farther inland. Elected officials could update zoning rules to discourage future building along the water.

According to a new report by the Union of Concerned Scientists, the number of U.S. communities that would flood more than twice a month could double to 170 by the year 2035 if sea levels increase by four to six feet by the end of this century.

“People need to know how much time they have and be adjusting their portfolio of options accordingly,” said Kristina Dahl at the scientific union, who co-wrote the report. “In communities where they maybe only have 20 years before this type of flooding sets in, they need to be thinking in bold new ways.”

She added: “Many California communities have a longer time frame before they would be chronically inundated. So there can be slower-moving strategies that focus on halting or phasing out policies that encourage development in at-risk areas.”

If the sea rises by six feet by the end of the century, more than 600 communities would experience chronic inundation, including more than 50 urban centers from Oakland to Miami to boroughs of New York City, according to the new study.

Under this scenario, damages could significantly start to really rack up. The real estate service Zillow predicts that if tides rise by six feet, nearly 300 cities in the nation would lose at least half of their housing stock.

It also estimates that in such a situation, about 1.9 million homes could be destroyed, with combined loses of roughly $882 billion. Florida stands to lose the most with nearly 1 million homes wiped out. California, New York and Massachusetts also stand to suffer major financial harm from the loss of expensive properties.

But is six feet of sea-level rise likely?

In the past century, the sea level rose roughly seven inches on average. Because of tides and weather patterns, the levels are not constant throughout the planet.

Scientists believe the oceans will likely continue to rise at least by that much through 2100, but could increase by as much as eight feet on average globally.

Still, while scientists have upped their predictions for potential sea-level rise in recent years, conservative estimates fall far short of the six-foot mark.

A report in April from professors at UC San Diego’s Scripps Institution of Oceanography and UC Santa Cruz found that after midcentury, sea-level rise is increasingly dependent on efforts to curb greenhouse gases.

If the fight against climate change proves extremely successful, there’s a nearly 67% chance that sea-level rise could be contained to between one and 2.4 feet through 2100, according to that April analysis. If mitigation efforts fall apart, the report said, the world would most likely see increases of 1.6 to 3.4 feet.