by Jim the Realtor | Jun 9, 2017 | Boomer Liquidations, Boomers, Jim's Take on the Market, The Future, Thinking of Buying?, Thinking of Selling? | 5 comments 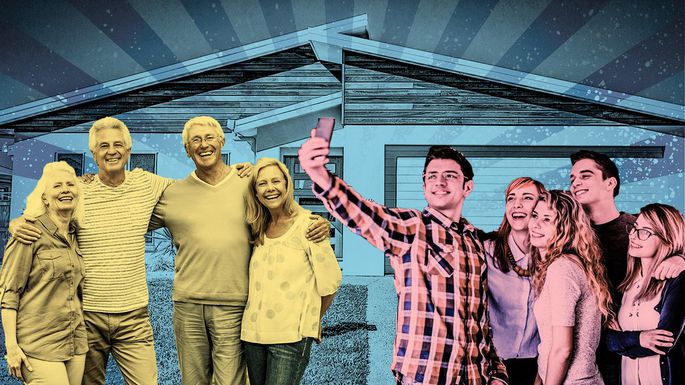 A great article from realtor.com. Excerpts:

As baby boomers look to downsize out of their suburban McMansions, a generational showdown is looming: Millennials might be coming into their own as the nation’s biggest group of first-time home buyers, but they aren’t exactly lining up with bids in hand for those large, expensive homes in the sleepier suburbs. Instead, they’re looking for a different kind of home—the same ones, in fact, that the empty nesters are looking to buy.

It’s a battle of the millennials vs. baby boomers playing out in the nation’s suburban housing markets.

Younger and older generations alike are gravitating toward smaller dwellings in more urban, walkable suburbs and cities, with restaurants and coffee shops around the corner. It’s leading to a real estate traffic jam: Increasingly, boomers are getting stuck, because most can’t buy the home of their dreams until they unload their current ones. And many millennials have neither the desire nor the means to help them out.

“What you have is everyone chasing the same type of home,” says Rick Palacios, director of research at John Burns Real Estate Consulting. “More and more buyers of all ages want to avoid having to deal with a huge yard and all the upkeep and the costs to maintain [a larger] home.”

It’s creating an odd imbalance in a real estate market—a disruption to what has long been considered the traditional generational housing life cycle. And it’s leaving many would-be buyers out in the cold.

When they do make that move to the suburbs, millennials often seek more walkable towns that have many of the urban amenities they’re used to, like bike lanes, social events, and lots of shops and restaurants.

“What’s really attracting millennials are the communities that are bringing the urban flavor out to nonurban towns,” Palacios says. “They don’t want the traditional  massive homes and big yards. They want smaller homes and cool things to do.”

“It’s more important to have proximity to the lifestyle they want,” says Jason Dorsey, president and researcher at the Center for Generational Kinetics, focused on millennials and Generation Z. “Their living room is actually the park outside the condo.”

It’s not just the size of boomers’ homes that is a turnoff; it’s also the style. Times and tastes have changed, and today both boomers and millennials are attracted to modern, open floor plans—which aren’t common in the older homes that boomers are hoping to unload. Boomers like the flexibility of these spaces for aging in place, and millennials like the clean design.

And while they’re willing to compromise on size, millennials are less willing to bite the bullet on amenities. Weened on HGTV, they want high-end finishes, nice countertops, upscale appliances, and luxurious bathrooms.

As for Generation X, having weathered the Great Recession during what should have been their prime earning years, they now have to save for their kids’ college expenses, their retirement, and caring for their aging parents. So they’re not likely to trade up from their starter homes. And if they do, many prefer an easier-to-maintain smaller home in a community with activities they enjoy—just like those millennials and boomers, Dorsey says.

Meanwhile, since the boomers see their home as their nest egg, they’re not all willing to reduce their asking price and shortchange their retirement accounts, says Dorsey. So more of them end up staying put.

“There certainly was a lot of speculation about what would happen if the boomers tried to sell their houses en masse, and whether that would flood the market with a supply of large homes that the younger population didn’t want—or couldn’t afford—to buy,” Porter says. But “the boomers do seem to be moving less and aging in place more.”