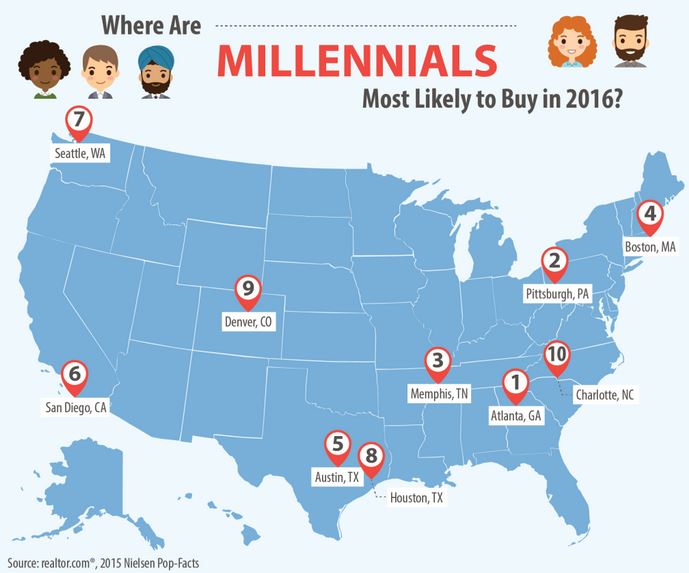 San Diego is the highest-priced in the Top 10 – we want affluent millennials!

Is there any part of U.S. life that hasn’t been dramatically altered by the millennial invasion? This vast group of young Americans has already altered general perceptions of job place behavior, pop culture, media consumption, self-entitlement, and acceptable facial hair. But nowhere is its impact greater felt than in the housing market—and that impact is getting bigger all the time. Numbering 43.5 million, the older group of millennials (aged 25 to 34) makes up 13.6% of the U.S. population but fully 30% of the current population of existing-home buyers.

In 2016, millennials have the power to remake the real estate landscape wherever they choose to settle. But where will that be?

You might assume that young people are naturally drawn to the nation’s largest and most renowned metropolises such as New York City and Los Angeles to jump-start their careers and enjoy the full-throttle excitement of big-city life. And you’d be right—at least partly. But here’s the rub: Increasingly, they can’t afford to live in these places. Sure, Brooklyn may be a notorious hipster/millennial mecca, but how many 30-year-olds can afford $1.75 million one-bedroom co-ops? No wonder shrewd young home buyers are increasingly turning to cities that are relatively affordable and have lots of jobs and maybe even a trendy atmosphere all their own.

As part of the realtor.com® 2016 real estate forecast, we’ve pulled out our ironic Magic 8 Ball to prognosticate the top 10 markets likely to see a surge of millennial buyers. Get ready for an incursion of Sriracha, artisanal doughnut shops, and upscale tattoo parlors! And just to be fair, we also spotlight five places that seem to have lost their charm with the young generation and are likely to see the biggest exodus this coming year.

The ranking takes into our proprietary 2016 Sales & Price projections the representation of millennial users among viewers of “for sale” listing pages on realtor.com from July to October, and the share of head of households aged 25 to 34 relative to all heads of households, from 2015 Nielsen Pop-Facts.