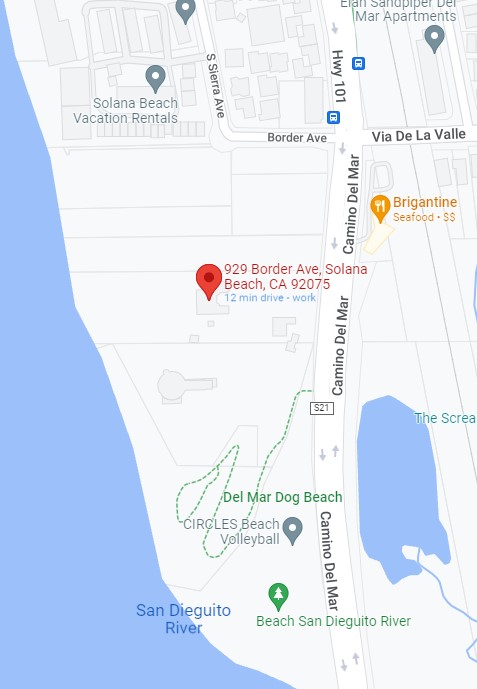 This 6.9-acre oceanfront site has been called one of the most exclusive and unique properties in the United States, and has been listed for sale since 2007 – the current price is $49,000,000. An incredible turn of events is underway – the planned high-end resort was defeated by the voters, so now they want to put apartments there and are using the state’s mandate for lower-income housing as their leverage. From the UT:

A developer is proposing a 259-unit apartment complex on an ocean bluff in Del Mar that was previously the site of a contentious battle over a resort.

Owner Carol Lazier has submitted paperwork and applications to Del Mar for what is being called Seaside Ridge, which would be the biggest apartment complex in the city. Plans call for 85 subsidized apartments, some for individuals making as little as $30,000 a year, on the nearly 7-acre site near Dog Beach.

Lazier and her partners are betting on new state laws that encourage residential building — especially for rent-restricted apartments — to get the plan approved.

“Our plan would help the City of Del Mar comply with the law by building 259 apartment units,” said project spokesman Darren Pudgil. “Seaside Ridge will provide 78 percent of the city’s need for 54 lower-income units (required by the state) and well over 100 percent of the city’s moderate-income need. This will provide equitable coastal access for a range of income groups.”

Seaside Ridge would have nine buildings, some up to four stories, and a two-story parking podium/garage. Taller buildings are clustered in the center and in the east portions of the site. The development would have 305 parking spots and 25 electric car charging stations. The mix of apartments would include 71 studios, 131 one-bedrooms, 38 two-bedrooms and 19 three-bedrooms. It would also include a trail accessible to the public that leads to views of the ocean.

Lazier, the property owner for around 20 years, previously worked with Zephyr Partners and The Robert Green Company to develop a hotel on the site called Marisol. The effort to get the project approved, called Measure G, was defeated by voters in 2020. A developer has not been selected yet for the apartment project, but Lazier has hired architects, land use experts and lawyers.

Lazier is known for her philanthropy, donating $1 million to save the San Diego Opera in 2014 and other donations.

The legal claim for Seaside Ridge centers on Del Mar being out of compliance with the state’s Housing Element Law, which requires municipalities to rezone parcels to meet requirements for housing. Seaside Ridge’s law firm also uses a law signed by the governor last year, AB 1398, that requires local governments to approve most housing projects if they are out of compliance. Del Mar has identified the fairgrounds as a possible site for subsidized housing but has yet to approve a firm plan, setting up an opportunity for Seaside Ridge.

While it remains to be seen how lawyers and staff for Del Mar will interpret Seaside Ridge’s legal claims, housing analyst Nathan Moeder said the legal argument for approval makes sense. Moeder, who was not involved in the project but reviewed legal arguments, said it appeared to be an example of a community unable to escape housing requirements imposed by the state.

Moeder said it would be ironic if the project is approved because residents of the area would probably have enjoyed the resort defeated by Measure G, with restaurants and more public features.

“This is the unintended consequence of NIMBYism,” he said, referring to the anti-housing term Not in my Backyard. “They tried to stop a hotel that was more public-orientated, it had a restaurant and a bar that the public could use, and now they are just going to stuff housing there.”

Moeder said the NIMBY movement will need to get smarter about opposing projects because most land-use fights will now need to be taken up in Sacramento.

“It’s the state that’s making this happen. It’s not the local governments,” he said. “You can pass any initiative or referendum you want at the local level. The state will override you.”