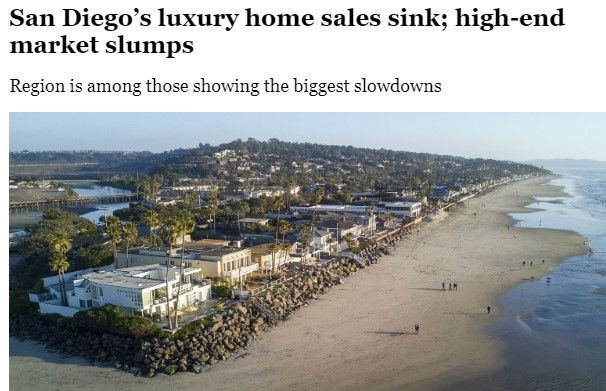 Here we go again with the click bait on the front page of the local birdcage liner.  They also used a photo of the most prime real estate in the county, insinuating that a slump is underway there?

Link here for the full article, and this is an excerpt:

San Diego luxury home sales are down by more than half as the high-end market sees its biggest drop in at least a decade. Out of the 50 most-populated metro areas, San Diego had the fourth-highest drop in luxury sales from June to August, said a report from Redfin released Thursday. The number of sales was down 55.3 percent from the same time last year.

Redfin defined luxury housing as the top 5 percent of the highest-priced homes for sale. So, what is considered luxury differed greatly across metro areas. For example, the median price of a luxury home in Cleveland was $629,000, compared to $3.3 million in San Diego metro (which includes all of San Diego County).

Rising mortgage rates are cited as the main reason for the entire housing market slowing down. Redfin also said economic uncertainty and a tepid stock market also were dampening sales.

Sales are down by more than half?

High-end market sees its biggest drop in at least a decade?

Maybe the higher-end sales in the rest of the county aren’t as boisterous as they used to be, but sales and pricing between La Jolla and Carlsbad looks pretty good to me. These are the stats from the last 2.5 months which should reflect the worst period of the summer slump they measured:

When I search the MLS for detached-home sales over $3,000,000 for the whole county between June and August, this is the result:

I have requested that Compass get into the real estate reporting business so media types have access to what’s really happening, instead of using Redfin’s stories which sensationalize the data to draw more attention to themselves, rather than help consumers properly interpret the market conditions.