These are excerpts from Scott G’s newsletter yesterday:

The most recent migration headlines concern Silicon Valley. The narrative: It sucks and everyone is leaving. Venture capitalists who built their fortunes in the Valley say they’re “over” it. The Bay Area is “crashing” and has become “unhinged” with wokeness. “San Francisco is Detroit and Miami is the future,” claimed a recent VC transplant. Elon Musk relocated Tesla from California to Texas, saying California state laws were “fascist.” Newspapers across the country report on a “tech exodus,” with quotes and anecdotes from aggrieved tech workers. California’s dead. (So is New York.) Tech’s moving to Texas and Florida, and the money will follow.

We’ve been to this movie before — it’s called bullshit. In 2005, Silicon Valley was losing its edge and hemorrhaging jobs. In 2009 it was shrinking, on the brink of death. In 2010 it was on the brink of death again. In 2012 the Golden Age of the Valley was over. In 2014, San Francisco was declared the next Detroit. However, the next Detroit has HQs within a 15 mile radius whose combined market caps rival the GDP of Germany and Japan combined. I know, apples/oranges … both are fruit. You get the idea.

Ninety-seven percent of startups stayed in the Bay Area in 2020. Of the 1.2% that moved, a fifth went somewhere else in California, and another fifth went to New York. The Valley still dominates the startup scene. Last year firms domiciled in the Bay Area received over a third of total U.S. venture capital funding. Austin and Miami received 1.5% and 1.4%, respectively — less than Seattle, Philadelphia, or D.C. I don’t believe a city can sustain a robust technology sector unless it has a world-class engineering school (e.g., Berkeley, Stanford, etc.). Also, declining quality of life and overwhelmed infrastructure is an apt descriptor of … Miami. And Miami’s population actually declined in 2021. 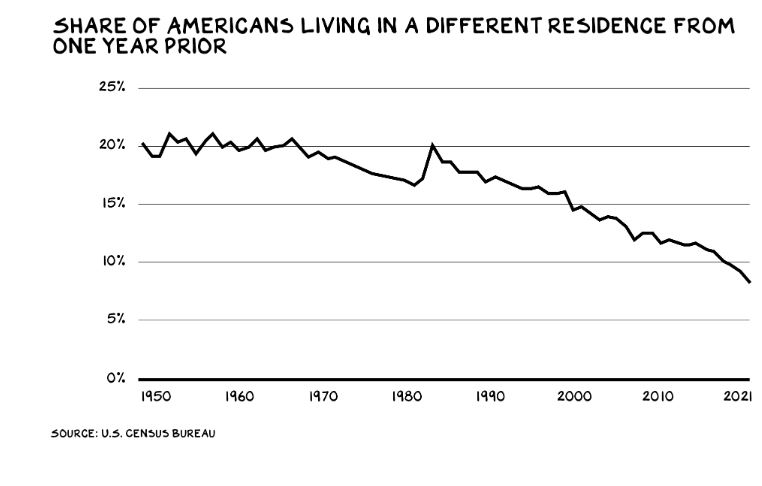 The tech exodus narrative is a distraction. The real domestic migration trend is…..less migration. Specifically, people aren’t moving. In 1948 roughly a fifth of Americans changed residences. That number has been steadily declining since. During the pandemic, we read opinion pieces about everyone quitting their job and moving to Maine. There was a feeling that migration habits were changing; in reality the song remains (increasingly) the same. In 2021, only 8.4% of Americans moved — an all-time low.

It’s been happening for several decades, though nobody can figure out why. An aging population and a younger cohort described as the “complacent generation” are factors, but there must be more. Lack of portable health care and a decline in the lifestyle once sought in the West could also be explainers. My theory is that, like everything else, mobility has become a luxury item costs can only be borne by college grads (who are themselves increasingly anchored by student loan debt).

The problem isn’t that a tech Karen is leaving the Bay Area, it’s that not enough people are leaving any area. “Remote Work” should be called “Work from Home” as it’s decreasingly remote, just at home. Six in 10 people who move stay within their county; eight in 10 stay in-state.