The Future of Rates & Home Prices

From yesterday’s article, which also ran in the SDUT today:

“There are so many strange things going on right now,” said Edward Seiler, the associate vice president for housing economics at the Mortgage Bankers Association.

It has been 40 years since rates have risen like this alongside similar home price growth and high inflation. This time around, the United States also has a severe housing shortage. And then there’s a new and uncertain dynamic — the sudden rise of working from home, which has the potential to change what home buyers want and where they live.

“Nobody really knows what’s going to happen over the next year,” Mr. Seiler said. That makes it hard to predict when rates might start to act as a brake on rising prices.

I have to take a swing at that one!

There are many variables that could slow the increases in home prices, and higher rates are just the latest excuse. Prognosticators said that last year’s velocity was the reason the home prices would cool in 2022 – no one could imagine that they could go up as fast as they did in 2021 – yet NSDCC the median sales price has INCREASED 21% BETWEEN DECEMBER AND MARCH!

But will rising rates be the final blow, and home prices start to decelerate?

Let’s try to predict the path of mortgage rates in 2022. How much worse could it get?

Mortgage rates are loosely tied to the 10-year T-bill, which has risen 0.824% this year: 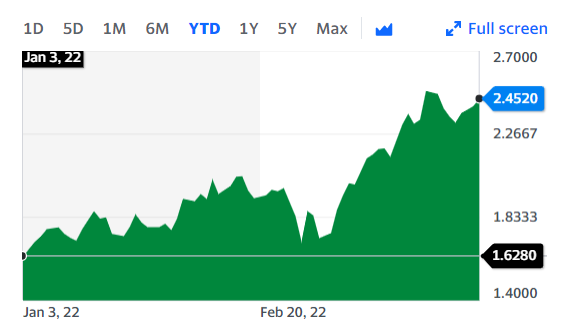 Today’s 30-year fixed mortgage rate is 4.84% so let’s add the additional 0.676% = 5.516%. Because mortgage lenders are like gas stations – quick to overshoot rates on the way up, and sluggish on the way down – we will probably see 6% mortgages this summer as lenders continue to get out in front.

To further demonstrate the current mortgage-rate overshoot, here was the rate on January 3rd: 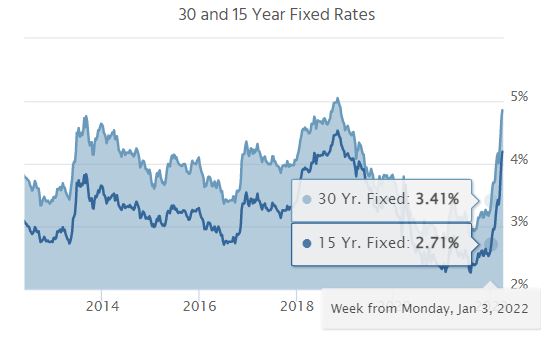 We are due for pullback, but the mortgage lenders will more likely just let it ride, knowing that more Fed increases are coming.  They will panic (again) and mortgage rates will probably be touching 6% in a couple of months, but we should settle into a range of 4.75% to 5.5% by the end of the year – which isn’t much different than it is today. It coincides with the January’s 3.41% plus 1.5% = 4.91%.

Will higher rates than today affect home prices? It depends on the sellers – they get a vote.

If relatively nobody wants to sell at these prices, they sure won’t want to sell at lower prices! Rather than lowering the price, they will blame their realtor for their home not selling, and try again next year.

They’re not going to give it away!

There isn’t going to be a surge on inventory, because it would have happened by now.  But I’m sure there are buyers running to the sidelines in droves, wanting to believe it’s going to be different, later.  There will be fewer offers on homes for sale, and some may not get any! All we have to do is monitor the two metrics, the days-on-market, and the actives vs pendings, to know the trend.

But there are additional variables that will keep prices in this range:

We are pulling into Plateau City.

Even if the buyer psychology crashes, and only the desperate buyers stay in the game for the next few months, we can easily predict what will happen in the second half of 2022. Because both sellers and buyers who didn’t transact in the first half of 2022 will pack it in for the rest of the year, sales will plummet in the last half of 2022. It’s what happens in the early stage of a market shift, because sellers can’t believe they missed the peak and would rather wait, then lower. It will takes several failures before sellers re-consider their price accuracy – and some never will.

Then in 2023, the market will be flooded with lookers, who will be hoping for lower prices than what they remember from summer. But sellers will be packing a little extra on their price, just in case.

What do you think?

Before commenting, spend 15 seconds to watch this response to a ~$3 million off-market listing: