We keep hearing people say that the inventory is rising………..but is it?

Bill’s chart shows how different the San Diego inventory is compared to all the others: 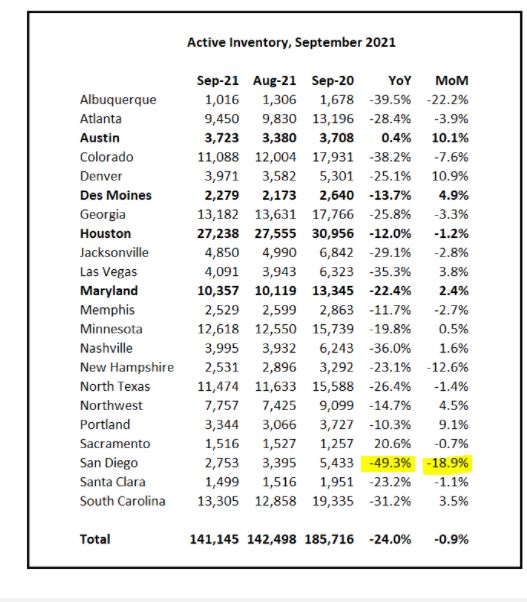 Ten of his 22 metros did have increases in their inventories, month-over-month!  But MOST had declines, with San Diego being the leader – by far.

The San Diego inventory plunged almost 19% month-over-month (second only to Albuquerque) and was the decisive #1 metro winner with the 49.3% decline, YoY.

We have half the inventory we had a year ago!

But it’s not affecting sales, because demand is overwhelming.  The September sales were outstanding – higher than in recent years, except for the big rally in the second half of last year:

How will this play out next year?

Let’s assume that there is pent-up supply, and there is a surge of listings next year – is there precedent?

Yes, and let’s check the last time the inventory had been in decline.  In early 2013, we got a boost of listings, and the waiting demand gobbled them up – and the frenzy was on:

Hopefully it will happen like that again in 2022, and it will be surge-proof. The more listings that come to market, the hotter the frenzy will be.

I’m on a morning call with 150 Compass agents around California. The leader said today that most agents have a 10:1 ratio of buyers to sellers. The demand is there!

But it could be fairly subdued next year, if nobody wants to sell.