Underpricing to Create a Bidding War

Why you should Get Good Help!

Kim Rohrer was looking forward to leaving the leaky windows in the two-bedroom Berkeley rental duplex that she shared with her husband and two small children.

The couple recently found a three-bedroom, two-bathroom chalet-style house in Berkeley listed for $799,000, which seemed relatively affordable for the area.

The house needed significant work, including plumbing upgrades, but the couple wasn’t deterred. “It was like a dream house,” said Ms. Rohrer, who works in human resources for a tech company. (Her husband works at the University of California, Berkeley.)

The couple offered well above the asking price: $850,000. They knew there would likely be multiple offers but they also needed to save some money for the necessary repairs. They didn’t get the house.

They didn’t even come close. The home sold for $1.4 million — nearly double its asking price. “It’s terrible,” she says of her house hunting experience so far. “Completely terrible.”

As the housing market roared back to life in the United States this past spring, with demand far outpacing the available supply of homes, the new normal has come to include open houses with lines out the door, bidding wars and homes selling for well over asking price. According to data from Zillow.com, 37 percent of homes now sell for over the asking price — up from 13 percent in 2018. The typical buyer pays about $2,200 over the asking price, or 0.6 percent, according to Realtor.com, based on a median list price nationwide of $367,000.

But nowhere else in America do homes sell for more over asking price than in Berkeley, Calif., where roughly 80 percent of homes sell above the listed price, according to Zillow. In neighboring Oakland, it’s just over 70 percent of homes. Berkeley also has the highest overbid situation in the country, according to Realtor.com, with listings selling for an average of 19 percent over asking. In Oakland, the typical house goes for 11.2 percent above asking. Many, like the one Ms. Rohrer put an offer on go for much, much more — sometimes $1 million or more.

Daniel Stea, of Stea Realty Group, which has offices in Oakland and Berkeley, recently listed a home in Rockridge, a neighborhood on the border of Oakland and Berkeley known for its charming Craftsman homes and quick BART commute into San Francisco. The house, a 2,400-square-foot, four-bedroom brown-shingle Craftsman, has a large, renovated kitchen and a big backyard with a detached office studio. Mr. Stea listed it for $1.795 million. It sold in August for $3.075 million.

Homes often sell for so much more than their listed price in the Bay Area because brokers intentionally underprice listings to drum up as many offers as possible. Mr. Stea said that while he was surprised the Rockridge home went for as much as it did, he knew it would go for well above the asking price. “I’m a true believer in that the market will always tell the truth,” he said.

The strategy is to create something of a blind auction where buyers try to puzzle out a number that the sellers’ will actually accept and a number that’s higher than all the other offers. It’s a local quirk that everyone seems to acknowledge is just the way that things are done here.

Jodi Nishimura, a Compass agent based in Oakland, said she was surprised when she moved to the area from New York in 2002 and saw how listings were priced lower than their worth, usually around 10 percent less at that time. “It wasn’t common to see homes go for 50 percent over the listing,” she said. The Covid housing boom has made things worse, she said, with certain homes — particularly ones with great outdoor space — selling for huge premiums, well above their listed prices.

Buyers tend to loathe the underpricing — describing it as everything from “a sick game” to “bizarre.” But brokers say it works well for sellers. “Sellers want to keep the bidding war blind,” said Mr. Stea, who had the Rockridge house that sold for more than $1 million over asking. “But it disfavors buyers because they’re shooting in the dark.”

D.J. Grubb, president of the Grubb Company, a local brokerage, also attributed the extreme discrepancy between list prices and sale prices to a fast-moving market where home values have climbed quickly, making it tricky to accurately figure out the value of homes.

Agents in the area use a classic “merchandising strategy,” but take it to an extreme, says Mr. Grubb. Instead of using the retail trick of pricing a $1 million product at $999,000, agents in the area typically advise sellers to price a $1 million home to capture buyers shopping in the $750,000 price range, which means a list price of $749,000. That way, multiple offers will come in with the winning bid typically around $1 million. If enough offers come in, one might come in at $1.2 million — maybe from someone willing to pay a premium to put an end their exhausting housing search, or someone who assumes home values will soon rise to meet what they’ve paid.

When Katy Anderson bought her Upper Rockridge home about 10 years ago, she and her husband remodeled it from top to bottom, including removing a swimming pool to create a large, flat lawn her children used as a soccer field. Ms. Anderson said they were ready to “cash out” and buy a fixer upper in Orinda, a nearby suburb, and pocket some of the equity as a financial cushion.

But that didn’t mean she was going to price it anywhere close to that. “You can never price a home too low, or that’s sort of the theory,” she said. With some nudging from her agent partner, Katie Krembs, she listed her home for $1.795 million, which she admits made her nervous at the time, since it was far less than it was worth. “But at the end of the day, which area of the store gets more attention? It’s always the sale rack,” she said. “The goal of the Realtor is always to get as many eyes as possible on the house.”

The home received 21 offers, including one from Will Dogan and Rafael Reis, who were shopping for a home so they could relocate back to the Bay Area after living in Denver for three and a half years for work.

Mr. Dogan, who has a 2-year-old daughter, said Ms. Anderson’s home had been “spruced up nicely,” and he liked that it had a big flat yard. His real estate agent said the owner was probably hoping for offers well above the asking price, so Mr. Dogan and Mr. Reis offered $2.75 million. They didn’t get the house.

“It was really hard and weird and super stressful,” Mr. Dogan said of the process, which involved circling back with the top bidders for counter offers. “In Denver, if you see a home you like, you just make an offer,” he said. “It’s a pretty straight forward process.”

Ultimately, Ms. Anderson’s house sold for $3.05 million — or more than 70 percent over the asking price. Ms. Anderson said several of the offers were close to the final sale price and they simply chose the highest offer, which exceeded her wildest expectations. “$3.05 million is crazy,” she said.

Mr. Dogan ended up finding another house, in the Berkeley Hills. The property had “only” three other offers and he secured the winning bid with $2.65 million, or 30 percent over asking. He also agreed to waive all contingencies, including financing and inspection.

Ms. Anderson, who benefited from the underpricing strategy as a seller, said she had mixed feelings about it in general and knows “buyers are sick of it.” For agents, it can be exhausting because it means the process includes a lot of disappointment for people who lose out on homes. But it can also make the role of an agent more crucial, as buyers trying to house hunt on their own might not be clued into what any particular listing is actually worth.

“It’s a conundrum in the whole industry right now,” she said. “It feels like you’re duping people into making offers.” And yet, “the results speak for themselves,” she added. 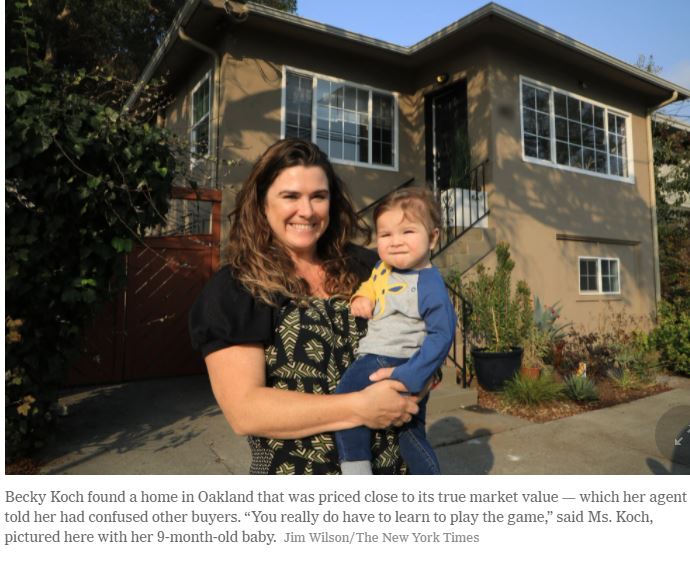 Becky Koch recently purchased her first house in Rockridge after making seven bids on other properties, including one that had 30 offers and sold to an all-cash buyer.

Ms. Koch, who works for a technology company, and her husband, an assistant principal, decided to change their search parameters to include only homes that had been on the market for 20 days or more, longer than the typical two weeks. Their thinking was that those homes might be the ones they had the best shot at because they had received the fewest offers. They found a three-bedroom home in Rockridge priced at $1.185 million, which appeared to be in the ballpark of the home’s true market value based on similar homes that had sold recently in the area. Her broker told her the “transparent” pricing had confused buyers and left the sellers with no immediate offers.

The seller then lowered the price to $895,000, which Ms. Koch said she thought probably confused buyers even further.

They won the house with a $1.2 million offer and moved in a couple months ago with their 9-month old baby. “You really do have to learn to play the game,” she said.

Sneha Madiath has been looking for the past six months in Oakland and Berkeley with a budget of $1.5 million and offering as much as 30 percent over asking. One house had a listing price of $900,000 and sold for $2.3 million. “You don’t know whether you should bid 20 percent over the asking price? Fifty percent over? Double it?” she said. “I feel like I’m in a John Malkovich movie.”