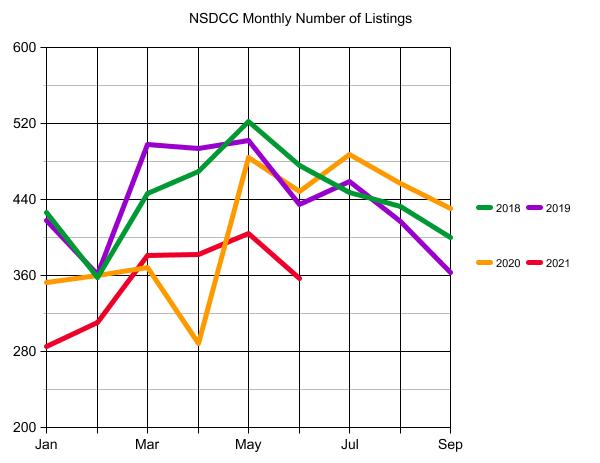 The Covid Frenzy has had remarkable shift in market efficiency like we have never seen.

Historically, we have had so many listings that 35% to 40% of them didn’t sell.

This year we had 977 listings hit the market in 1Q21, and 80% of them have already closed escrow!  Of the remaining listings that haven’t sold, two-thirds of them were cancelled, withdrawn, or expired which usually means that the sellers either changed their mind or refreshed their listings.  Of the 977 listings, only 47 of them remain as active (unsold) listings, with a median list price of $6,900,000!

There were 357 new listings last month, and 340 sales?!?!  The lack of inventory or the rapidly-rising prices aren’t slowing down sales!  If only there were more houses to sell under $2,000,000!

If sales were to retreat, it would seem obvious that it would be due to the lack of supply.  There have been more losers of bidding wars than winners, and that demand has yet to be satisfied.

But we are going to hear more doomer talk in the media. Here we have Larry predicting that more homes will be listed in the latter half of 2021 – which would cause MORE sales – yet check the headline:

What happened: All regions saw an uptick in pending sales, led by a 15.5% surge in the Northeast. The South saw the smallest increase, with a 4.9% uptick.

The big picture: The uptick in pending sales could be sustained, Yun argued, because of the strong stock market and rising home prices. He predicted that more homes will be listed in the latter half of the year, which would help to slow the pace of home-price growth.

Still, economists generally anticipate that the second half of 2021 will see a slowdown in real-estate transactions. To get an idea of where home sales are headed, look no further than the data for mortgage applications.

“Sales lag mortgage applications, and the 26% plunge in the latter between December and April is now working its way through the sales numbers,” Ian Shepherdson, chief economist at Pantheon Macroeconomics, wrote in a research note. He went on to argue that “sales will soon hit bottom, given the flattening in mortgage demand over the past couple months.”

The latest mortgage-applications data from the Mortgage Bankers Association would back up that prediction. The trade group’s index that measures the volume of applications for loans used to purchase homes was down 17% from a year ago as of the week ending June 25, and had declined 6% from the previous week.

Hit bottom? Bottom of what?

The ‘26% plunge’ in mortgage applications between December and April didn’t slow sales – they are higher in every market.  But determined to find some doom, he surmises that the lower number of purchase applications will catch up to sales some day?

It doesn’t occur to the ivory-tower types that the market was going ballistic last summer, and this week’s mortgage apps being 17% lower than last year is not alarming.  We had 350 NSDCC sales last August, and another 361 sales in September – both record highs!

Yet the media publishes this garbage without a thought.  They could unwittingly cause a slowdown just when more homes might be coming to market – which would goose sales higher, not lower.