Did you get concerned about the pending index falling another 10% last week?

The U.S. housing market is suffering from its lowest supply in history, and that is taking an increasingly hard toll on sales.

Pending home sales, a measure of signed contracts on existing homes, fell a wider-than-expected 10.6% in February compared with January, according to the National Association of Realtors. Sales were 0.5% lower year over year.

“The demand for a home purchase is widespread, multiple offers are prevalent, and days-on-market are swift,” said the Realtor’s chief economist, Lawrence Yun. “But contracts are not clicking due to record-low inventory.”

The pendings between La Jolla and Carlsbad are doing just fine. In spite of the total number of NSDCC homes for sale being fewer than usual, people are still buying at a torrid pace: 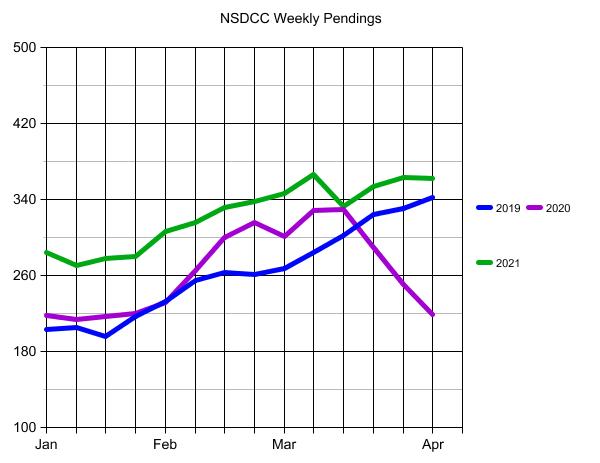 Our market was helped by having more homes for sale.

After the first two months of this year, the total number of NSDCC new listings was 26% behind 2019.

The MLS ‘upgrade’ of September, 2020 added an extra status type called ‘Active Under Contract’. I’m including those under the pendings, and ‘Actives’ are those marked as active listings for sale. The pendings count by price have been suspended on Sept 28 & Oct 5 and will be in the future until they stop omitting the price (THIS HAS BEEN FIXED STARTING IN 2021). I started using SDAR stats on March 15, 2021, which are pure houses only. The NSDCAR stats have 10-25 more in their SFR and 2-4 unit categories which aren’t pure houses.