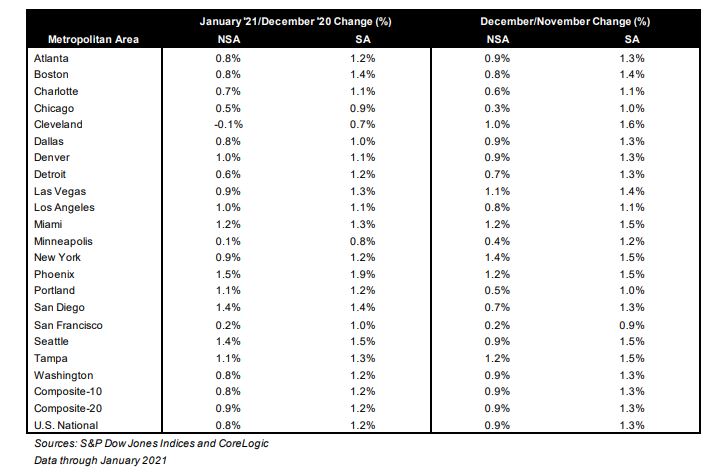 Every metro area on the list is having substantial gains in their index, which means there has been a psychological shift happening coast-to-coast on how human beings feel about their homes.  With the real-estate-selling business being one of the last totally-free markets left, it’s going to run wild for a while.

The #1 market, Phoenix, hit +1.9% month-over-month, which is incredible for a January reading.

San Diego had positive gains straight through the Covid-19 era last year, and now we have 2% monthly gains in our sights for the next few months. Look how that compares to the 2019 readings:

“The strong price gains that we observed in the last half of 2020 continued into the f irst month of the new year. In January 2021, the National Composite Index rose by 11.2% compared to its year-ago levels,” says Craig J. Lazzara,Managing Director and Global Head of Index Investment Strategy at S&P DJI. “The trend of accelerating prices that began in June 2020 has now reached its eighth month and is also reflected in the 10- and 20-City Composites (up 10.9% and 11.1%, respectively). The market’s strength is broadly-based: all 20 cities rose, and all 20 cities gained more in the 12 months ended in January 2021 than they had gained in the 12 months ended in December 2020.

“January’s performance is particularly impressive in historical context. The National Composite’s 11.2% gain is the highest recorded since February 2006, just one month shy of 15 years ago. In more than 30 years of S&P CoreLogic Case-Shiller data, January’s year-over-year change is comfortably in the top decile. That strength is reflected across all 20 cities. January’s price gains in every city are above that city’s median level, and rank in the top quartile of all reports in 18 cities.

“January’s data remain consistent with the view that COVID has encouraged potential buyers to move from urban apartments to suburban homes. This demand may represent buyers who accelerated purchases that would have happened anyway over the next several years. Alternatively, there may have been a secular change in preferences, leading to a shift in the demand curve for housing. Future data will be required to analyze this question