Prop. 19 will reduce or eliminate some generous tax breaks that families get when property is transferred between parents and children. But it won’t change the rules for trusts themselves.

Some transfers are exempt from reassessment. Transfers between spouses are always exempt.

Another exclusion applies to transfers between parents and children, and between grandparents and grandchildren if the parents are not alive. For simplicity, we’ll assume here the transfer is from parents to children, but it also works in reverse.

Under current law, parents can transfer — by sale, gift or inheritance — their primary residence to their children and it won’t be reassessed, no matter how much it’s worth or how the kids use it.

In addition to a primary home, each parent can transfer “other property” — such as a vacation home, rental or commercial property — and exempt up to $1 million in assessed value (not market value).

Prop. 19 changes these rules on parent transfers that take place after Feb. 15 in the following ways:

Prop. 19 is not retroactive and won’t apply to any property until it is transferred (or deemed transferred) after Feb. 15.

When property is placed in a trust, assessors will “look through” the trust to determine whether a change of ownership has taken place.

If it’s a typical revocable trust, also called a living trust, whoever set it up (called the grantor, trustor or settlor) is deemed to be the owner as long as that person is alive. Putting property in, or taking it out of, a revocable trust won’t trigger reassessment because the beneficial ownership has not changed.

“It’s the same as owning it” in your own name, said Chelsea Suttmann, an estate planning attorney with Barulich Dugoni & Suttmann Law Group.

When the grantor dies, however, the trust becomes irrevocable and the property is deemed to have been transferred to the new beneficiary or beneficiaries. This generally will trigger a reassessment to market value, unless it qualifies for a parent-child, spousal or other exclusion.

If this transfer takes place before Feb. 16, the current parent-child exclusions apply. If it takes place on or after that date, the new rules will apply.

If a couple sets up a revocable trust in a way that full ownership of the property transfers to the surviving spouse, it won’t be reassessed when the first spouse dies. “The spousal exclusion will apply,” said Steve Hartnett, director of education with the American Academy of Estate Planning Attorneys.

In this case, the trust will become irrevocable when the second spouse dies.

What if the trust was irrevocable when it was set up? It’s very hard to say, because these trusts are not standardized.

But in general, the county assessor will determine who is the “beneficial owner” of the property. This is generally “anyone who has a claim on income or principal from the trust,” said Bradley Marsh, a tax attorney with Greenberg Traurig. If it’s not the grantor, the assessor may determine that a transfer took place when it was placed in the trust.

In the simplest case, where parents set up and transfer property into an irrevocable trust and the first beneficiary is a child, “because you cannot revoke it, it’s a change of ownership at that moment,” Marsh said. “You would need to file your parent-child exclusion.”

Some parents are transferring investment property to their children in an irrevocable trust before Feb. 16 so they can get the parent-child exclusion before it expires.

“Because the estate and gift tax exemption is so high, they want to make that transfer now, if the parents don’t need the income,” said Yin Ho, a real estate attorney with Withersworldwide.

Parents wanting to do this should not retain any rights to the property, except possibly the power to shift assets among the children who qualify for the parent-child exclusion, Hartnett said.

Remember that before Feb. 16, the exclusion applies to only $1 million in assessed value per transferor on property other than a primary residence.

The downside of transferring assets to children now (within or outside a trust) is that the children generally will lose the step-up in basis that applies to appreciated assets when the owner dies. This huge tax benefit lets heirs avoid tax on the capital gains that occurred during the owner’s lifetime.

Attorneys say there may be ways to preserve the tax base and the step-up in basis, but they are too esoteric to get into here.

Not all irrevocable trusts convey ownership. For example, if parents put property into a trust for their own benefit during their lifetimes and thereafter for the children, “in that case the assessor would not consider it a change of ownership until the parents passed away,” Marsh said.

Some readers asked whether changing the trustee would trigger a change in ownership for property taxes. The answer is no. By the same token, keeping the same trustee won’t prevent a reassessment if there is a change of ownership. “The trustee is totally immaterial,” Ho said.

Suttmann pointed out that Prop. 19 won’t affect people who own property in a corporation, limited liability company or other legal entity. “They are under different rules,” she said. 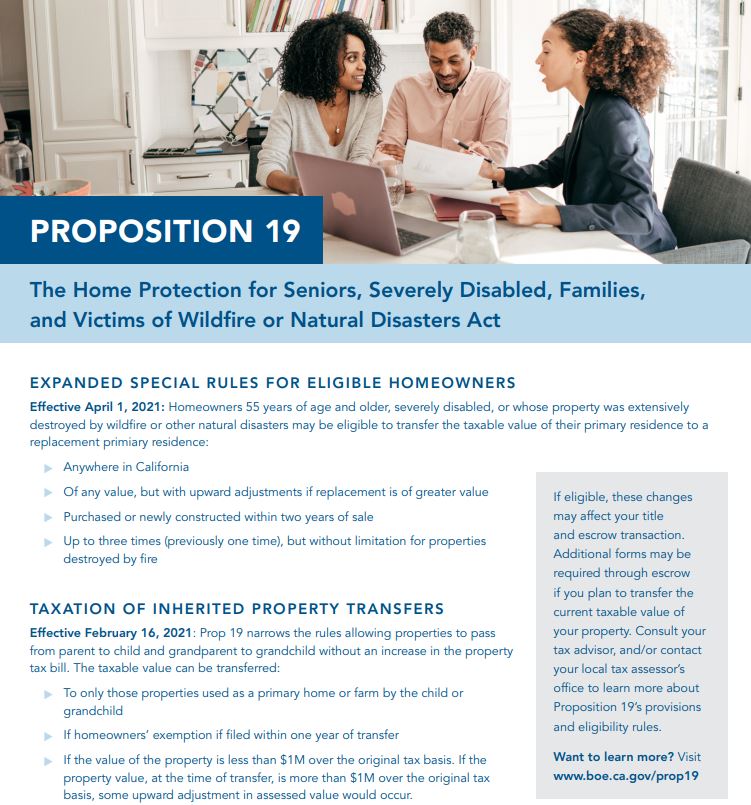