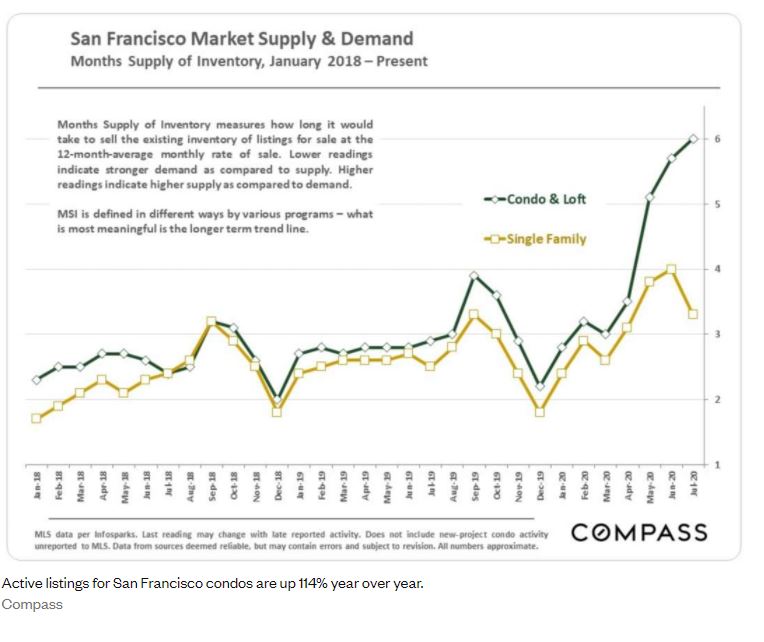 Market conditions are subject to change!  Hat tip to just some guy for sending in this article:

In five years as a San Francisco real estate agent, Emily Beaven has never experienced such a dry spell. She has several condos on the market right now that she’s representing and she has no offers and zero showings scheduled for them.

She decided it was time to get creative.

“We’re not even getting calls on things. It’s a bit of a ghost town. Then I started to see the incentive trend happening, ” Beaven said. “When you’re not in a super-strong seller’s market, when properties need that extra boost, that’s when [incentives] happen. We’re entering a period of desperation.”

Incentives are designed to entice the buyer or the buyer’s agent to get a property sold as soon as possible. Pre-pandemic, a higher commission for the buyer’s agent was a common incentive, as were restaurant gift cards, but when Beaven saw roundtrip tickets to Paris advertised recently as an agent incentive, she said they’d entered a new era.

As an incentive to purchase one of the SoMa studios she has on the market, Beaven is throwing in a session with a home organizer to help the prospective buyer maximize the small space.

Active listings for San Francisco condos are up 114% year over year, according to Compass, and while condo listings typically exceed single-family home listings, there are now two condo listings for every single-family home listing. With supply at an all-time high, the average price per square foot has decreased 4% since 2019 and the amount of buyers overbidding asking prices is considerably diminished from levels seen in the past six years.

While that doesn’t mean we’re in a buyer’s market yet, that could change within a few months. Typically a buyer’s market exists at eight or more months of inventory. San Francisco is at six months right now.

Natalie Rome and Derek Chin had a condo listing in Hayes Valley that hadn’t received much interest in two weeks. That’s when the two started to talk about new ways to incentivize buyers and remembered that the garage space could only fit a subcompact car. Rome and Chin approached the current owners, who had purchased a Fiat 500 when they moved in, about including it in the sale for the right offer. They said yes.

“I think we’re going to see more creative incentives in the short term,” Chin said. “A lot of condos are vying for attention. Money talks for sure. A consultation for an interior designer, gift cards to home furnishings stores. I heard once an agent paid for flower delivery for every week of a year.”

For agent Rick Teed, that meant something you can’t get just anywhere. On a recent listing for condos in Russian Hill, he said one lucky buyer’s agent would win $500 in Bitcoin when they came to view the property. “I just feel like people always do the same things, 3% commission and an airline pass. I don’t see that working right now,” Teed said. “You have to look ahead at what’s happening in technology. You want to give them something they don’t have that piques their curiosity.”