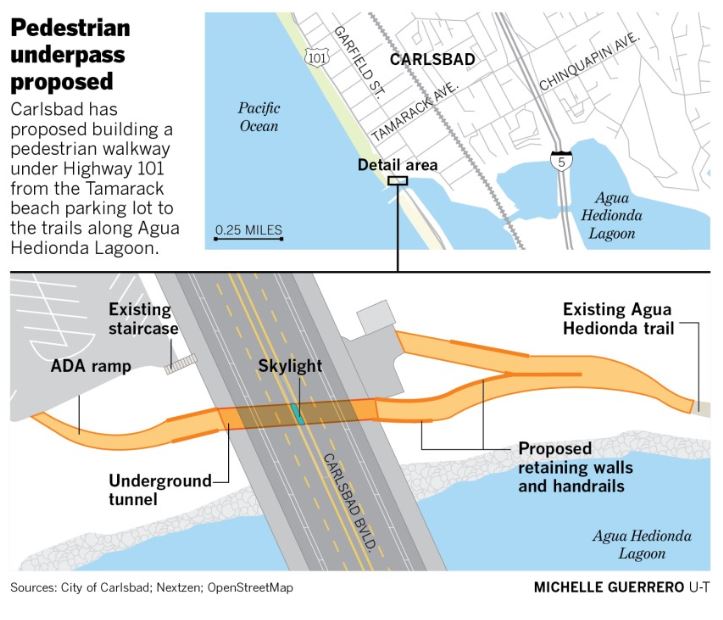 For a city that has $100 million-plus in the bank and paid $16 million in 2001 for the Farmers Insurance building that still sits vacant, spending $3 million on this must be seen as pennies?

CARLSBAD — Questions about safety, costs and the possibility of flooding appear to have stalled plans to dig a pedestrian tunnel beneath Carlsbad Boulevard to connect the Tamarack State Beach parking lot with trails along Agua Hedionda Lagoon.

The Carlsbad City Council agreed last week to proceed to the next stage of work on a proposal to build two access ramps to the beach, but they decided to hold off on the $3 million tunnel portion of the project until they have more information about other options.

Councilwoman Cori Schumacher said she was “uncomfortable” with the tunnel. Over the years, it could be affected by storms and sea-level rise, she said, and she asked whether a road-level pedestrian crossing would require less long-term maintenance.

Other council members also had questions about including the tunnel in the beach access project.

“My main concern is the maintenance,” said Councilman Keith Blackburn, who asked about lighting, public safety, graffiti and trash in the passageway.

Maintenance details have not been worked out yet, but after the tunnel is built a private contract could be issued to cover those details, said Parks and Recreation Director Kyle Lancaster. A gate could be installed to close the tunnel at night or during storms and high tides.

The most likely alternative appears to be an at-grade pedestrian crossing with flashing lights to be built as part of a separate project to improve the nearby intersection of Carlsbad Boulevard and Tamarack Avenue. The tunnel would separate pedestrians from highway traffic and allow the continual movement between the beach lot and the lagoon trails, which are maintained by the Agua Hedionda Lagoon Foundation.

A landscaped ramp on the eastern side of the tunnel also would connect the tunnel and the lagoon trail to the sidewalk on Carlsbad Boulevard.

“We really just think it is a tremendous look and could provide great benefit” to the public, Lancaster said.

City staffers and consultants have been working on the Tamarack Beach access project for several years. The only access to the beach is from stairways at the top of the seawall or from ramps at each end of the seawall that are too steep to meet requirements of the Americans with Disabilities Act.

Part of the access project is to replace one or possibly both of the ramps with longer inclines that start farther north on the bluff.

On the northern end of the seawall, the Pine Avenue ramp to the beach would begin from the parking lot at the end of Ocean Street. At the other end, the Tamarack Avenue ramp would start north of the stairway nearest the state beach parking lot. Design, environmental work and construction for each ramp is expected to cost about $2.8 million.