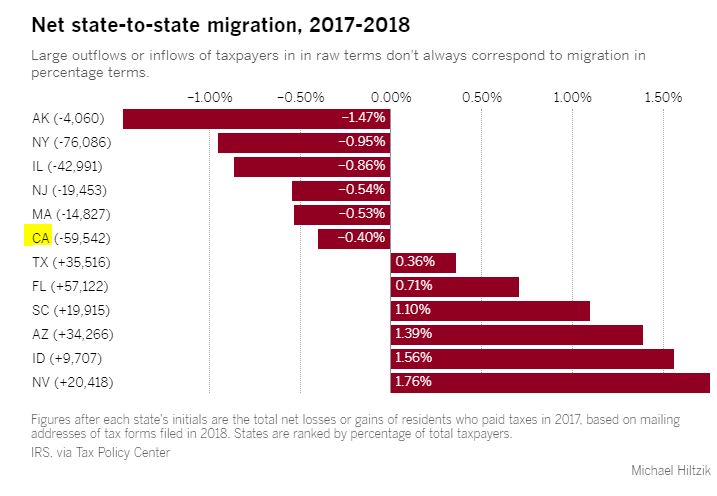 Excerpts from the latimes article:

Ever since the SALT cap went into effect in 2018, the hunt has been on for signs that it has prompted more wealthy residents to move from high-tax to low-tax states.

“Despite some recent claims that it has,” Lucy Dadayan of the Tax Policy Center wrote on Feb. 10, “the data available support the view that ‘We don’t have any idea.’”

News articles crop up from time to time about things like surging purchaser interest in Florida condos from residents from New York or California. But they’re anecdotal, not data-driven. It’s hard to say whether the interest doesn’t reflect the pretax bill trend or bargains left over from a lengthy Florida real estate slump.

“Migration has been a problem for a number of years,” Dadayan told me. “SALT cap or not, New York has to be concerned about losing people.” Internal Revenue Service statistics show that New York lost more than 76,000 taxpayers from 2017 to 2018, nearly 1% of its taxpayers and the largest outflow among high-population states.

But as Dadayan observes, attributing that migration to concerns about high taxes in general or the SALT cap specifically is another matter. The top destination for fleeing New Yorkers in recent years has been California, which has a higher top income tax rate. “Migration is not necessarily determined by taxes,” she says.

Pinpointing the relationship between the SALT cap and interstate migration is difficult for several reasons. One is that it’s too early to tell. The Internal Revenue Service has released taxpayer data only through the 2017 tax year; statistics for 2018 tax payments won’t be available until December.

The IRS bases its figures for interstate migration on the mailing addresses of tax forms; its latest figures are based on tax forms filed in 2018, but they apply to taxes paid in 2017 — before the tax cuts went into effect.

A good example of how things aren’t so simple came from Chipotle Mexican Grill, the fast-food company that recruited Brian Niccol from Irvine-based Taco Bell to be its new CEO in 2018.

Among the terms of Niccol’s deal was that the company would move its headquarters from Denver to Newport Beach, where he was living, even though California has higher property taxes than Colorado and nearly twice the per capita income tax burden.

The disparity is even greater for multimillion-dollar earners like Niccol. Colorado’s personal income tax is a flat 4.63% — in other words, for every million dollars Niccol earns after his first million a year, he’s paying $133,000 as a California resident but would pay only $46,300 in Colorado.

On the other hand, Niccol’s daily commute became even shorter than it was when he had to travel from Newport Beach to Irvine. And he didn’t have to relocate his three school-age children. These evidently were more important factors than taxes. (Of course, Niccol’s demand created problems for Chipotle’s 400 employees in its Denver and New York offices, which were closed.)

Among the non-tax rationales for interstate moves, retirement, “family” and jobs tend to rank high, according to an annual survey by United Van Lines. Retirement was cited in last year’s survey by nearly 25% of Californians moving to other states, and only 11% of those moving into California. Indeed, the state experienced a net inflow of residents aged 18 to 54, but a net outflow of those 55 and older —that is, nearing or already in retirement.

But in Arizona, where about twice as many people moved in as those leaving, retirement was the most frequently cited reason for in-migration. The state achieved a rough balance of inbound and outbound migrants for all age groups below 65, for whom the balance tipped decisively in favor of newcomers.

Employment was often cited by departing Arizonans as their impetus for leaving. By contrast, jobs were by far the most-cited reason for people coming in to California, mentioned by nearly 60% of the newcomers.

The SALT cap may well bare its teeth, in time, restraining state and local policymakers from further tax increases and creating a flow of well-heeled economic immigrants. But the signs of it haven’t appeared yet.