Buyers Getting Shut Out 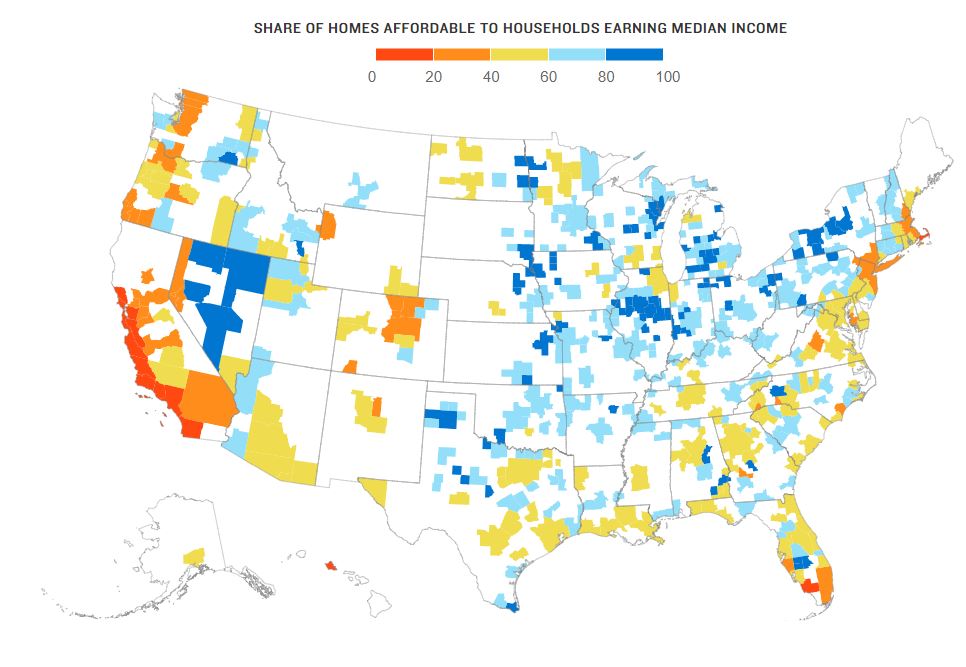 Where to move by color! Just find an affordable blue area that suits you.

Ten years after the housing collapse, a new and different housing crisis has emerged.

Back then, people were losing their homes as home values crashed and homeowners went underwater. Today, home values have rebounded, but people who want to buy a new home are often priced out of the market. There are too few homes and too many potential buyers.

Home construction per household is now at its lowest levels in nearly six decades, according to researchers at the Federal Reserve Bank of Kansas City. This isn’t just a problem in San Francisco or New York, where home prices and rents have gone sky-high. It is also a problem in midsized, fast-growing cities farther inland, like Des Moines, Iowa; Durham, N.C.; and Boise, Idaho. In Boise, an analysis by the U.S. Department of Housing and Urban Development showed there is a demand for more than 10 times the number of homes being built right now.

Jennifer St. John has lived all her life in Boise. The city she was born in was a sleepy, tree-lined river town surrounded by farms and mountains. It’s hard to recognize today.

“A lot of the areas that were fields and farms are now full-on neighborhoods,” said St. John, “and corners that were out in the boondocks — and why would you ever go there? — are now a booming part of town.”

The boom didn’t really get personal for St. John until last year, when she decided she was ready to buy her first house. She’s 37 and manages a learning center for kids who have autism. She’s solidly middle class and can afford a house that sells for $200,000. But the median home price in Boise right now is nearly $100,000 higher than that, putting it out of reach for St. John and for the average homebuyer in Boise.

“It’s been hard for me,” said St. John. “I’m single, there’s only one income in my home and I don’t want to share my house with roommates.”

So how did we get here, especially in cities like Boise that have long been affordable?

One answer lies in the immediate aftermath of the Great Recession, when home building ground to a virtual halt. The rebound has been slow and painful. Single-family home construction is now at its lowest rate in four decades.

Housing experts tick through a list of reasons for the slow pace: There’s tougher zoning, there’s not enough undeveloped land, lumber is expensive … and one of the biggest problems, a labor shortage.

Robert Demaray, a contractor in Boise, can attest to a lack of construction workers: “It’s been real tough to find help. Thank goodness my two sons work with me,” he said. With not enough workers, it’s taking about two to three months longer to build homes today than it would have in 2006, before the recession.

Demaray said younger people aren’t going into the trades like they used to. And those workers who are here and available are hard to keep. “The guys chase dollars, you know, ‘This guy over here, he’ll give me a dollar more an hour so I’m gonna go,’ ” he said.

Builders can’t finish homes fast enough to keep up with demand. All of this means prices for existing homes on the market are going only one direction — up, sometimes stranding people in their current homes even if they desperately want to move.

In Beaverton, Ore., Manish Gooneratne feels stuck in his home.

“We bought in May 2017 when home prices in our area had reached levels compared to 2007,” he said. “As of one year ago, our home is estimated to have appreciated in value by $10,000 to $12,000. This is great, but since we barely squeezed back into the market, we doubt we’d be able to get back in even if we sold with a profit.”

Marjie and Ben Vick in suburban Denver have been in their current house for four years. Their property has almost doubled in value since they purchased it.