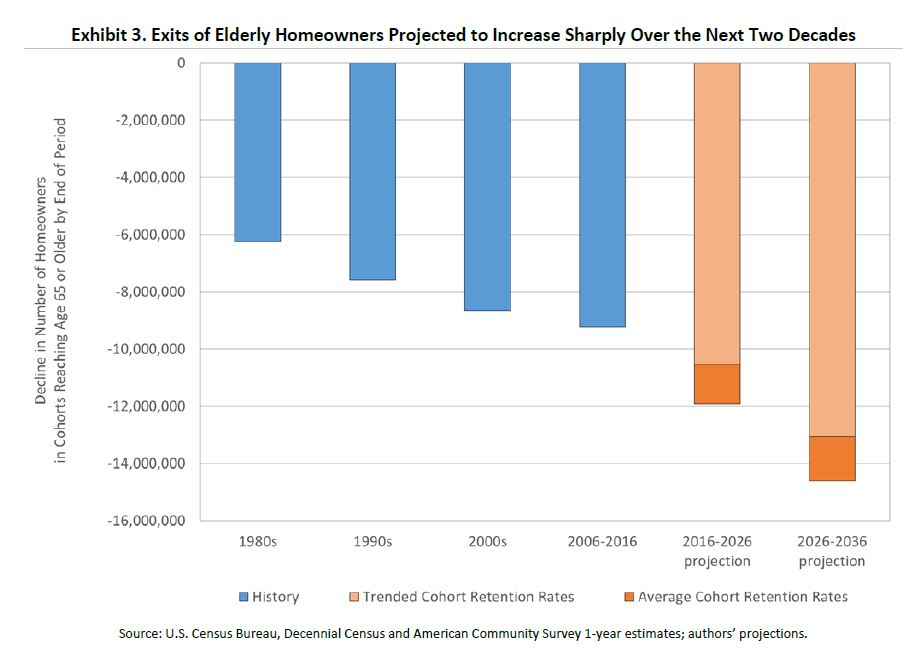 As boomers grow older, it’s inevitable that their housing transitions will affect the real estate market.  But it seems spread out enough that the impact will be digested….at least at some price. There will probably be times when a few old homesteads in the same area are sold at the same time, but it should all even out in the long run.

The Baby Boom generation (1946-1964) has an enormous housing market footprint, inhabiting 32 million owner-occupied homes and accounting for two out of five homeowners in the United States with an estimated value of $13.5 trillion. And when they decide to divest, said Fannie Mae, Washington, D.C., the impact could spur fears of a “bursting generational housing bubble.”

In a report, The Coming Exodus of Older Homeowners, the Fannie Mae Economic and Strategic Research Group said departures of these older adults from the homeownership market–for rentals, senior care facilities or by reason of death–will accelerate as the large Baby Boom generation continues to age.

“With the oldest Boomers now advancing into their 70s, the beginning of a mass exodus looms on the horizon, spurring fears of a bursting ‘generational housing bubble’ in which homeownership demand from younger generations is insufficient to fill the void left by multitudes of departing older owners,” wrote authors Dowell Myers, professor at the University of Southern California; and Patrick Simmons, Fannie Mae Director of Strategic Planning. Further, the authors warned a “fumbled” intergenerational handoff “would reverberate through the housing market and economy.”

Having said, that, the authors note Baby Boomers have not yet begun to depart homeownership in substantial numbers; in fact, the number has increased over the past several years, according to Census data, “indicating no diminishment in the intensity of Boomer homeownership demand.”

By using cohort analysis–and more specifically by examining retention rates for past cohorts of homeowners as they advanced through their elderly years over the last few decades–the authors can predict more accurately when the Baby Boomer “exodus” is most likely to pick up. They predict the number of older owner-occupants who exit homeownership between 2026 and 2036 is projected to total between 13.1 million and 14.6 million, an increase of at least 42 percent over the number of older homeowners who exited during the past 10 years.

“Although Baby Boomer homeownership has been stable so far, the ranks of Boomer owner-occupants will eventually contract as they voluntarily transition to other living arrangements or are forced to exit homeownership because of frailty or death, thereby triggering a rise in the number of older adults exiting homeownership,” the report said. “The coming acceleration of older adults departing homeownership adds urgency to industry and public policy efforts to facilitate a smooth handoff of housing assets from older to younger generations.”

Complicating future scenarios, the authors said, is the unpredictable nature of the Boomer generation. “Baby Boomers will not necessarily follow the same path of aging-related homeownership attrition as their
Predecessors,” they said. “However, steady trends in cohort homeownership retention rates for older adults across recent decades and economic cycles provide a reasonably stable footing for predicting when Boomers will begin to release their vast holdings of owner-occupied homes.”

How should the housing industry and public policy makers prepare for the coming wave of Baby Boomer homeownership departures? The authors take a pragmatic approach.

“First, it’s worth noting that not all homes vacated by Boomers in coming years will hit the sales market, as some will be bequeathed to heirs who opt to retain ownership,” the authors said. “Second, an increasing supply of homes vacated by Boomers that do end up on the market might be a positive, at least in the near-term. The supply of existing homes for sale has been declining for several years and homeowner vacancy rates have reached the lowest level in decades. More listings flowing into the sales market from the Boomers’ extensive reservoir of owner-occupied homes would help to alleviate the housing-supply crunch.”

However, the exit of Boomer homeowners “will occur on such a massive scale that it could alter the long-term demand-supply balance in ways that are negative for the home sales market and home prices,” the authors caution. “Thus, business and policy interventions designed to facilitate an orderly handoff of Boomer housing assets to the younger generations are worth considering.”

For example, given that most Baby Boomers express a preference for aging in place, one option for facilitating an orderly handoff is to provide home improvement financing options that help them adapt their current homes to the demands of aging, thereby extending the timeline over which they depart homeownership. Public policies might also facilitate the development of community-based services to support successful aging in place. “Furthermore, continuing technological advances in areas such as self-driving vehicles and robotic home care aides could eventually play a role in helping aging Boomers stay in their homes longer, thereby slowing future homeownership attrition for older adults,” the report said.

Additionally, cultivating sustainable homeownership demand among younger generations will also play a role in fostering a smooth intergenerational handoff. For example, in the past several years mortgages with lower down-payment requirements and more flexible debt-to-income ratios have been introduced that should help to promote first-time home purchases by Millennials, thereby launching them on homeownership careers that will enable them to grow equity and that might eventually put them in position to purchase homes vacated by Boomers.