October sales in San Diego County were down 12% year-over-year, and the freefall should continue.  While the experts will keep pointing to housing being not as affordable now that rates and prices are up (this article states that the median-priced San Diego home in October costs an additional $321 per month this year), the plummeting sales can also be attributed to sellers being comfortable waiting for that perfect couple with 2.2 kids to come along.

This article also mentions that the current inventory is 46% higher than it was last year, but on the MLS the total number of 2018 listings for the county is only up 8% YoY, which demonstrates more standoff conditions – sellers are waiting and listings are stacking up.

Add the buyers’ unaffordability to lowly-motivated sellers and we have the perfect ingredients for standoff stew. 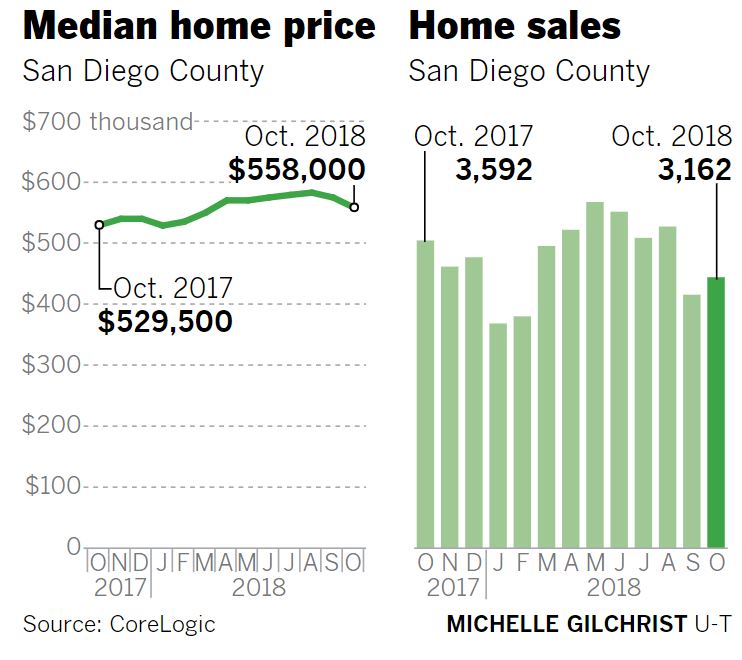 “I think the boom is over,” said financial analyst Rich Toscano, who predicted the housing crash in November 2005 on his housing blog Professor Piggington’s Econo-Almanac.

He said price declines in the fall are typical and not that big of a deal, but the concern for the market is how rapidly the number of homes for sale went up while sales also dropped.

Toscano, an analyst with Pacific Capital Associates, said the market has been driven in recent years by an intense supply and demand imbalance that drove up prices.

“Home prices got really high based on this perpetually low inventory, and now that’s gone,” Toscano said. “Can prices be supported at this level? I think you could make the argument with more inventory and less demand that prices will back off a bit.”

He said current market conditions were much different than before the housing crash: The cost of homes compared to rents or incomes is not nearly as out-of-whack as it was in 2006, it’s much tougher now to get home loans and mortgage interest rates aren’t as high.

Andrew LePage, CoreLogic data analyst, said fall and winter may make for a good time for buyers, but it doesn’t change the fact that prices are still very high for many buyers.

“Fall-winter home shoppers could find a much more favorable shopping environment,” he wrote in the report, “but many will still be hit by the one-two combo of higher prices and mortgage rates.”

“Sellers are getting a little nervous that their time has come,” he said. “At the same time, I advise everyone to look at the information. Even the California Association of Realtors are projecting an increase in price next year. It’s just the acceleration that is decreasing.”

Nathan Moeder, principal with real estate analysts London Moeder Advisors, said the market is reacting to rising mortgage interest rates. Sellers are trying to get their homes on the market because they want to get the most they can before interest rates go up even more, and buyers are holding off to see what happens with home prices and interest rates.

“Right now, the fact there is a lot of inventory compared to previous Octobers, that tells us people are testing the market if they can sell it because they know they are at the peak,” he said. “But, I think there is some market resistance because there are only 3,162 sales.”

Moeder said the only way he could see an actual market crash happening is if interest rates hit 8 percent.

That means the monthly payments for October’s median priced home have gone up $321 a month.

Southern California sales were their lowest since October 2011 with sales down on a year-over-year basis for the third consecutive month. Still, prices were up 6.1 percent in the 12-month period.

San Diego County’s year-over-year drop in sales, 12 percent, was the most out of the six counties.