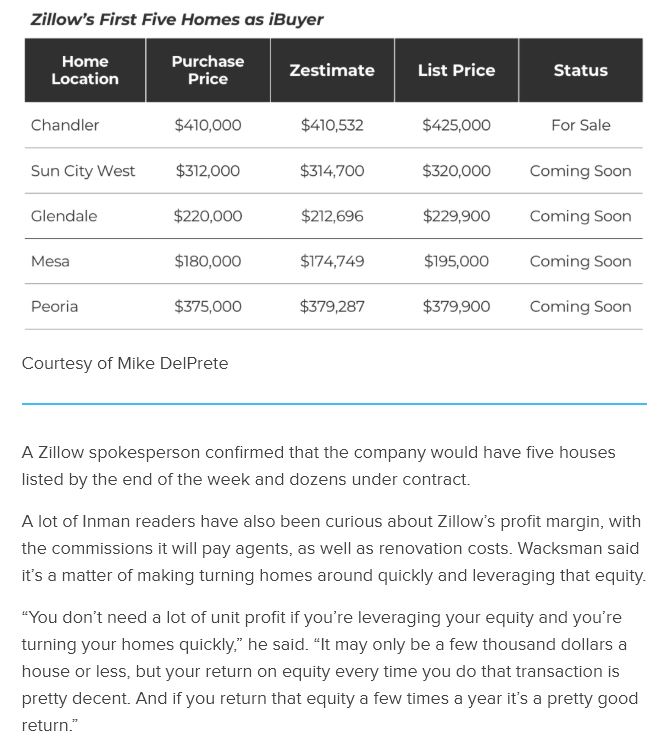 This might be the greatest sucker play in the history of housing.  The I-news featured a story about the first five Zillow buys in Phoenix, and as you can see above, they are planning to lose money on all of them.

The reporter also interviewed one of the homeowners who sold.  She said that her offer from Zillow was higher than the other ibuyers (Opendoor and Offerpad).  What a great way to enter an already-competitive market.  Make headlines about offering the most money, and don’t look like you’re gouging the homeowners – heck, they look like Robin Hood!

The publicity should fuel a surge of interest in homeowners wanting to sell to Zillow, and the story mentions that they are expanding their staff to 50 people in Phoenix to handle the ‘stronger-than-expected’ demand.

It could just be a ploy to load up their Premier Agents with listings, and/or to gain advantage over the other ibuyers.

Will they eventually resort to flat-out lying to people like all the rest of the real estate advertisers these days?  Here’s an example, where they say they will pay ‘fair market value’ (how do you know if it never hits the open market), and no mention that their fees are 6% to 13% – but at least they tell you that they will hammer you for repairs once the deal is in play: