‘Litter On A Stick’ 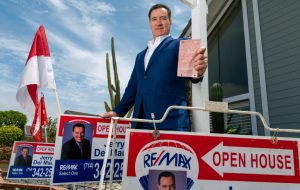 We won’t police ourselves, so…..

Hat tip to SM for sending this in:

Jerry Del Mauro hoped to score a $1.4 million sale last month when he staged an open house near the water in Huntington Beach.

Instead of a sale, the Re/Max agent got a $2,750 fine for putting out too many open house signs.

Del Mauro said he had no choice. The house sat on an island at the end of a semi-desolate street almost 2 miles from the nearest traffic light. To guide buyers to his open house, he put out some 18 signs — 11 more than the city typically allows.

A city code enforcement officer spotted the signs and issued a citation, fining him $250 per “excessive” sign.

City officials are “Nazi Sign Police,” another commenter said, and a third called the citation “a Communist joke.”

The case is one of the more extreme examples of ongoing tensions between real estate agents and city officials throughout the region – and across the country.

On the other side of the controversy are city employees who have been inundated with citizen complaints about the virtual forests of open house signs sprouting up on corners, median strips and curbside over the past three years, fueled by a frenzied housing market.

“We have received pushback from residents,” Huntington Beach code enforcement Supervisor Rich Massi said in an email. “A few Realtors … started to blanket the city with open house signs at various locations, which created a nuisance and blight.”

Massi said several other agents also have been cited for violating city sign policies, with fines ranging from $250 to $3,000.

Similar tensions have cropped up in cities throughout the region, and across the country.

“We are being bombarded, and Realtors aren’t taking their signs down,” said Lula Davis-Holmes, a Carson councilwoman for 11 years. “It became an eyesore. And it became a public safety issue.”

In February, a Tulsa, Okla., city councilman called all temporary signs — including open house placards — “litter on a stick” and sought to have them banned on public rights of way, the Tulsa World reported.

“My impression from real estate agents is those signs attract more lookie-loos than actual buyers,” she said.

But Kissinger, the South Bay Realtor official, said they may be antiquated, but signs remain the most effective way to draw buyers to an open house.