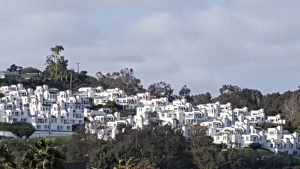 Compared to previous years, the detached-home sales between La Jolla and Carlsbad are holding up remarkably well.  With the significant increase in pricing, we can’t expect sales to equal previous Aprils, so 260 is pretty strong:

I’m sticking with my prediction of NSDCC 2018 sales dropping 10% YoY.

Here are the sales totals for January through April:

As long as we can keep generating millionaire buyers organically, or import them from a far (mostly retirees), we’ll be fine.