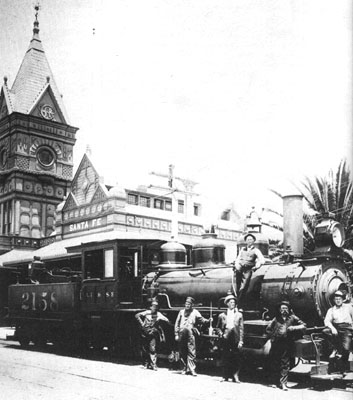 This is a brief history of the growth of San Diego from a sleepy mission village to a major agricultural and shipping center. Credit for this transformation goes to two men, Alonzo Horton and Frank Kimball, and an unheralded railroad, the California Southern. The construction of this railroad poured millions of dollars into San Diego and led to a vast population expansion as men came to work on the line. National City, just south of San Diego, experienced immediate growth as terminal of the line and home of the railroad yard, shipping wharf and machine shops. The California Southern proved a pivotal pawn in the breakup of the Southern Pacific monopoly in California by the Atchison Topeka Santa Fe railroad.

The subsequent rate war between the two giants led to a tremendous real estate and population boom in Southern California in the 1880s. The California Southern, with its link to a transnational railroad, proved crucial to the transformation of San Diego from a farming community to a small city of emerging industry and mercantile expansion. Unfortunately the hopes of the citizens of San Diego to create a port to rival San Francisco were not realized. Los Angeles grew even more quickly, and San Diego never reached the prominence for which it dreamed.