Towards the End of Cycle? 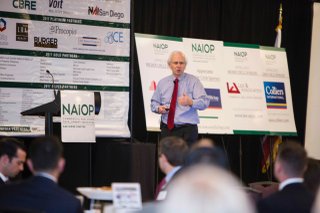 Predicting the future is hard. If it weren’t so challenging, we would all be super rich because we could predict winning Powerball numbers.

However, some people do take a crack at it — not predicting lottery numbers — but peering into the future to see what kinds of changes are likely on the horizon.

Christopher Lee, president and CEO of Los Angeles-based CEL & Associates, is one such person. His expertise is real estate, and he recently offered some insights into the future at a meeting of NAIOP San Diego.

For some time, he’s been predicting that we are getting close to seeing the real estate cycle to begin trending downward. We’re in the seventh inning, he’s said.

How does he know this? Real estate follows a familiar pattern, he said. He’s written on the subject in a paper called, “Real Estate Cycles: They Exist … And They Are Predictable.”

And what year is it?

That’s not all he sees. He predicts that the number of real estate brokers will fall by as much as 50 percent within a decade. They will be replaced by strategic business advisors.

And why is this? Because more and more people get their real estate information from online sources, such as Google. Brokers aren’t as necessary.

Lee believes the nature of the workforce itself is transforming as well.

“Work is being redefined,” said Lee, noting that we are moving toward an age when freelancers (from Airbnb hosts to Uber drivers) could thrive and where work will start to follow the worker and not the space. Although he expects some 10 million or more jobs to be lost to robotics, he said specialists and niche entrepreneurs with flourish in this new world of real estate.

These specialized workers will likely occupy less space and work from more than one place, according to Lee. Already, demand for office assets is slowing down. Lee cited a recent survey that showed 37 percent of workers did some or all of their work at home versus just nine percent in 1995. Another survey looking at millennials’ work preferences revealed that 81 percent want to choose their own work hours and, overwhelmingly, want a work-life balance and collaborative workspaces.

When looking at future retail needs, Lee predicted that eventually retail spaces could be rendered obsolete, but added that while overall retail portfolio sales are down, “location and market are critical,” which accounts for San Diego’s better-than-average performance in this sector.

“Eighty percent of shoppers look online before buying when making a big purchase in a store,” he said, pointing to other survey figures that say sixty-six percent of mobile shoppers comparative shop online while in a retail store, and only 41 percent of millennials shop in a traditional grocery store.

Lee has quite a few visions. Indeed, on his firm’s website, he lists 100 of them in a series of posts called, “The Real Estate Industry In 2025 100 Bankable Predictions You Need To Know.”

Google and Amazon may get involved — or purchase — a major real estate service provider, he said. If so, that will change the “competitive landscape dramatically.”

Remember how we’re getting close to a downturn. The good news is that we rebound between 2023 and 2028. He calls it the “Age of Globalization & Knowledge.”

Hey, we’re San Diego, home to one of the nation’s largest biotech clusters  …

Some of his predictions are not all that surprising given current trends. “Journalism, as we have known it, will substantially be gone, replaced by on-the-spot tweets, photos, videos and real-time reporting by citizens and self-interest advocates,” he writes. “Newspapers will be in rapid decline and the Internet will become the main source of information.”

Ask any newspaper reporter how he or she feels about jobs security ….

He also predicts we’ll become more of a cashless society, which is what’s been the story for sometime now.

In short, a lot is going on.

However, Lee got this one wrong:  “Expect significant tax reform, unlikely to occur until 2021 or beyond. Tax reform will not occur prior to a Presidential election (2016 and 2020).